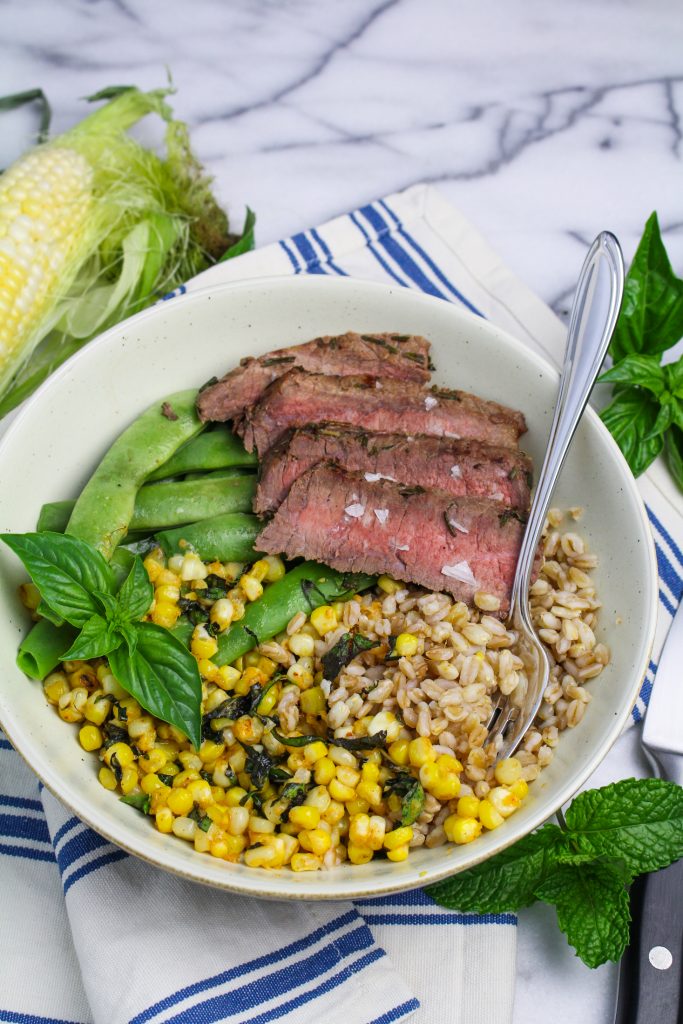 It’s hard to believe it’s already September. Even when you’re not a student and/or don’t have school-age kids, September still has that back-to-school feeling, doesn’t it? Maybe it’s just ingrained in us to start buying jeans and sweaters and new notebooks once September hits. Or maybe that’s mass marketing at it’s finest. Either way, September always feels like a little bit of a new start.

So, since I’m feeling the September-vibe as much as I did as an eager high school freshman, and since I have the luxury of being at home for a few more weeks, I’m launching a little health challenge here and on Instagram for the next few weeks. Every day I’ll be eating (and sharing!) some form of “bowl food,” whether it’s a smoothie bowl topped with fruit and coconut or a full-on meat+grain+veg combo like this one. 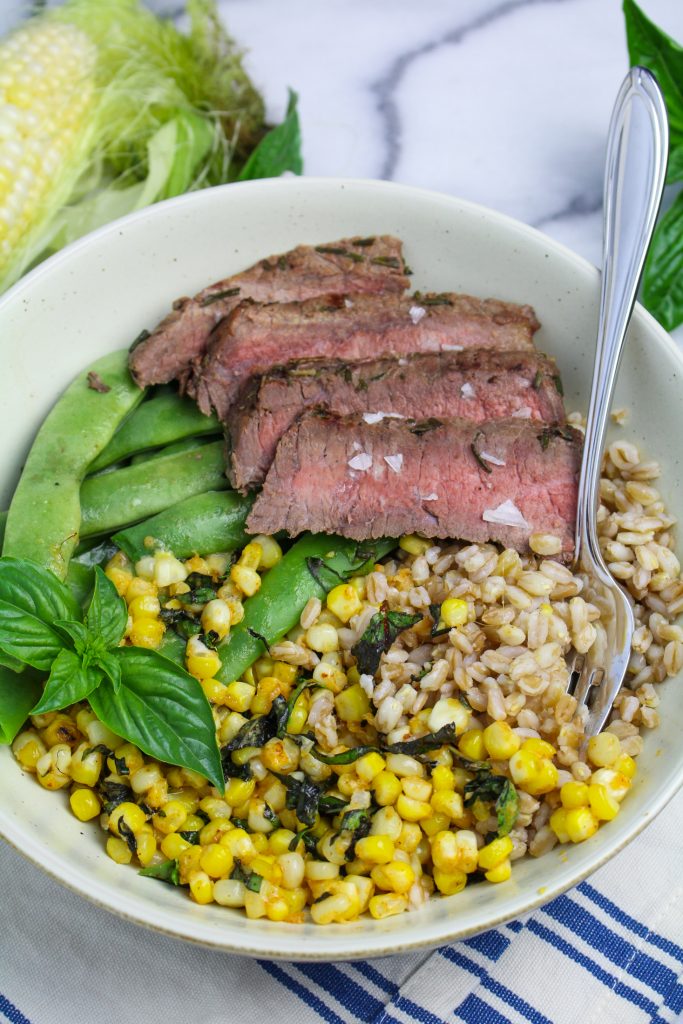 “Bowl food” seems to be all the rage right now, a trend that places like Sweetgreen and Dig Inn have really been able to capitalize on. Trevor thinks it’s a dumb trend – he argues that any food placed in a bowl becomes “bowl food” – and I see where he’s coming from. But to me a bowl is a distinct culinary thing, a combination of healthy but filling ingredients, placed together in a bowl but each maintaining their own flavors and textures. It’s different than a salad, and I can’t seem to get enough. In a nutshell, it’s going to be healthy around here, and it’s going to be delicious. Follow along on Instagram with #dailybowlchallenge (by the way, most existing permutations of #DailyBowl on Instagram were primarily about pot, which didn’t even cross my mind until I searched it. Sigh.) 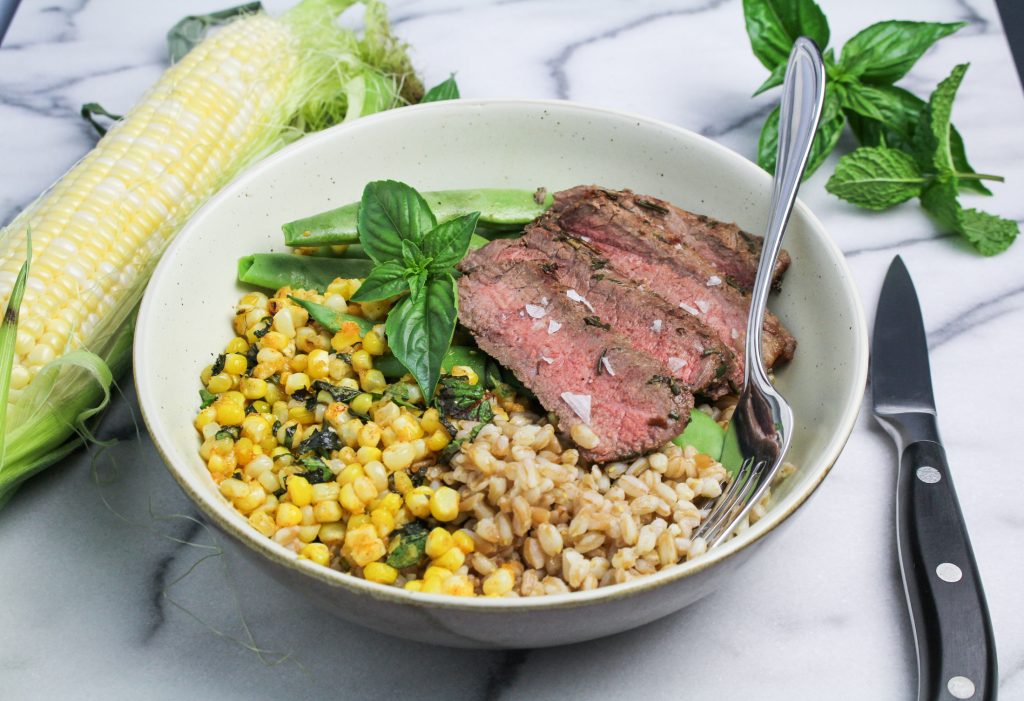 This first bowl is one that even Trevor grudgingly acknowledges is delicious (primarily because it contains steak, which can pretty much warm him to any meal). For me, the star of the show is the corn, which is so good at this time of year that I’m always nibbling it off the cob without cooking it. Elote, which is a Mexican street snack of grilled corn topped with mayonnaise, lime juice, chile powder, and grated cheese, is one of our all time favorite things to eat, so converting it into bowl form is a big win. Sweetgreen did offer an Elote Corn Bowl earlier this summer, but it had too many other vegetables and not enough cheese for my taste, so I had to make it my own. And by make it my own I mean add rosemary-and-olive oil grilled steak, barely cooked green beans, nutty farro, and tons of mint and basil. It’s summery and nourishing and a pretty good start to this little challenge, I think. 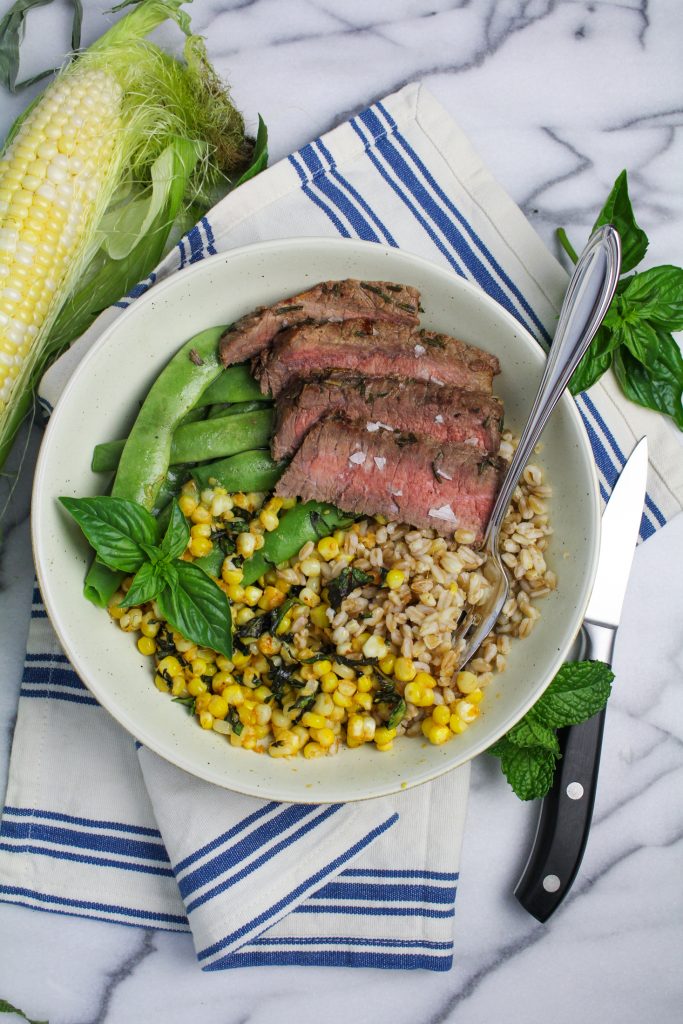