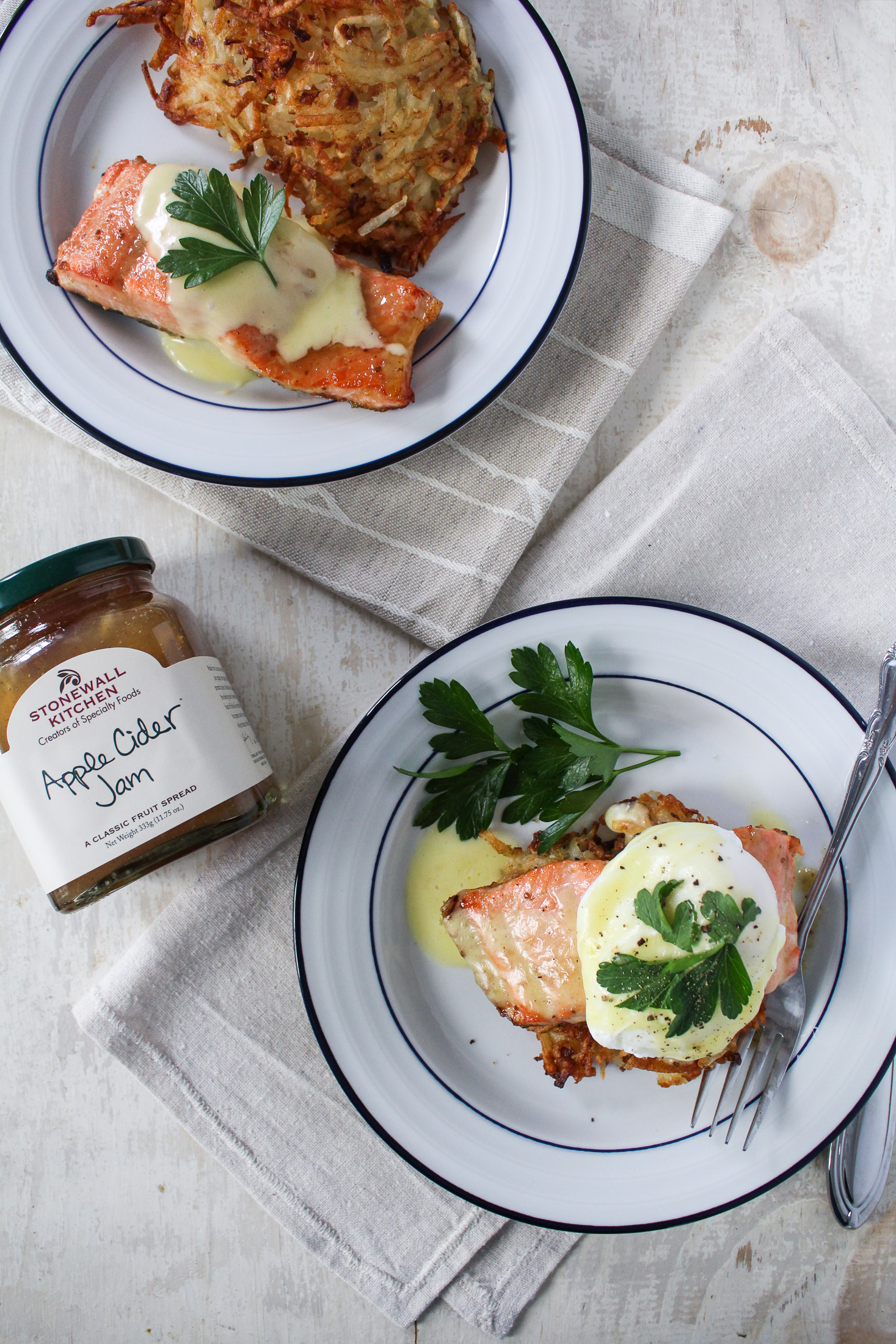 I’m quite excited to be collaborating with Stonewall Kitchen on this post. Stonewall is a well-loved New England brand, based out of York, Maine. They are probably best known for their jams and jellies, but they also carry a broad range of other specialty food products, from Bourbon Pecan Caramel Sauce (yum) to Butternut Squash Risotto Mix (yum) to Maple Bacon Aioli (double yum!). Having Stonewall products in my pantry always feels like a bit of a special treat – the kind of treat that inspires such scenarios as “oh, yes, I have raspberry hot fudge sauce in the fridge! I should definitely have some ice cream tonight.” And for other New Englanders, I can attest that visiting their store/production facility/cooking school in York is a worthwhile detour on any trip from Boston up north (or honestly, as a destination in and of itself). 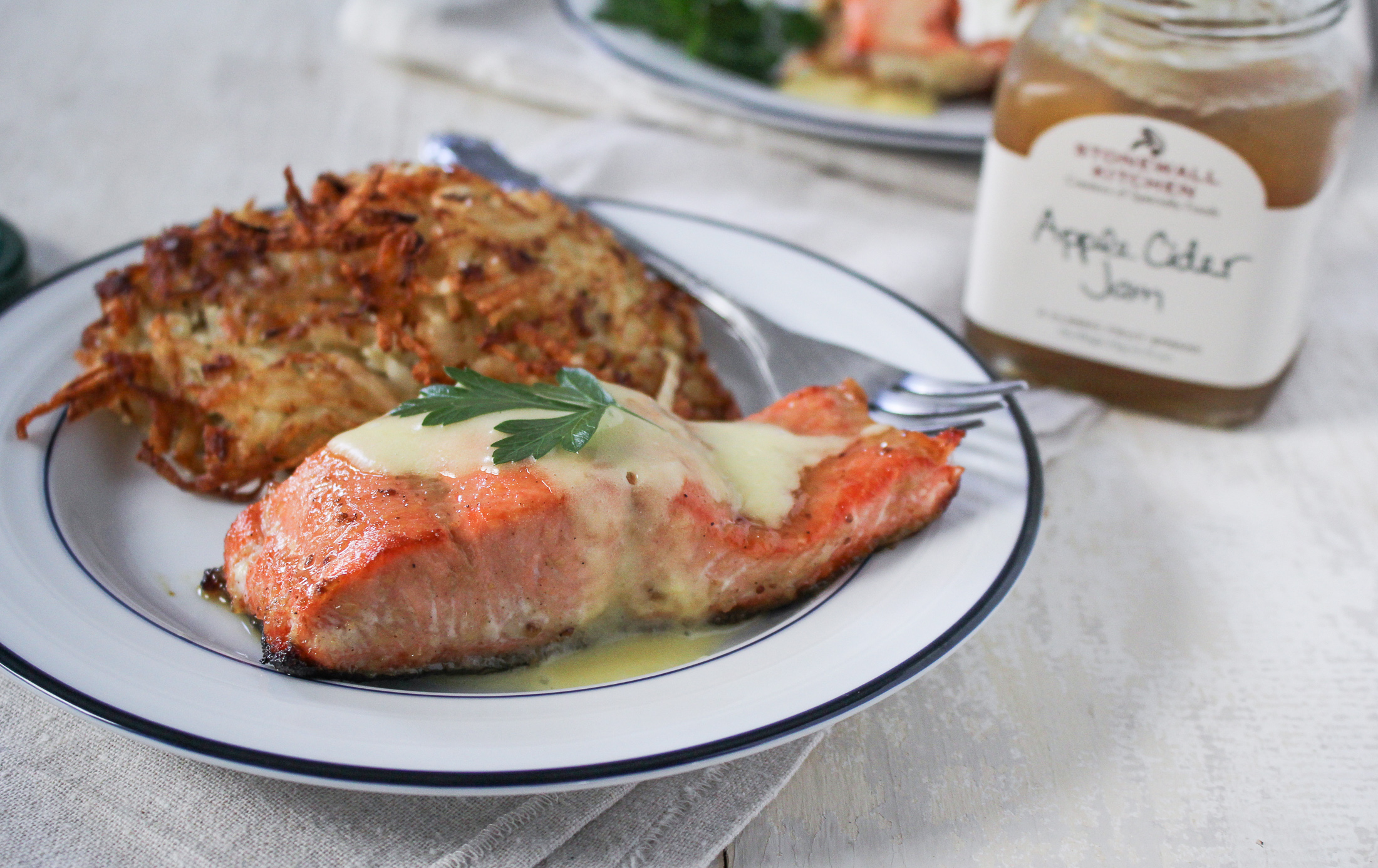 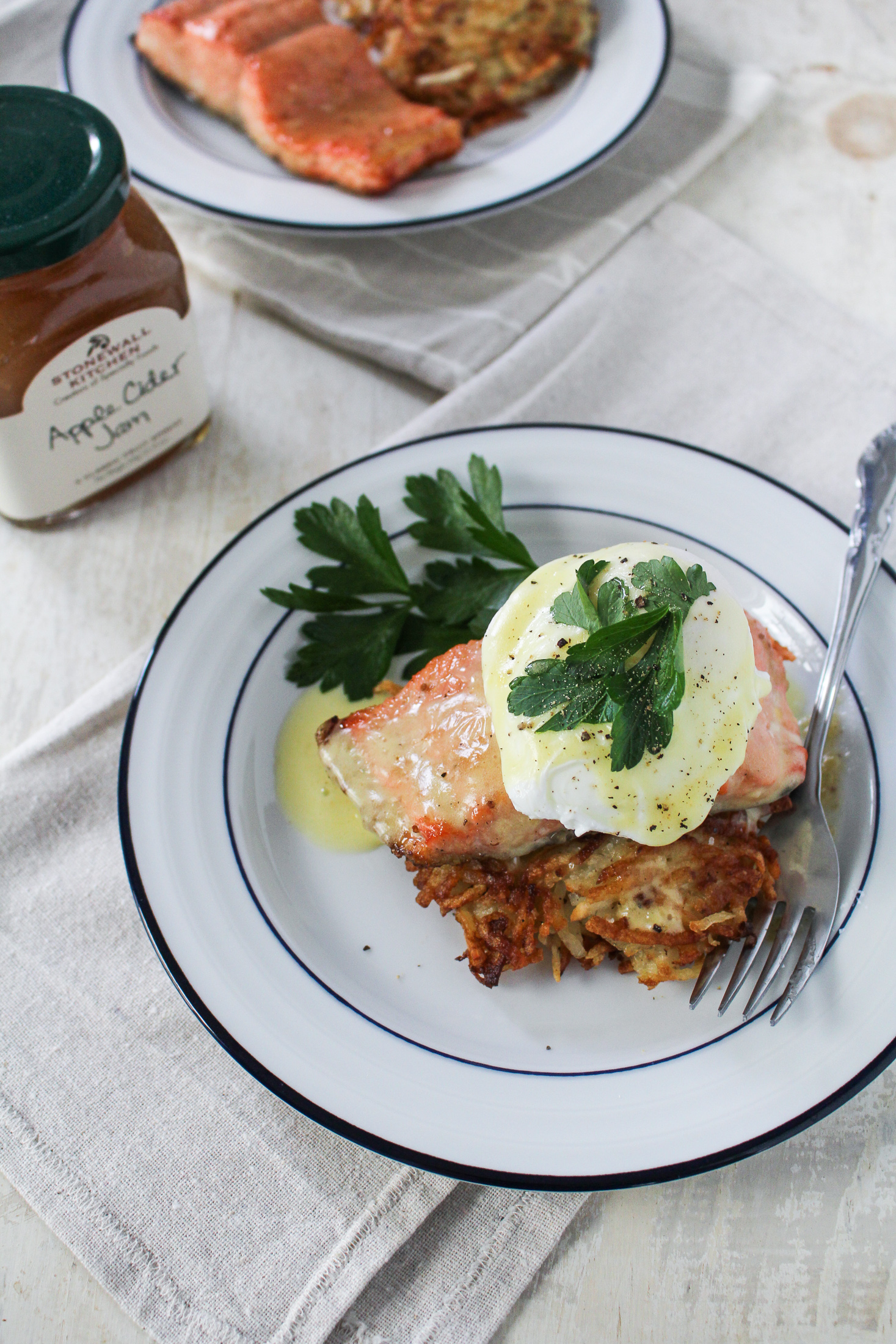 But I don’t want to gush too much lest you think I’m going to forget about sharing this delicious-looking brunch dish you see here. Right now everything seems like it’s fall, fall, fall. That’s true all over the U.S., I’m sure, but I have to imagine that the everything-fall-craze is especially prevalent here in New England, land of apples and brilliant foliage and quaint Vermont towns. Fall is by far my favorite season, and I’m so happy that I’m actually home for it – the first season of the year that I’m truly here for, in fact. Fall cooking is no small part of the reason that fall is my favorite, what with the abundance of squash and apples and cruciferous vegetables to roast and braise and stew. When the team over at Stonewall sent a list of fall products that I might be able to put to good use in a new Katie at the Kitchen Door recipe, the list read like a celebration of all the delicious autumnal flavors you could ever hope to pack into one kitchen: Apple Cranberry Chutney, Caramel Apple Butter, Maple Bacon Onion Jam, Butternut Squash Pasta Sauce, and so on. It was a hard list to choose from, but ultimately I couldn’t resist the Apple Cider Jam, which I knew would be absolutely delicious in a savory-sweet application. 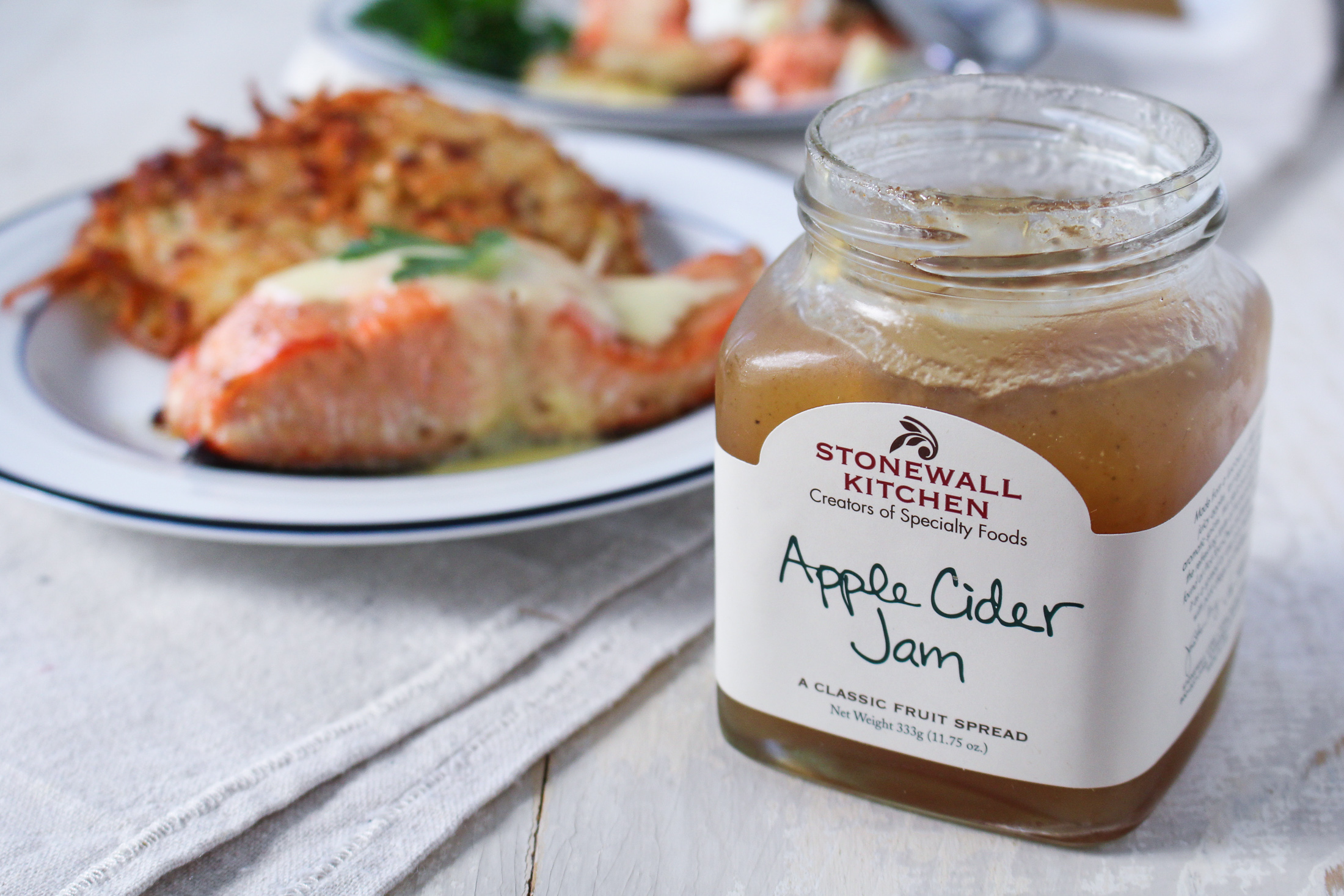 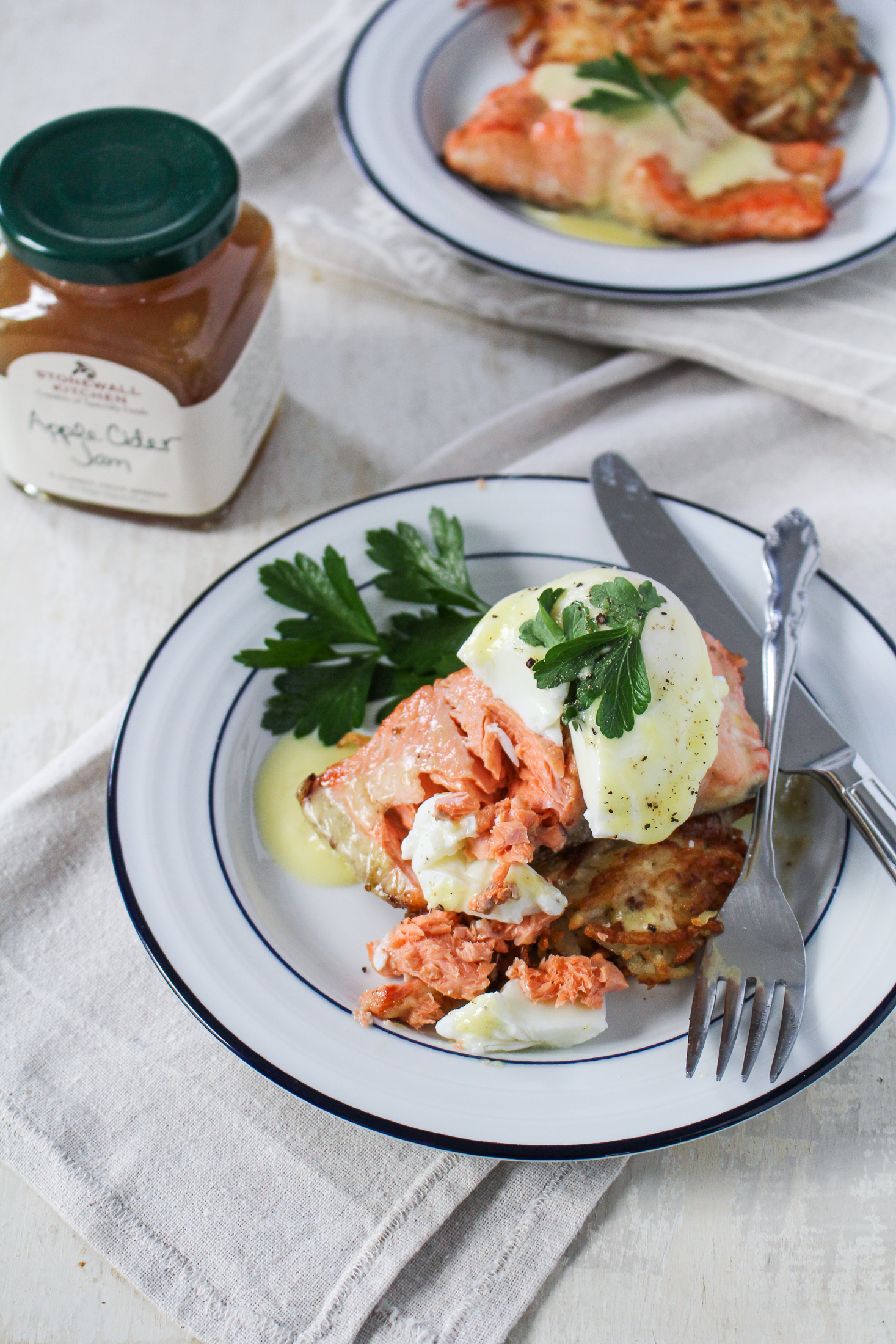 The Apple Cider Jam is thick and sweet and heavily spiced with holiday spices (I’m not sure precisely what’s in it – trade secret? – but think along the lines of cinnamon, nutmeg, ginger, etc.). Having a spoonful is like eating apple pie filling but concentrated down into one delicious bite. That said, it needs a little bit of tempering for use in a savory context, so for this recipe I mixed it with apple cider vinegar, mustard, olive oil, and salt and pepper for a sweet-and-tangy glaze. We brushed the glaze on wild salmon, which we then broiled until just cooked through, and served on top of potato-apple latkes with a poached egg and hollandaise for a fancy-pants version of eggs benedict. It was incredible – crunchy fried potato latkes, rich sweet-and-tangy salmon, soft and runny eggs (although I’ll admit I overcooked them slightly – it was my first time poaching an egg, if you can believe that!), and of course, buttery hollandaise sauce. So much flavor and texture and deliciousness in every bite. 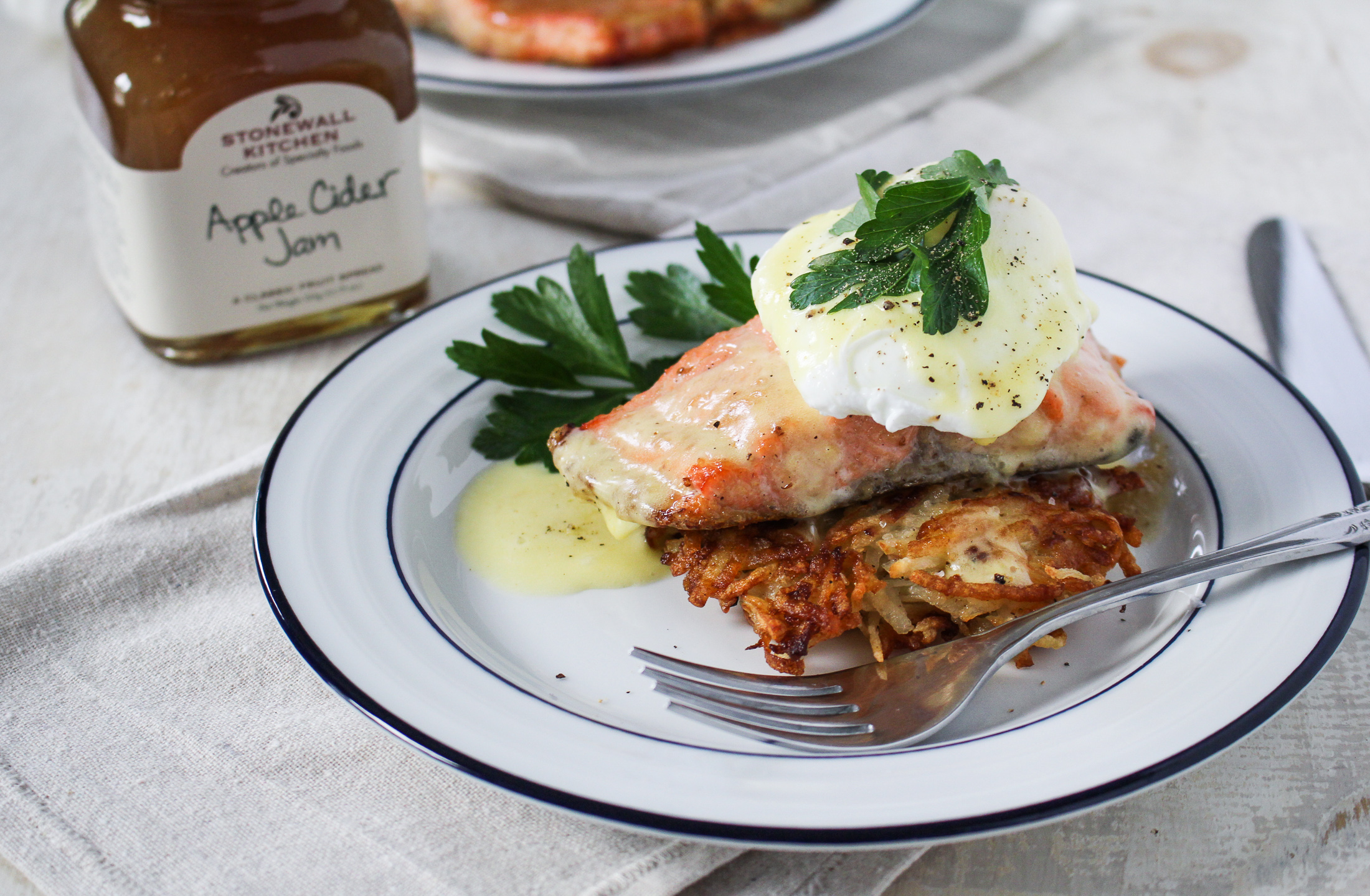 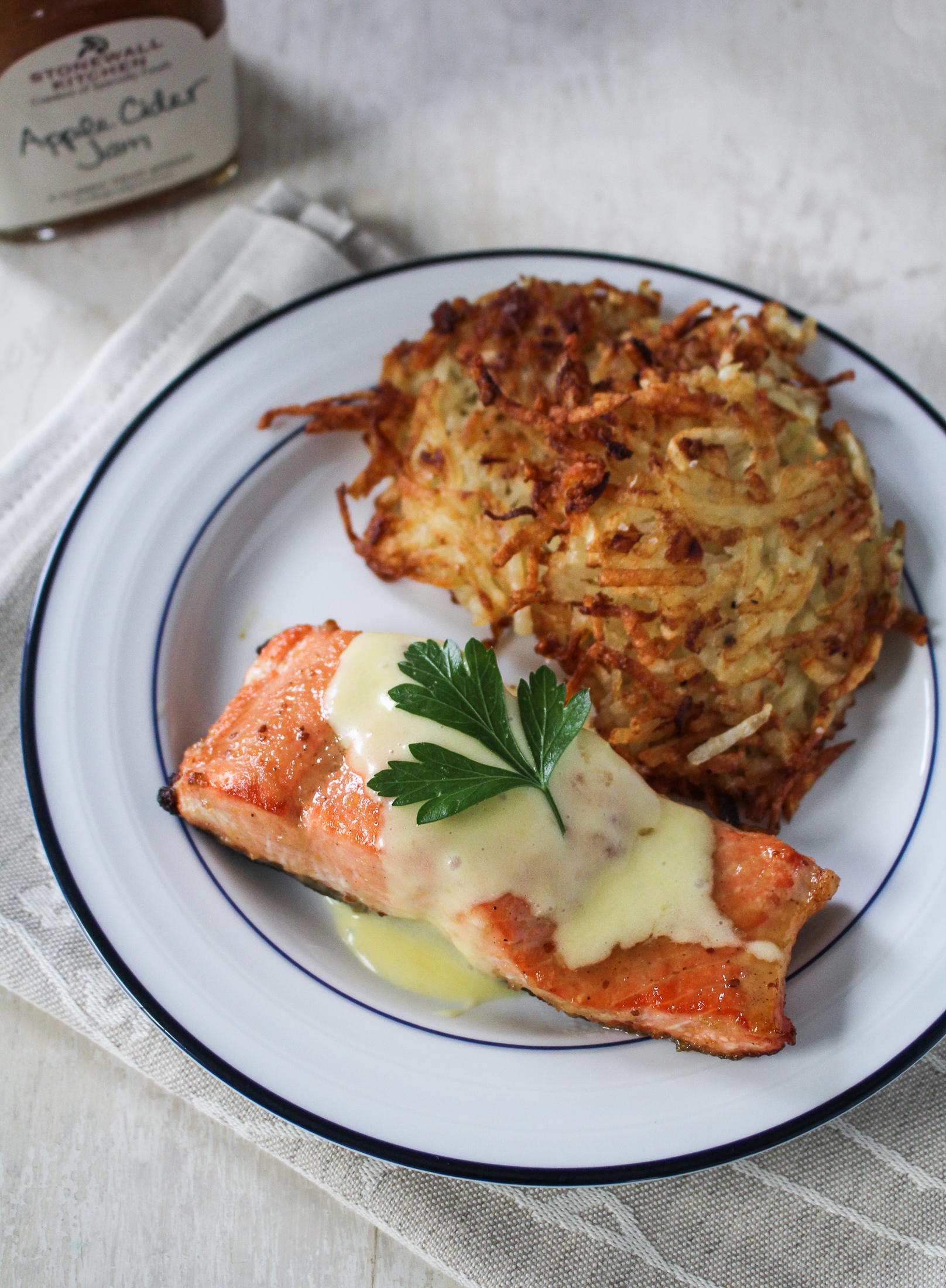 Now, I want to take a minute here to say that I get that making cider-jam-glazed salmon and latkes and poached eggs and hollandaise sauce is a time commitment. This is definitely a weekend luxury meal. But the salmon by itself is incredibly quick to prepare – it probably takes 10 minutes from start to finish – and would be a great weeknight dinner with any number of side dishes. So keep that in mind before you write this recipe off as too complicated! And when you do have an hour on a lazy Sunday morning, make the whole thing. I promise you, it will not be a wasted hour.

Disclosure: This post is sponsored by Stonewall Kitchen, but all opinions are honest and my own as usual. 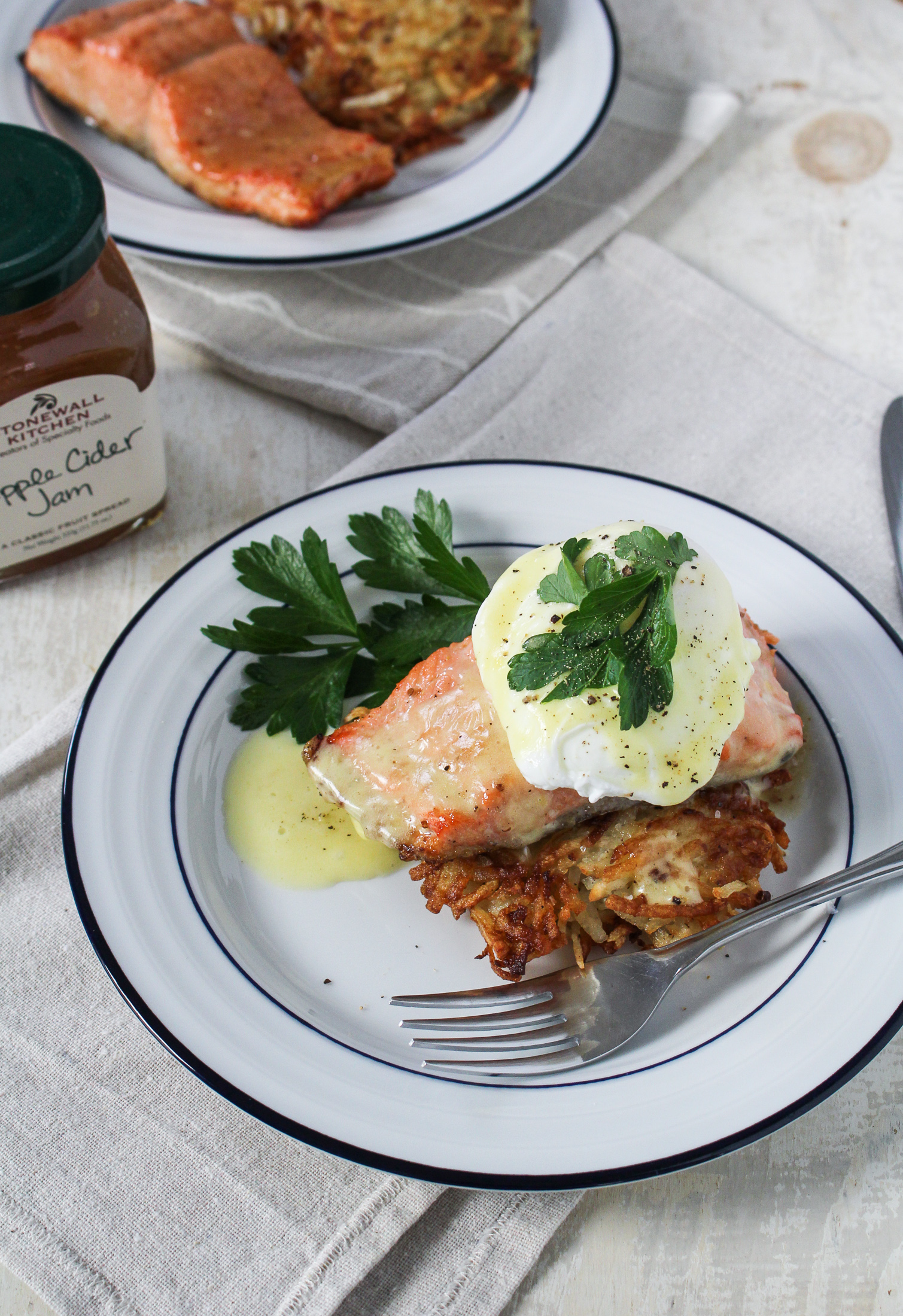