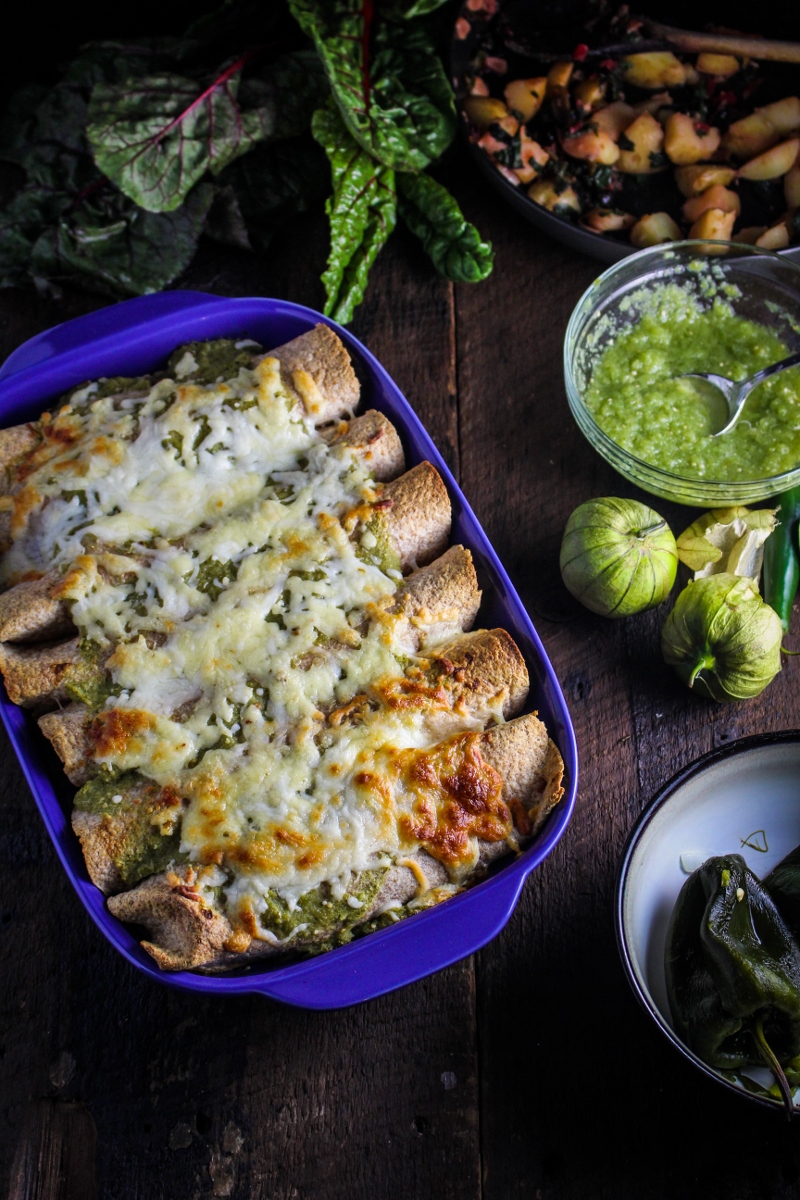 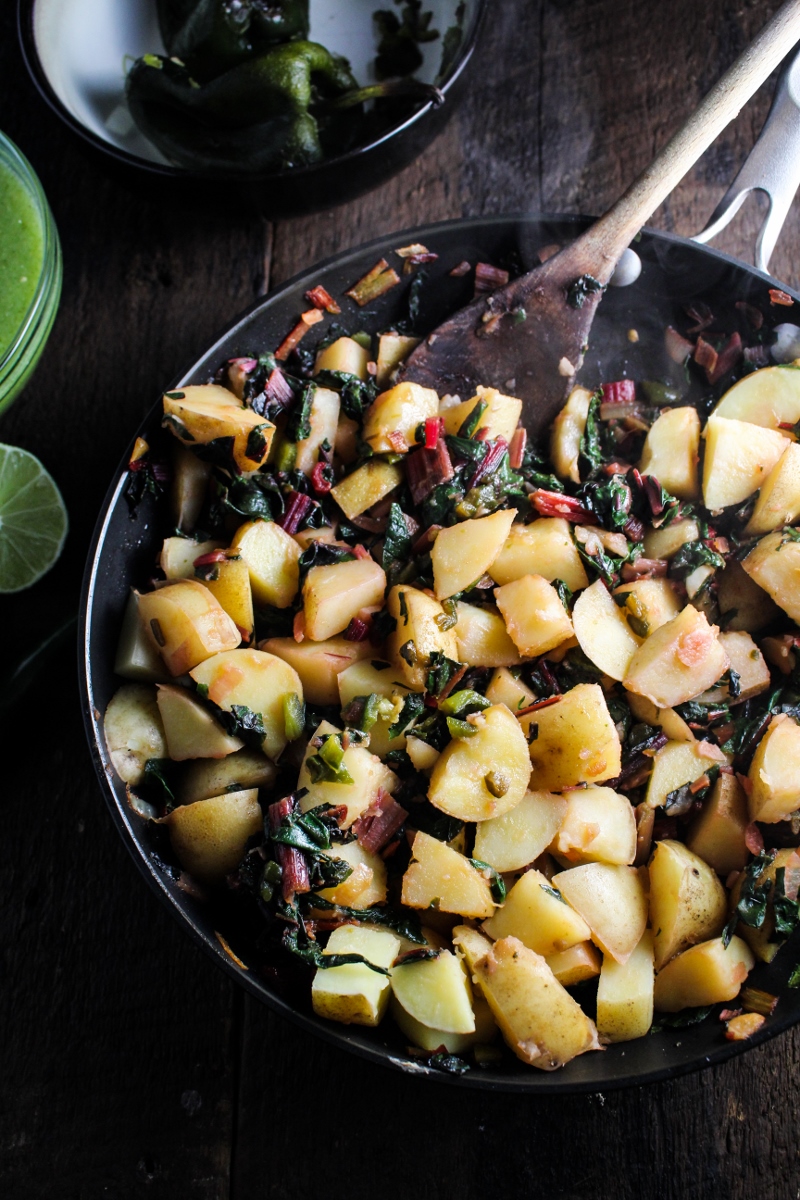 It was nice to take August off from holding myself to, well, much of anything. I needed the break. Of course, I was still working, and work was actually quite hectic – the main reason for needing to let everything else slide a little. But things have slowed down, and I’m finally feeling caught up on all the other aspects of my life. A part of that, of course, is getting back into a healthy daily routine, and that means the monthly fitness goals are back on.

I’ve known that speed would be the focus of my September goal since July, really. Since I started running again in January (after the longest hiatus I’ve probably ever taken last fall), I’ve been pretty diligent about getting out there. Starting back up again is the worst part of running, so once I’ve got a little endurance I like to hang on to it. So far this year I’ve run over 300 miles, and from January through June I was getting faster every month, moving from an average pace of 9’22” in January all the way down to an 8’04” in June. But July and August were full of hot, slow slogs, so I promised myself that once the weather cooled down, I’d focus on getting my pace back up. I set a goal of getting down under an average pace of 8’10” again, and although the first few runs of the month were a struggle, my last three were all sub 8′, and my current average is exactly 8’10”. But that doesn’t mean I’m done! I’ve run 20 miles this month and I’d like to get in at least 20 miles more, maybe even getting down to my stretch goal of 7’59”. We’ll see. For now I’m just glad to feel a little faster and lighter (not to mention cooler!) out on the road. 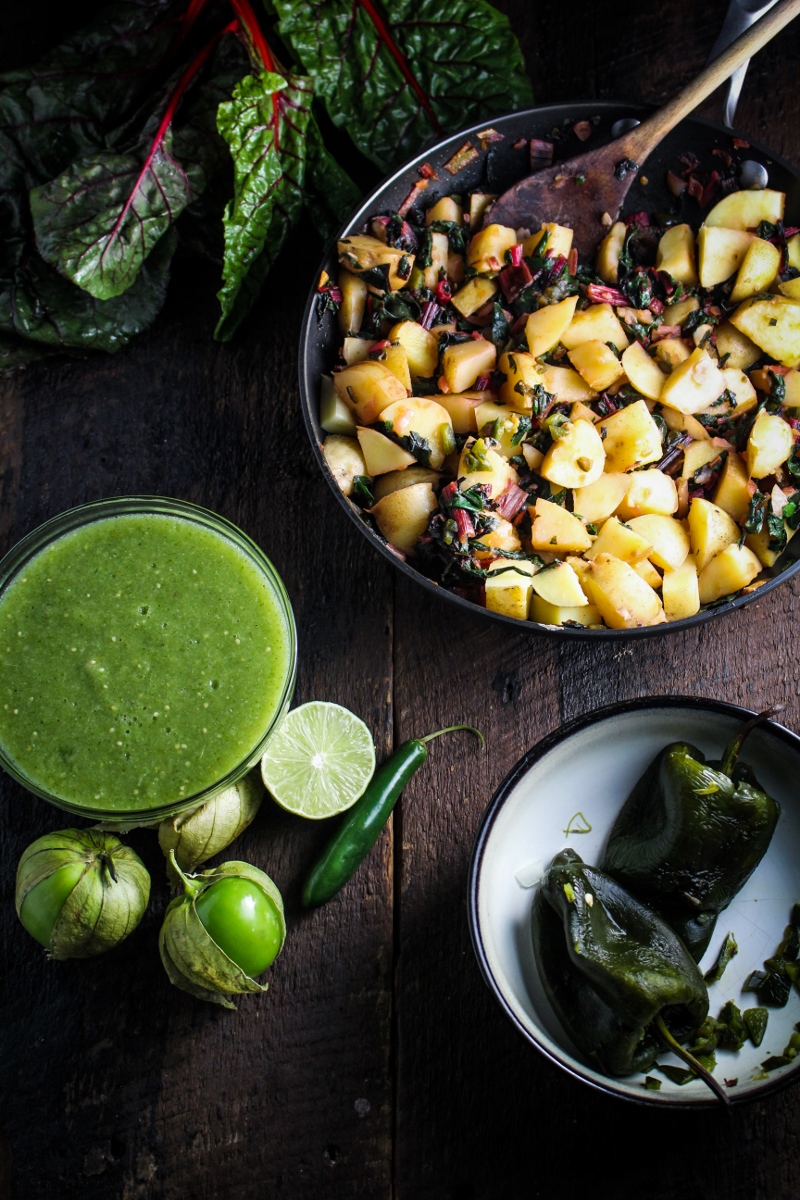 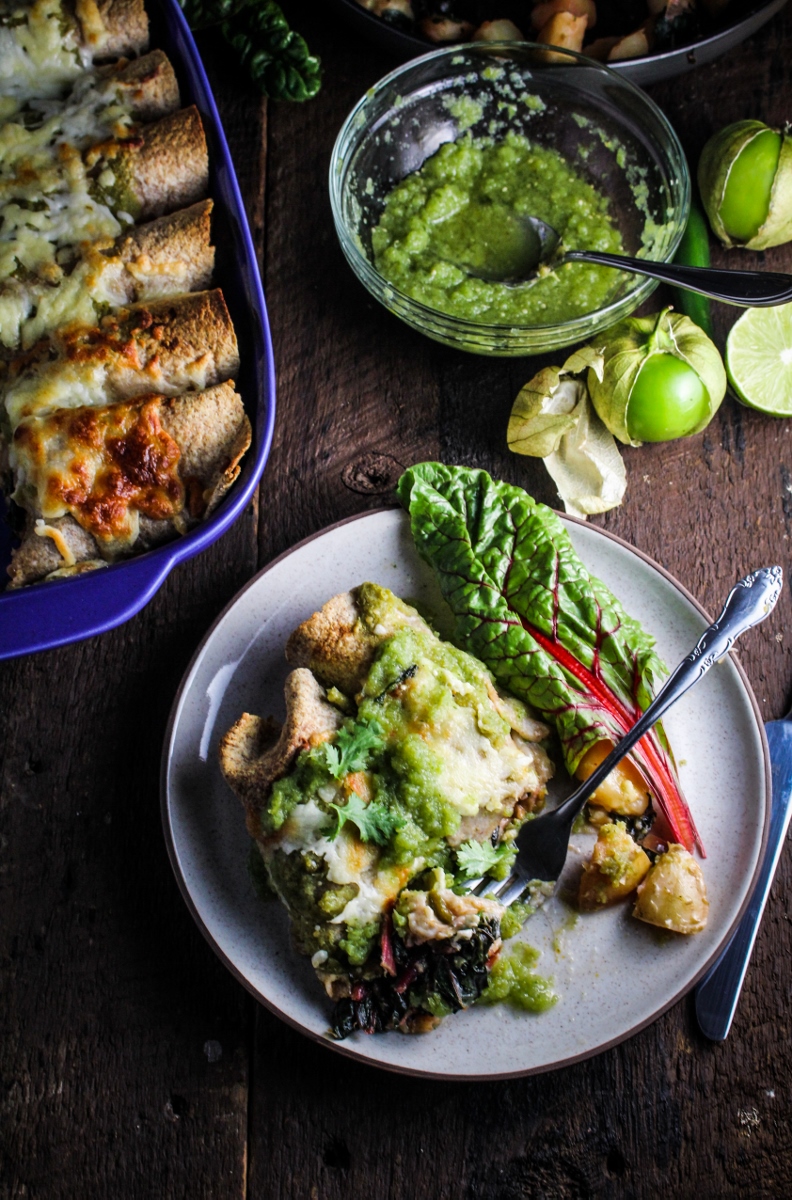 On a different note, let’s talk about these enchiladas. On our way home from Maine after Labor Day we stopped in at a little restaurant in Belfast called Chase’s Daily. It’s an airy space, and in the back they sell the most gorgeous local vegetables and flowers. Belfast is a small town, but the line to buy fresh produce snaked all the way down the counter. We sat down for a late breakfast, and although Trevor looked somewhat crestfallen when I told him it was a vegetarian restaurant, we both very much enjoyed our meals. I ordered the potato and roasted poblano enchiladas, which were smothered in the tangiest salsa verde, and liked them so much I knew I wanted to recreate them at home ASAP. Since they use lots of vegetables and we’re moving into that time of year where we all need to figure out how to make warm, comforting food be good for you, I thought they would do nicely for this month’s healthy recipe.

As I researched salsa verde recipes I saw two basic variations, one using raw tomatillos and the other using roasted tomatillos. Beyond that, and perhaps the ratio of chiles to tomatillos to cilantro, most of the recipes were nearly identical. As I thought about how to make this recipe my own, I decided that with equal numbers of recipes for raw salsa verde and roasted salsa verde, they must both be good – why not build in an extra layer of flavor and make a raw and roasted version? That was a good starting point, and yielded a salsa verde that was both tangy and a little sweet. For the enchilada filling, I grabbed a few potatoes out of the large bag we harvested last week and boiled them, then cooked them briefly with garlic, swiss chard, and diced roasted poblano. The potato-poblano filling gets rolled up in tortillas, smothered with salsa verde, and sprinkled with grated pepper jack, before a brief stint in the oven that yields crispy tortilla edges, golden-brown cheese, and steaming hot filling. I ate way too much of this in one sitting, but managed to save a little bit of leftovers (that I’m very much looking forward to for lunch tomorrow). It’s perfect on a chilly night – warm and filling but full of veggies!

I hope all of your Septembers are off to an equally healthy and productive start. It’s a good time of year to take stock, get organized and energized and charge into a new season. 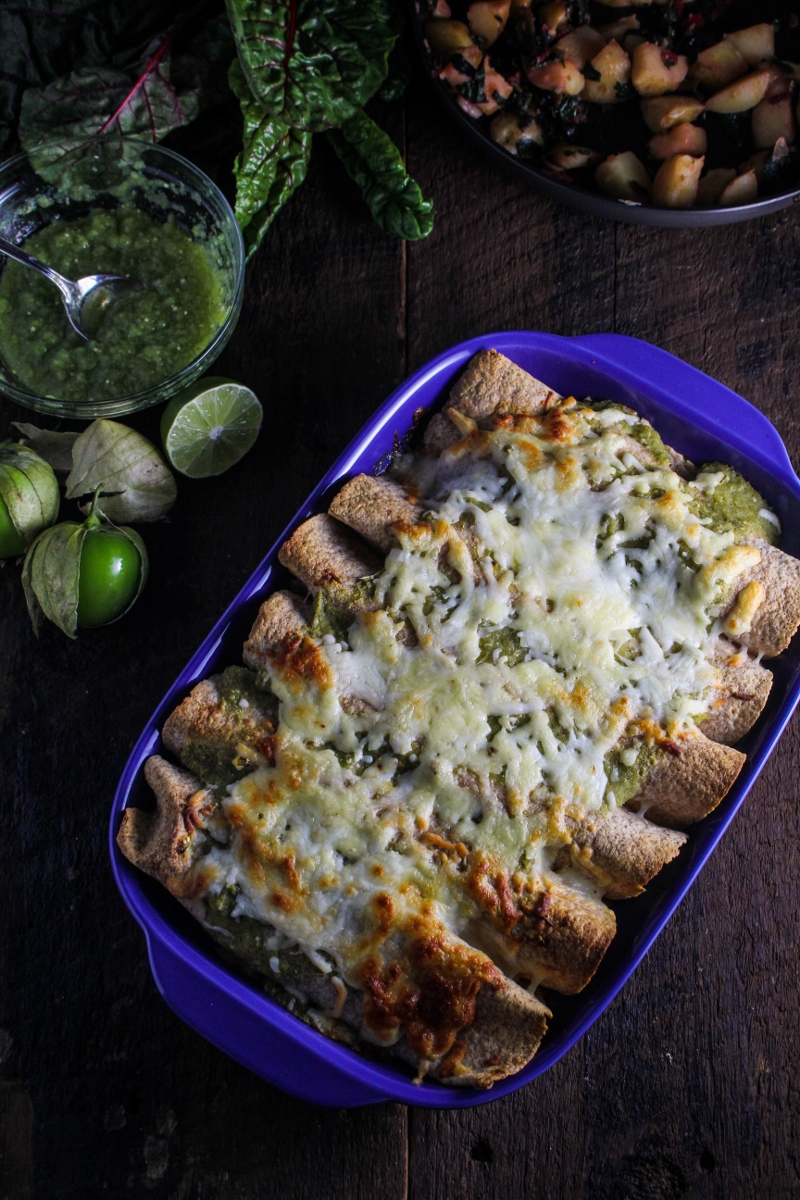 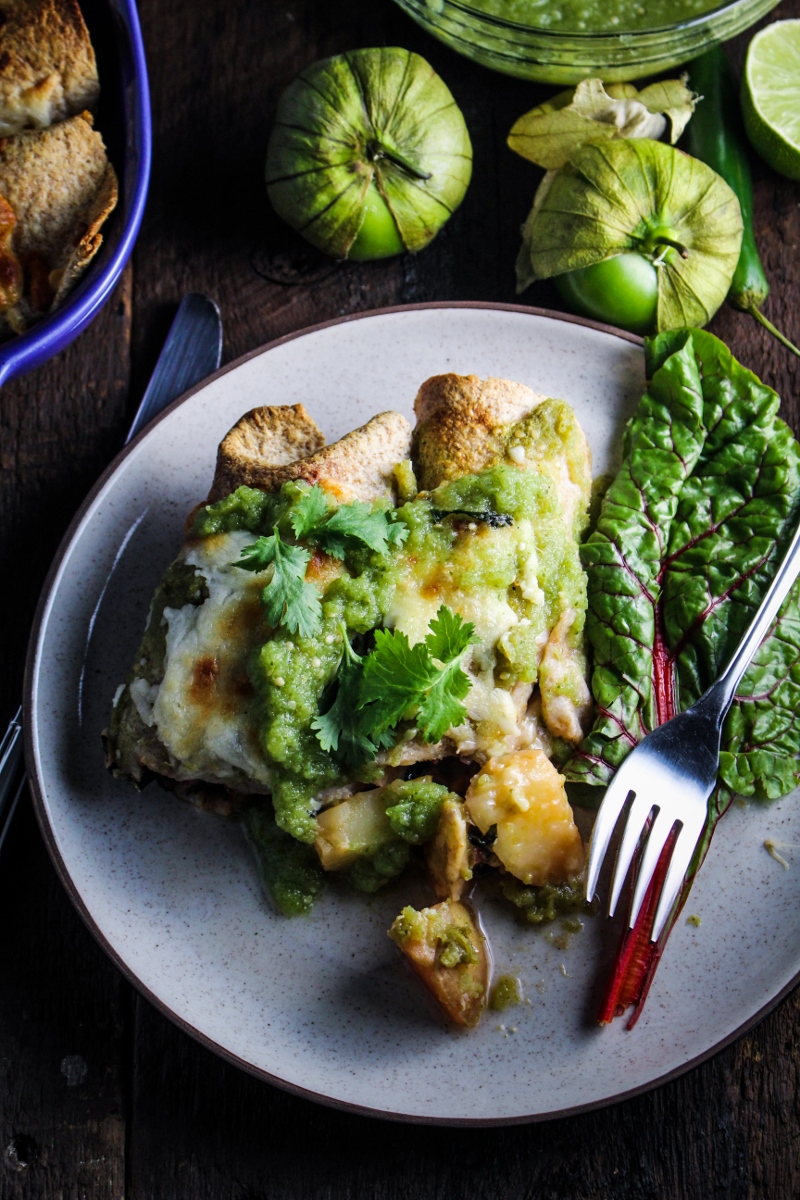 Inspired by breakfast at Chase’s Daily in Belfast, ME. Serves 4-5. 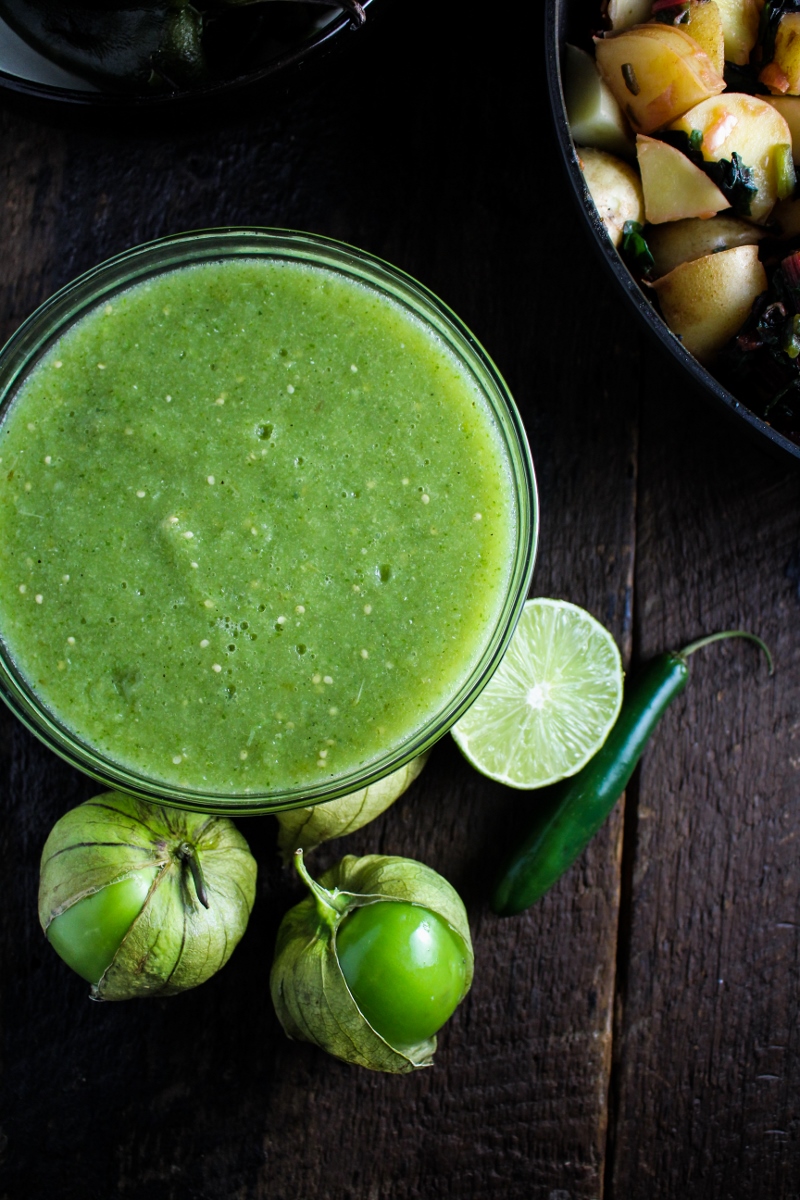