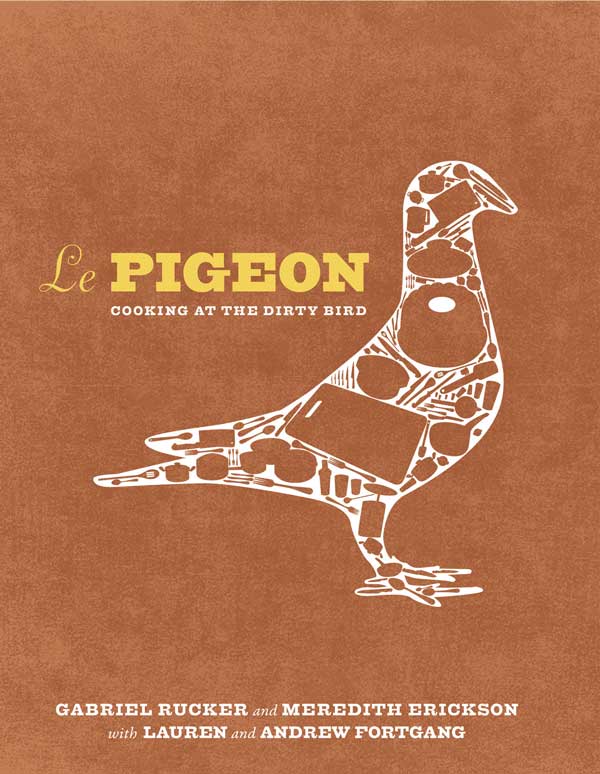 The Book: There have been a lot of big-name chef and restaurant cookbooks published this fall. I find that restaurant cookbooks can be hit or miss – not all delicious restaurant food translates well to home kitchens, and sometimes scaling restaurant quantities down results in more recipe errors. However, I took a chance on one of this season’s restaurant books, Le Pigeon, since I couldn’t get over the intriguing table of contents (tongue, fat liver, little birds, pork, horns and antlers, lamb, etc.). I’m glad I did – this book is a winner. While it’s not for vegetarians or timid cooks, adventurous eaters will find dozens of recipes that stretch the way they think about food – this is outside-of-the-box cooking. Every dish is creative and company-worthy, but there’s a broad range of accessibility: a newer cook might try the simple radicchio and pear salad with an addictive-sounding blue cheese dressing or the slow-roasted lamb served over risotto (featured here!). On the other end of the spectrum, even the most ambitious chef will probably be challenged by the 7-component banana cream pie with pineapple and macadamia nuts, or the 5-component calf’s head terrine with gribiche, sweetbreads, and bruleed eggs. Some of the recipes go a little too far for my taste – I get a little squeamish about offal and other infrequently used meats, so recipes like eel dumplings and foie gras served in eel consomme are not something I’m going to cook – but for some people these unique recipes could be the highlight of the book. One note of warning: as you might have gleaned already, some of the ingredients used in this book will be really hard for the average joe to find, especially given seasonality. The book itself is one of the heftier ones on my shelves, with over 340 pages, and plenty of big, full-page photos – of the food, the city, customers, and the chefs just goofing around. I’ve never been to Portland (the Oregon one) or eaten at Le Pigeon, but my gut tells me that this book, full of stories, notes from the chef, and lots of meat and offal, is true to the experience you might have at the restaurant. 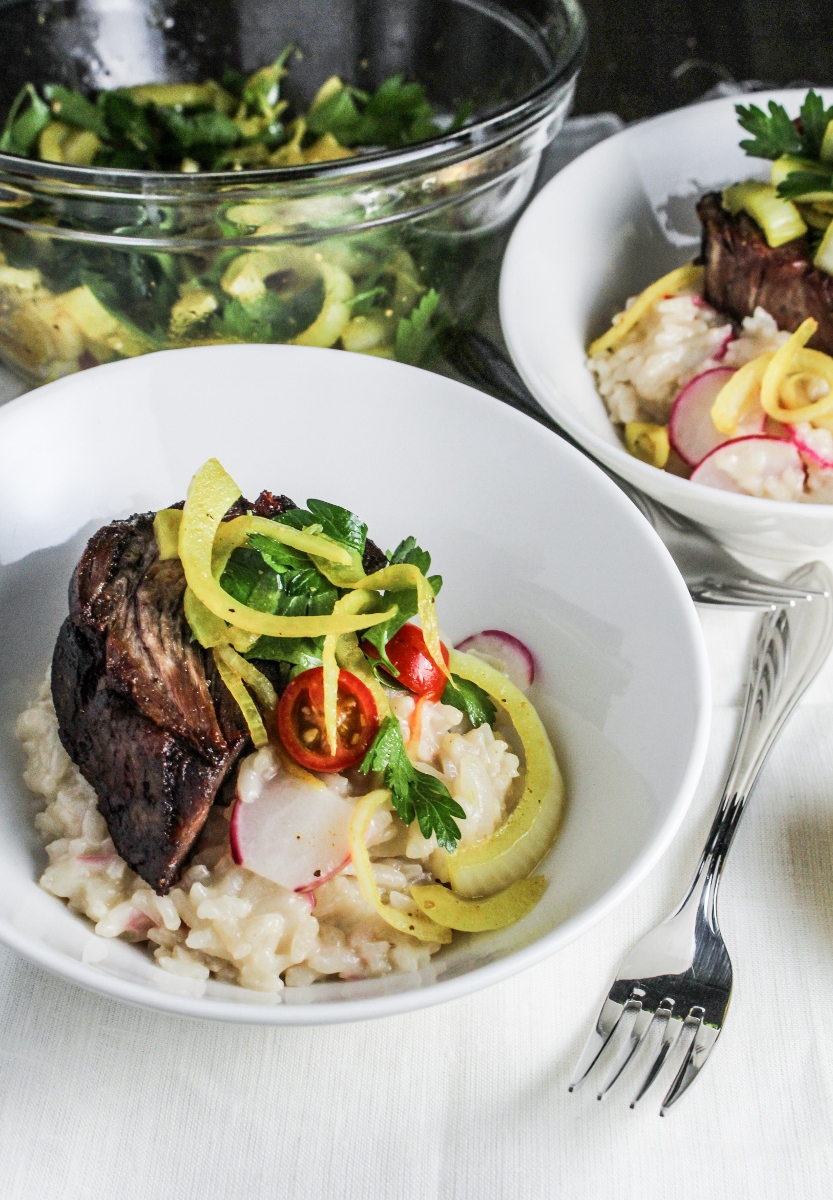 The Food: There were only a handful of recipes from Le Pigeon that were approved to be shared for promotional purposes, but they all sounded delicious. We were initially going to make the Maple-Lacquered Squab with Duck Confit Hash, but squab proved very difficult to find (actually, we bought cornish game hens as a potential substitute, but it turns out that they are not game at all, they’re just tiny, expensive chickens). So we pushed this review back a week and took the time to roast the 5-hour lamb for the Lamb with Green Garlic Risotto. The name of this dish does not do it justice – it’s incredible. Although relatively simple to put together, the three components of this dish – a lamb shoulder that’s roasted until falling apart, sliced, then quickly pan-fried before serving; a creamy pecorino and radish risotto; and a mind-blowing curry-pickled fennel and parsley salad – come together in an amazing burst of flavor. The lamb is intensely gamey, the risotto rich and cheesy, and the fennel bright and crunchy and exotic. I couldn’t get enough of the fennel, until I took a few bites without risotto and realized that it was the combination of the two that I was liking so much. Really, a showstopper. If you plan ahead and roast the lamb the night before, this is actually easy enough for a weeknight dinner. It is one of the simpler recipes in the book, so I hope we find the other recipes have the same great time to flavor payoff. Scroll down for the recipe. 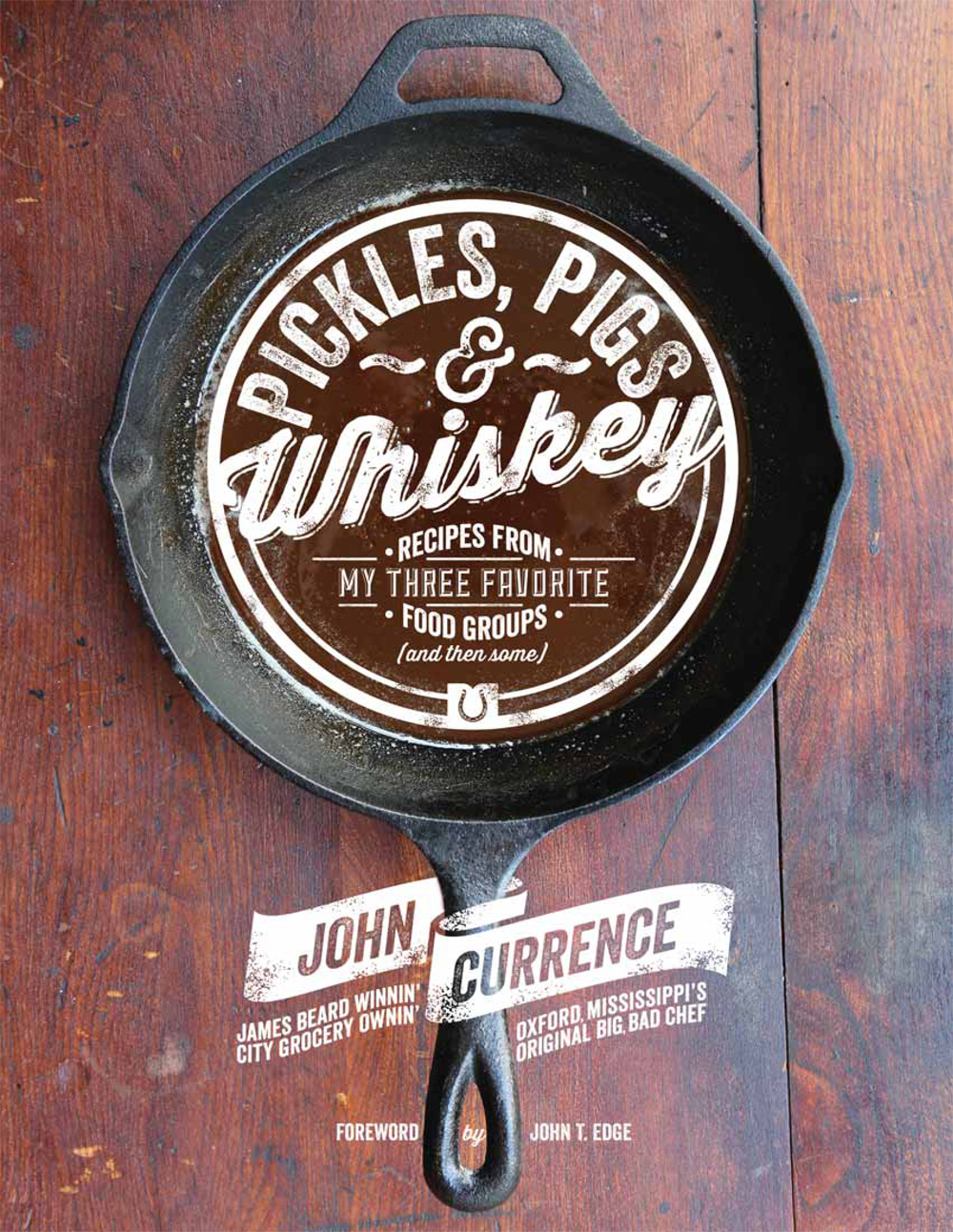 The Book: Pickles, Pigs & Whiskey is a different sort of cookbook. With the strongly-felt influence of its chef-author, John Currence of City Grocery, it meanders through the foods that have influenced his culinary journey. You will find more than just dinner and dessert here, with whole chapters dedicated to condiments, canning, cocktails, and meat curing. Mostly rooted in Southern cooking (deep Southern and Creole cooking to be more specific), it occasionally veers into the culinary traditions of Latin America, Italy, and France. Between the different cooking techniques and different regional influences, all together this book is a bit of a hodge podge, but in a good way. It has personality. Most of the recipes manage to be both fancy and rustic at the same time – comforting stews and roasts and braises, but always with an elegant spin. Like Le Pigeon, many of these dishes are fairly meat-heavy – again, probably not the best choice for vegetarians or for those trying to eat lightly, but great for creating intense flavors. I’m not the biggest fan of the design of the book – the multiple photo layouts are a little bit too yearbook-like for me – but that’s obviously a matter of personal taste. What I do like is the inclusion of music to listen to while you’re cooking each dish; I think it’s such a fun and original idea to include playlists in a cookbook. 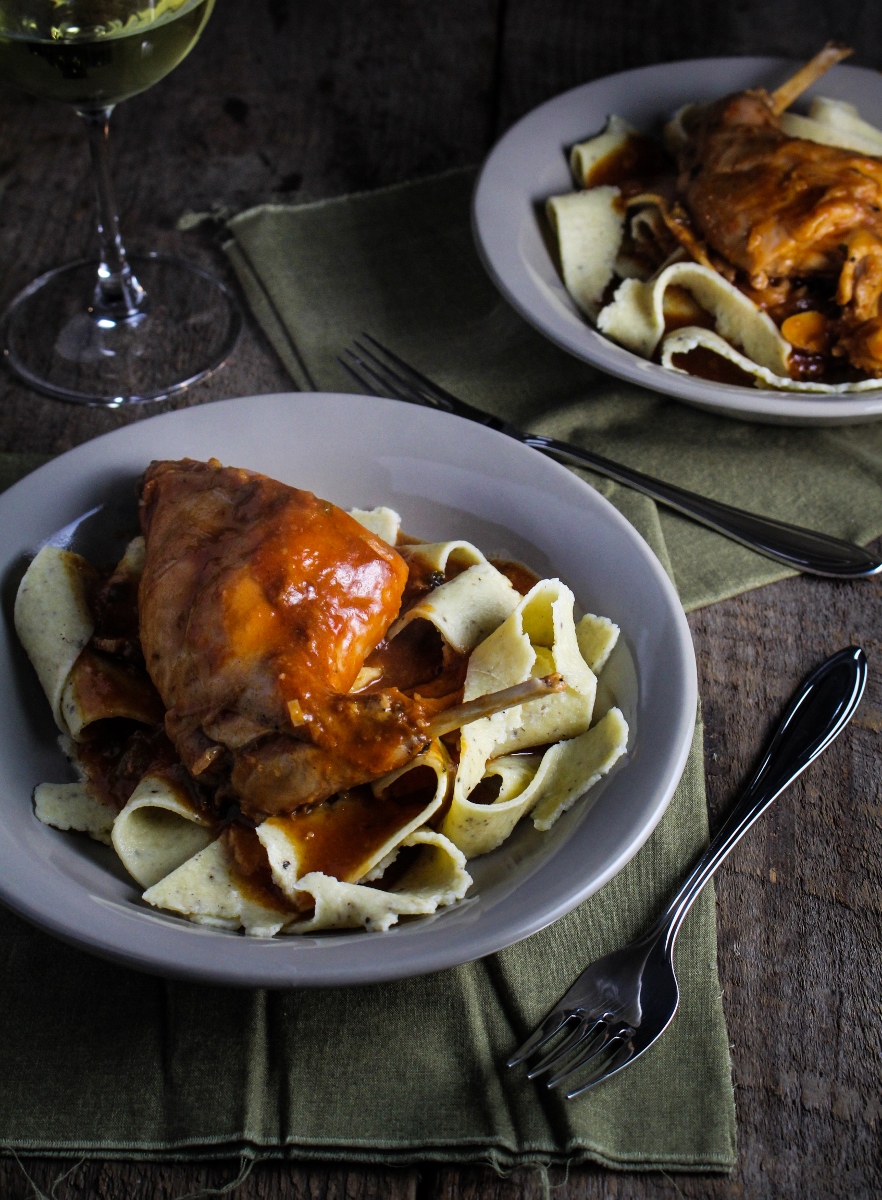 The Food: Perhaps we were being foolish, but the recipes we chose to test from this book didn’t contain any of the three title ingredients. In fact, they aren’t even that Southern, but Rabbit Cacciatore with Black Pepper Pappardelle was what sounded good to us on a freezing November night, so that’s what we made. I’m a big fan of rabbit, but I thought this recipe didn’t really showcase it – it actually ended up tasting kind of like chicken, where chicken was the protein it was intended to replace. Plus, it was a bit tricky to eat with the rabbit pieces left whole; next time, I would pull the rabbit meat off the bones before serving. The mushroom and tomato sauce was good, a little one dimensional perhaps, but with an unexpected smoky kick to it that I liked, and it had gained complexity by lunchtime the next day. I can’t really fairly review the pappardelle, since I accidentally used bread flour, thought I didn’t have enough, and added some semolina flour to make up for it – but it did end up coming out really well after some thorough kneading, and I loved the black pepper bite to it. All told, this was a solid recipe, but not particularly special, especially given the price of rabbit. I’m certainly not giving up on the book, but next time I think I’ll choose something a bit more Southern. Scroll down for the recipe. 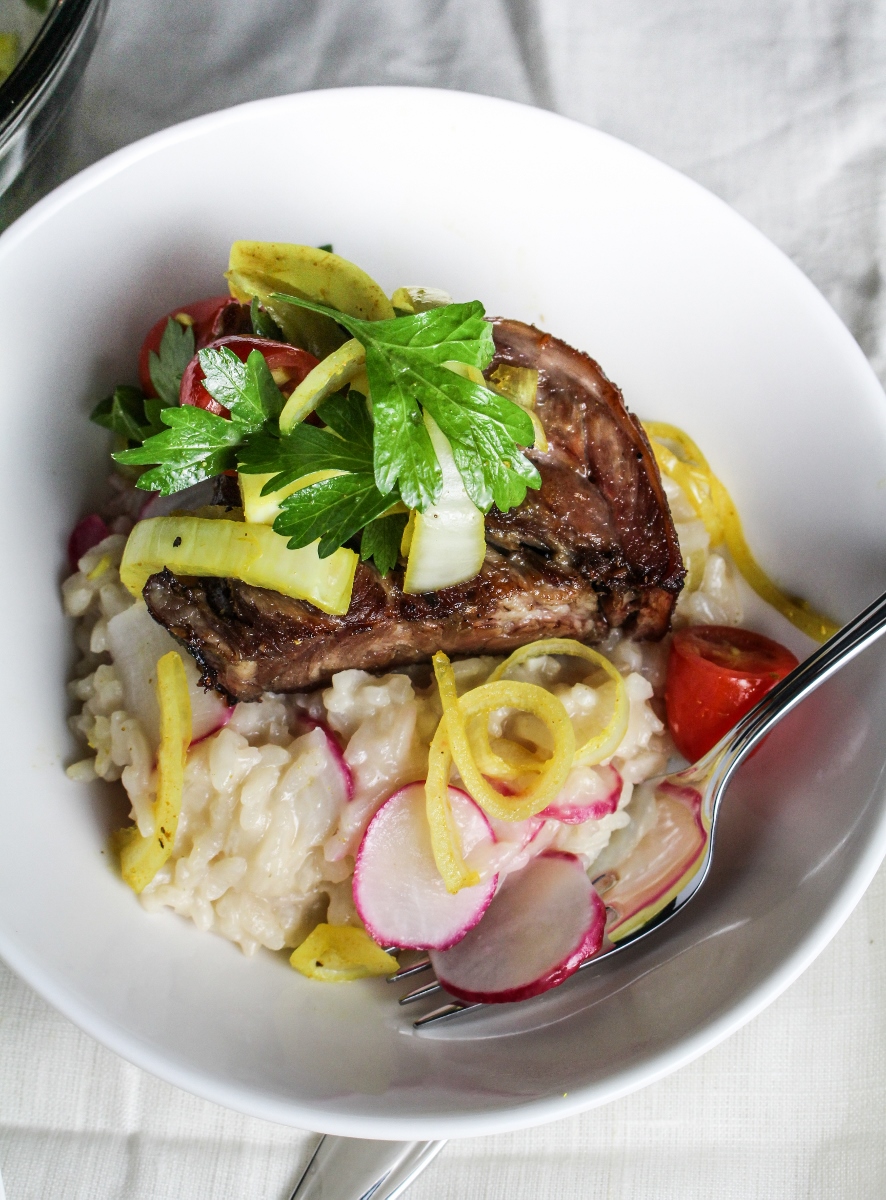 For the pickled fennel salad: 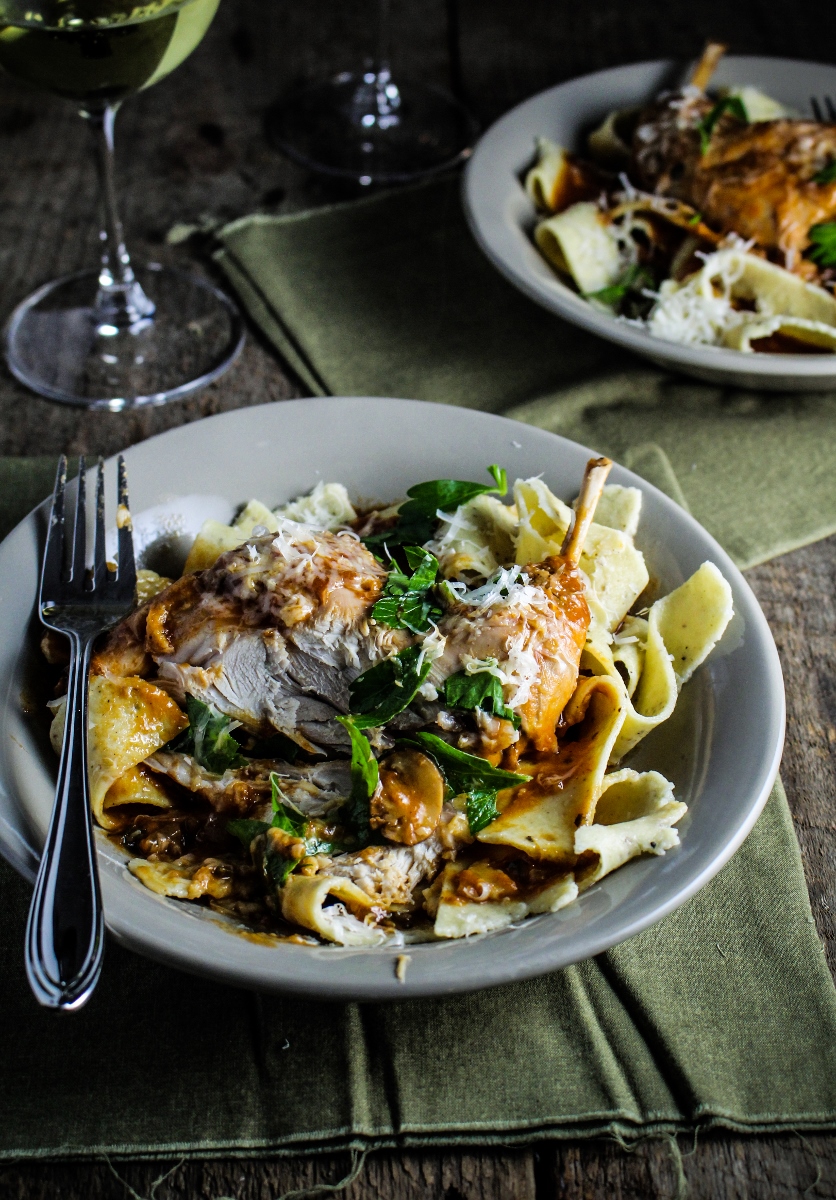 Disclaimer: I received a review copy of both these cookbooks from Ten Speed Press and Andrews McMeel free of charge, but was not otherwise compensated for writing this review.