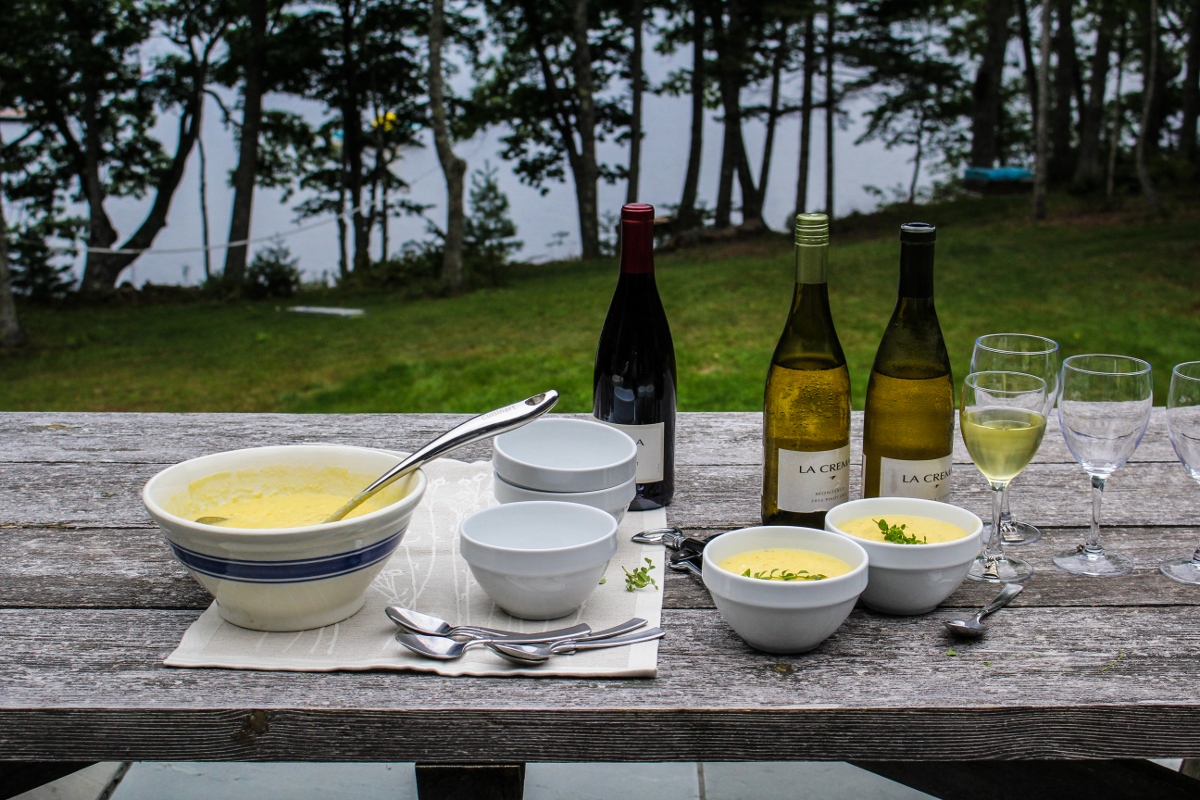 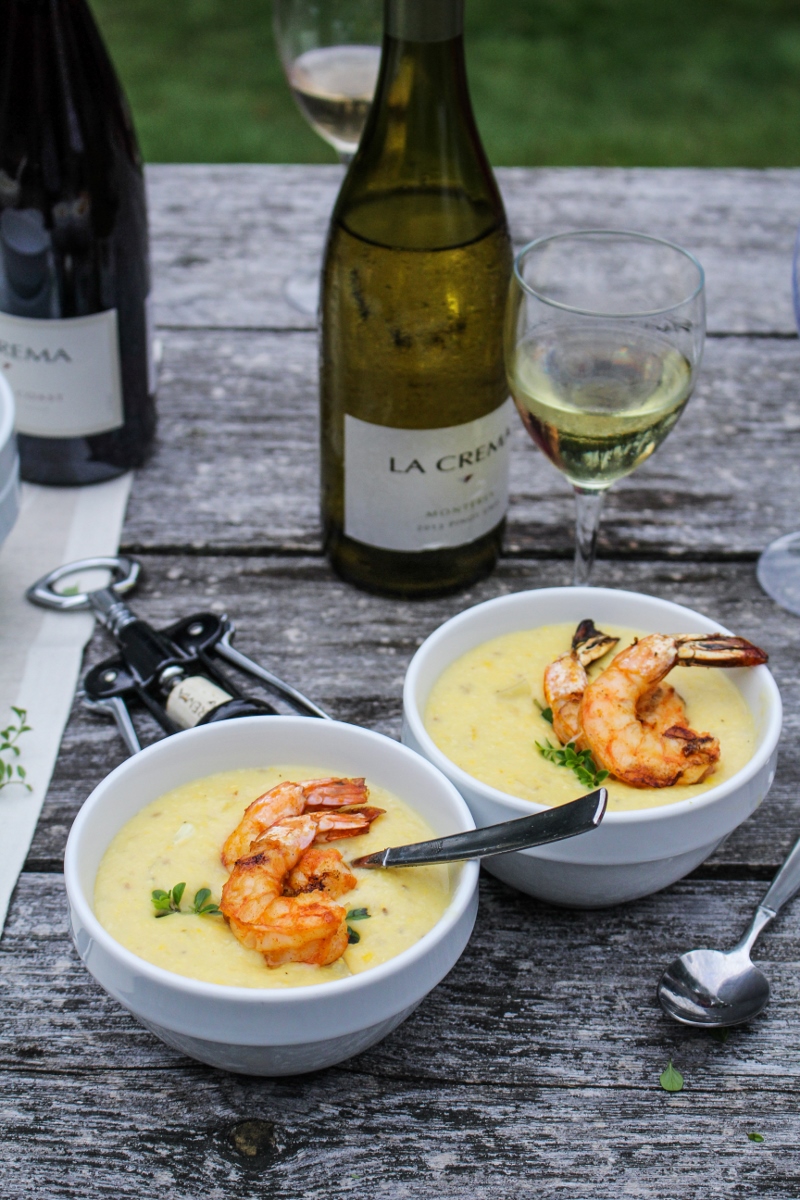 We hosted our second wine dinner last weekend, this time with three lovely, very drinkable wines provided by La Crema Winery in California. It’s hard to believe that our first wine dinner was way back in February – I had originally planned to do them more frequently, but it’s actually very tricky to get wine shipped to Massachusetts. Starting in January, the legislation will loosen up – maybe then we can do more of these dinners – but until then, having the wine shipped to my family’s place in Maine is the best option. The hidden benefit of this is having a built-in guest list composed of people who love to drink wine: my family. So Trevor and I headed North for Labor Day weekend for one last summer visit during which we could cook some good food and drink some good wine. 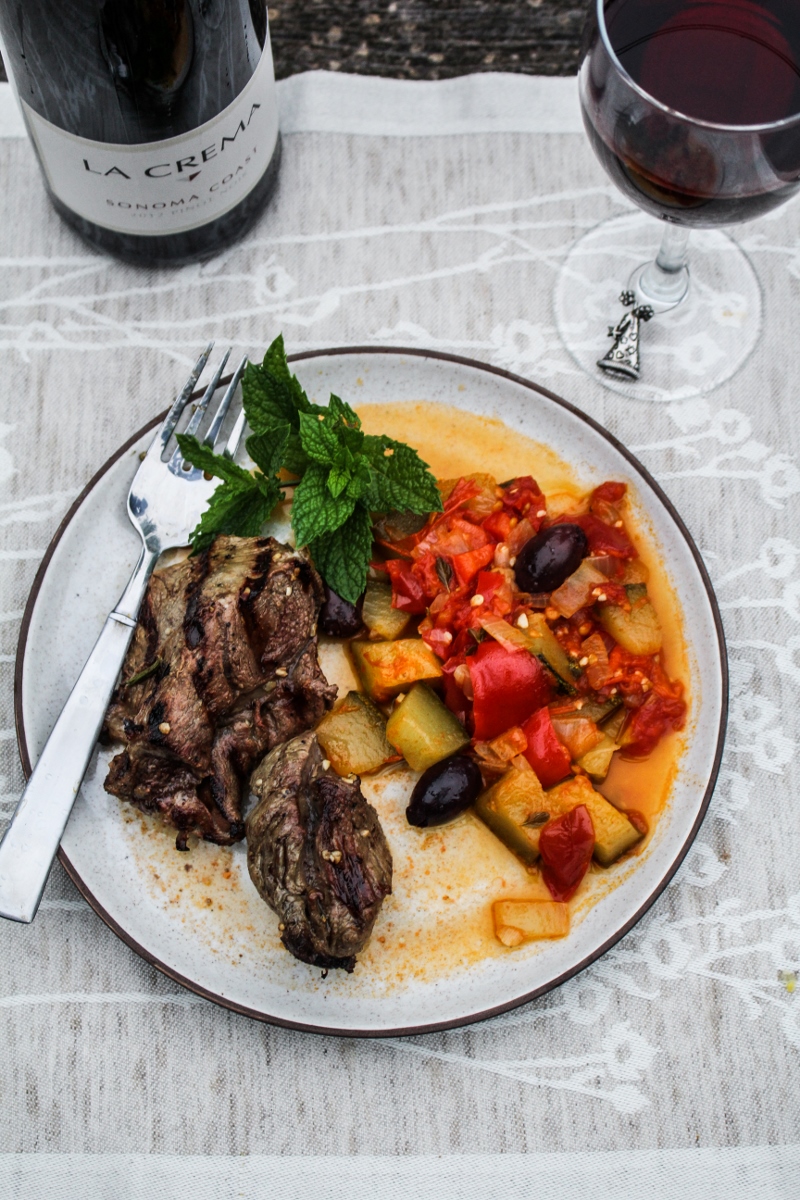 The team at La Crema was kind enough to send us three bottles of wine for this dinner – a Chardonnay, a Pinot Noir, and a Pinot Gris. All three bottles retail in the $20-25 range, and are solid, straightforward table wines. None of them left a particularly lasting impression but all were easy to drink and true to their type, and no one turned down a second glass of any of the three varietals. Since all three wines were relatively light-bodied and good for patio-drinking, we designed a menu with an “end-of-summer in California” vibe to complement the wines and the season, and call to mind the wines’ terroir. Most of the menu was done on the grill, and it featured plenty of end-of-summer produce, but the dishes were a little heartier than mid-summer fare and everything was served warm. We started with a corn chowder topped with paprika-grilled shrimp, the main was a grilled leg of lamb with ratatouille, and the dessert was rosemary pear bars served with whipped cream. I was very happy with how all three dishes turned out – the product of days of brainstorming – and even happier with how quick the whole thing was to throw together. I don’t think I’ve ever served a meal that was such a snap to cook with such stellar results. Of course, I have to give a big heap of the credit to Trevor (and to my other sous-chef, Aunt Robin!) as both the shrimp and the lamp were perfectly grilled, a skill I certainly don’t have in my repertoire. 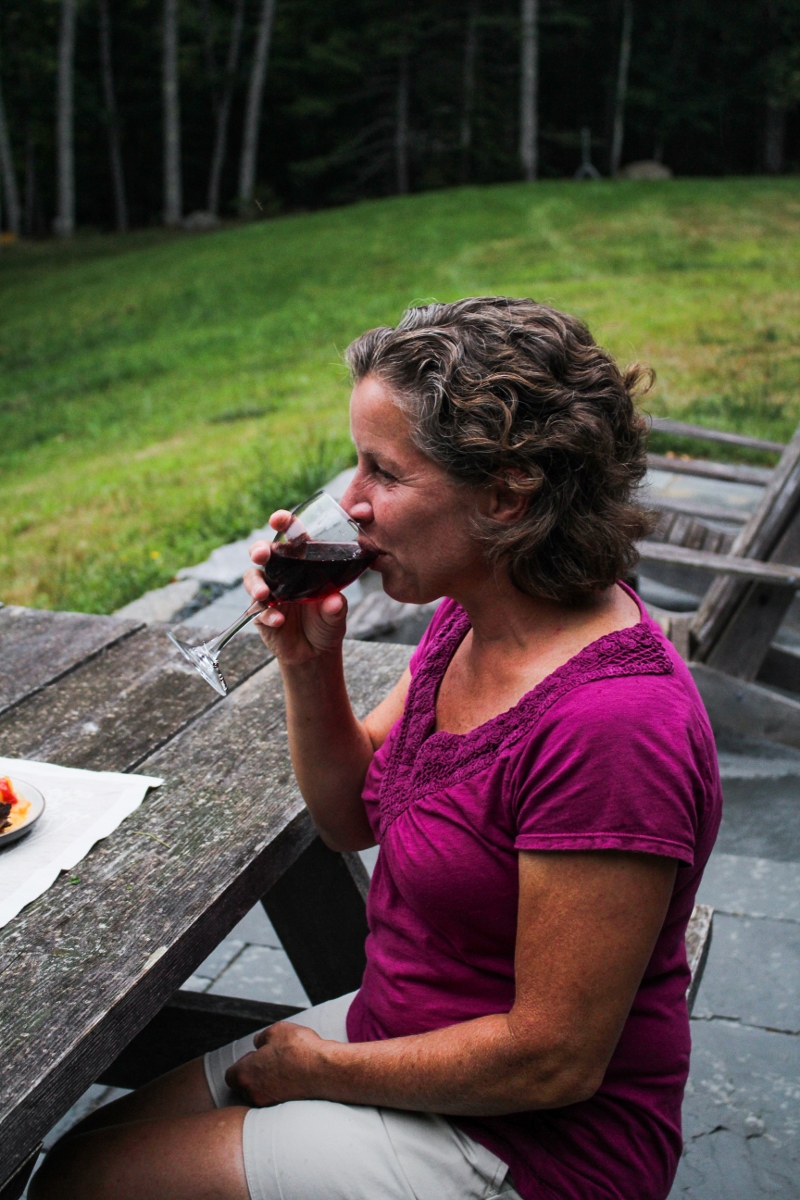 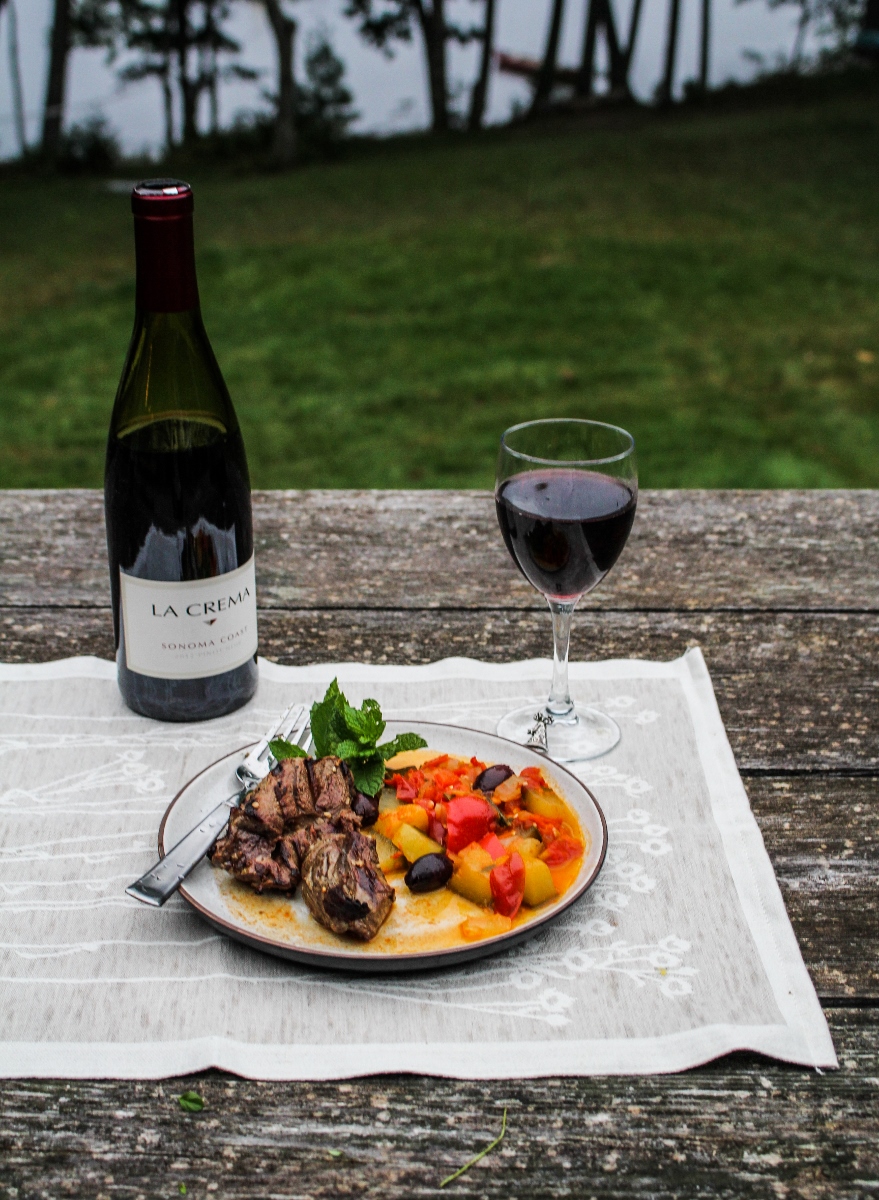 I knew ahead of time that the forecast was not good for Sunday, our planned dinner day, but the clouds cleared out early in the day and we ended up with plenty of sun all afternoon. Sadly, as dinnertime approached, the clouds rolled back in and I found myself racing to get the picnic table set before the rain began. Just as I ladled the chowder into bowls the first drops began to fall, so I snapped as many pictures as I could and we shuffled everything back inside. Although I’ll admit I was disappointed not to have the beautiful outdoor evening I had been imagining, the food and wine were perfect and the night still ended with tequila shots, a giant bag of peanut M&Ms, and my mom and Aunt Robin dancing in the rain – any night that ends that way is a success in my books. 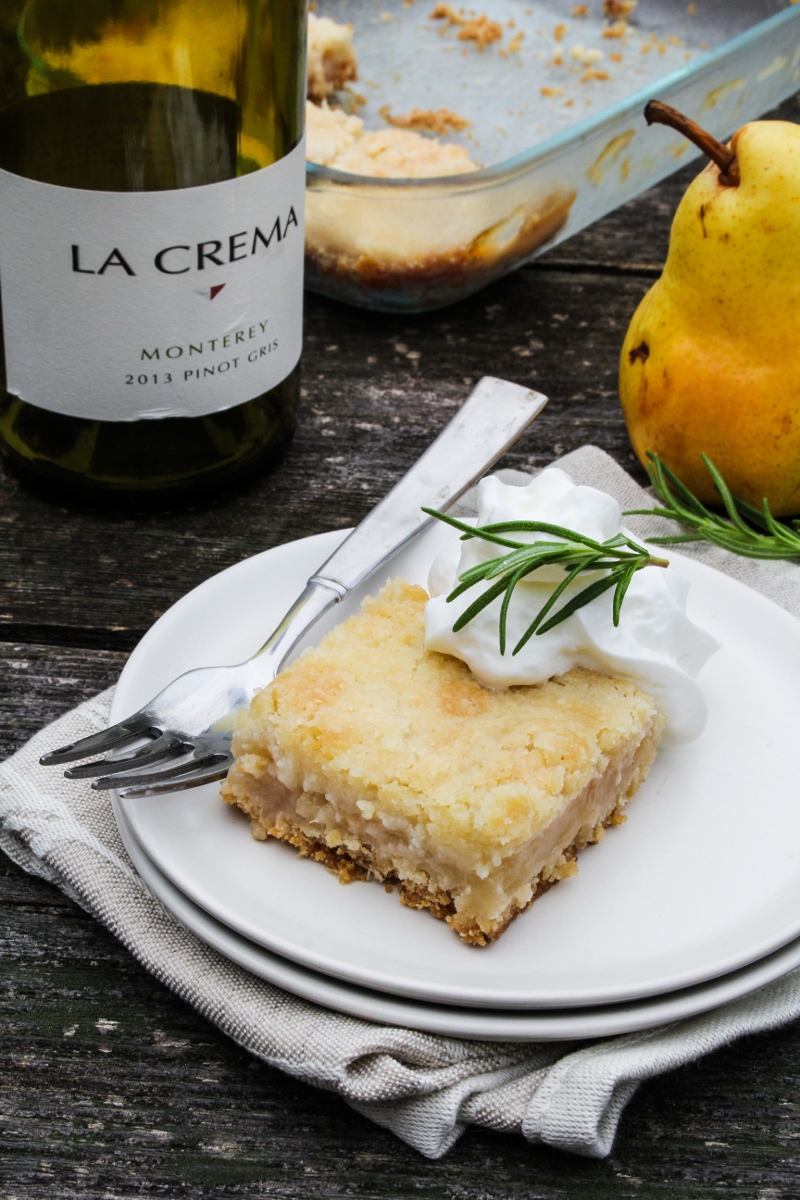 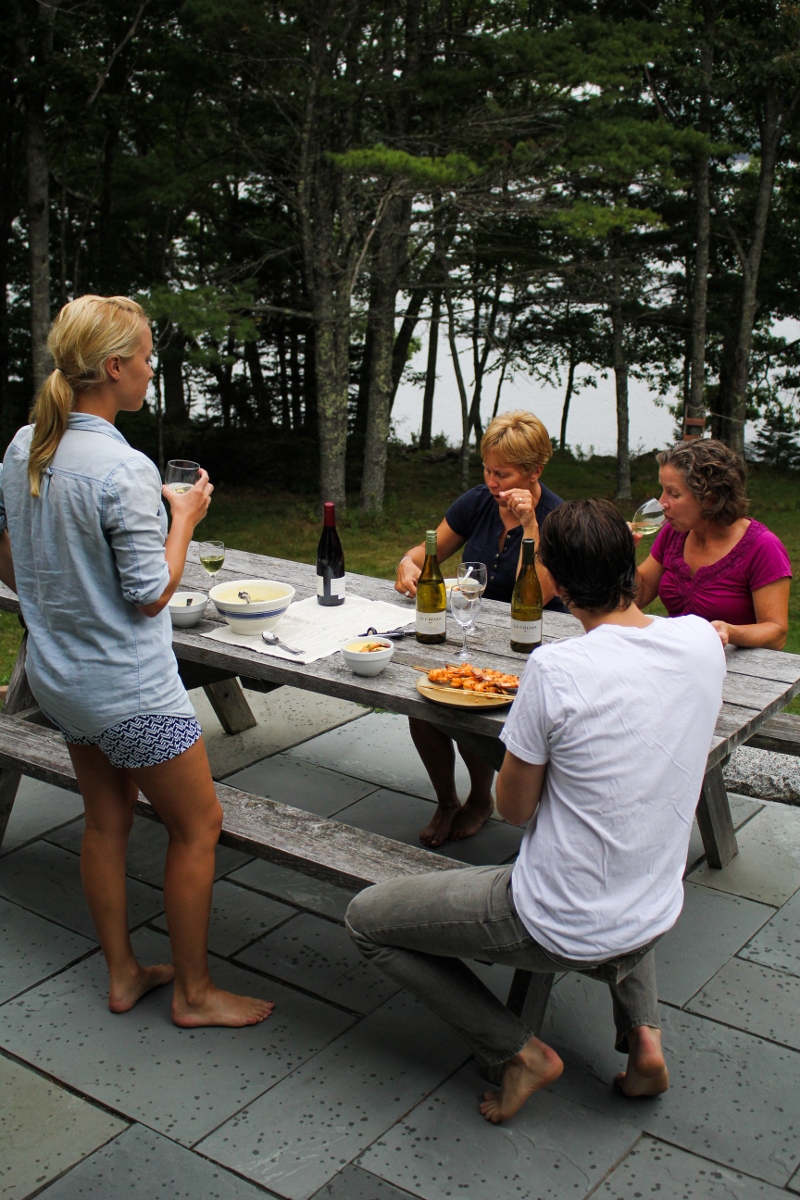 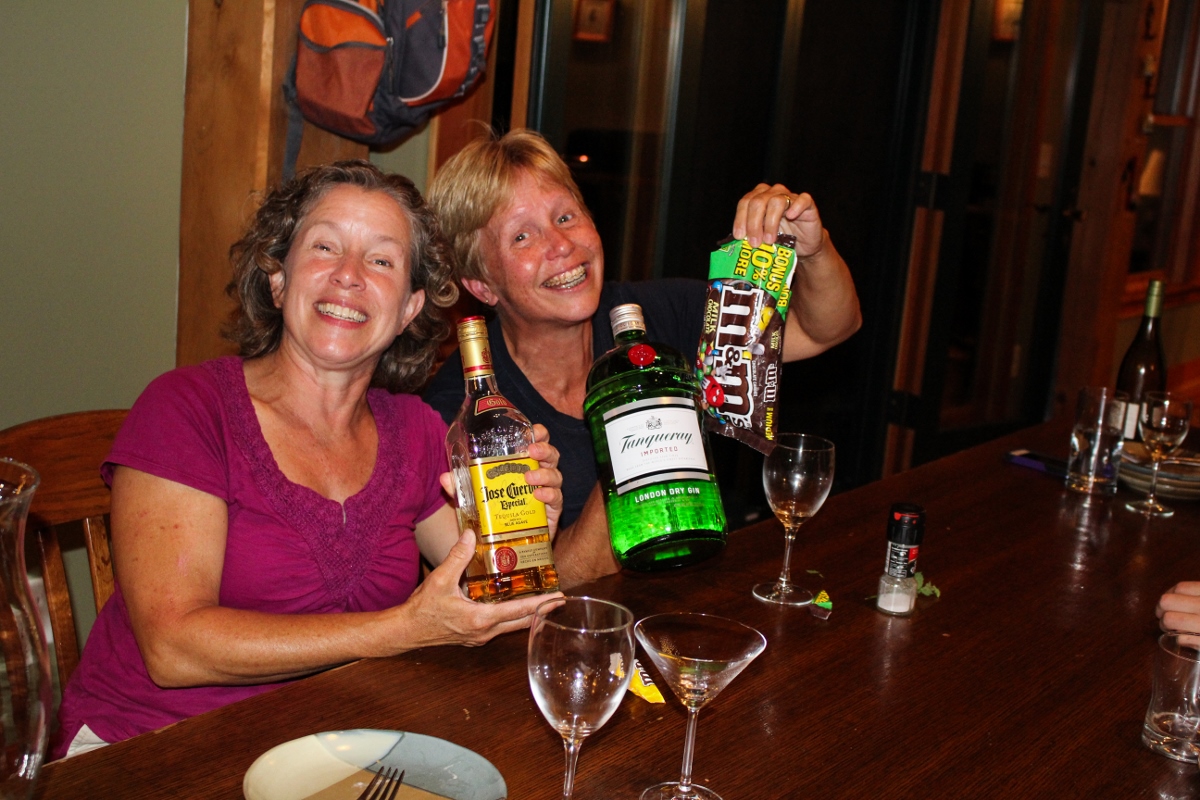 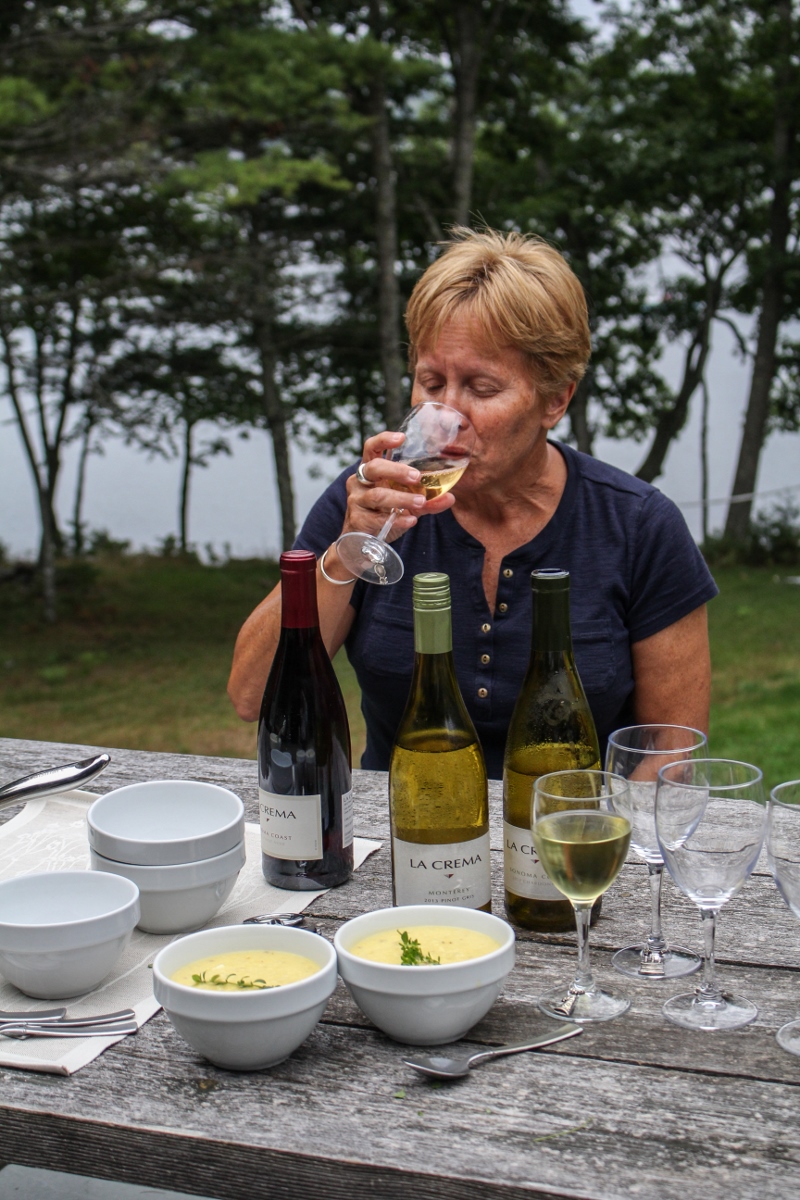 First Course: La Crema 2012 Sonoma Coast Chardonnay with Corn Chowder with Paprika-Grilled Shrimp. La Crema produces seven different Chardonnays, and their Sonoma Coast line is one of the most affordable. The wine is quite tart, opening with a lot of acidity up front, but quickly mellowing into a buttery finish. You can certainly taste oakiness, but it’s subtle and not a dominant characteristic. I personally found it to be a bit more citrusy than I like in a Chardonnay, but my mother, who is not usually a Chardonnay person, really loved this one. We served this with a creamy, pureed corn and potato chowder, using super sweet end of summer corn. The chowder was topped with a few grilled shrimp which had been marinated in a mix of garlic, lemon, olive oil, and smoked paprika. Although I dislike most seafood, I loved these shrimp – they were perfect on top of the rich chowder, and the wine cut through the richness nicely. 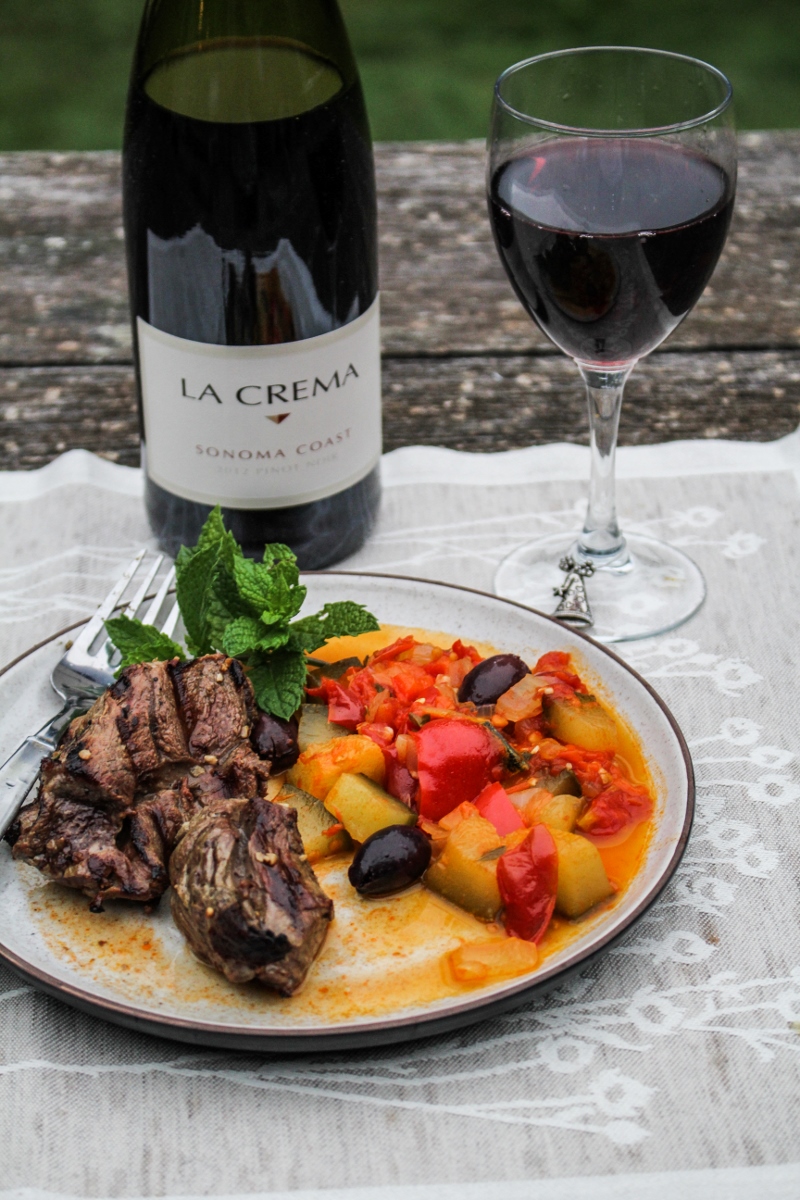 Second Course: La Crema 2012 Sonoma Coast Pinot Noir with Grilled Leg of Lamb with Ratatouille. The Pinot Noir was my favorite wine of the night, another release from the more affordable Sonoma Coast line. It was fairly dark in color compared to some Pinots, but light-bodied. Smooth and fruity, it was very drinkable, without feeling overly sweet or boring. For this pairing, we went a little on the heavy-side, grilling a sizeable piece of butterflied leg of lamb as the main course. We balanced the gaminess of the lamb with a meyer lemon and rosemary marinade, and kept the plate bright and acidic by serving the lamb with a tomato and kalamata olive ratatouille. This was basic, Mediterranean-inspired food – simple but well-executed fare for a simple but well-executed wine. 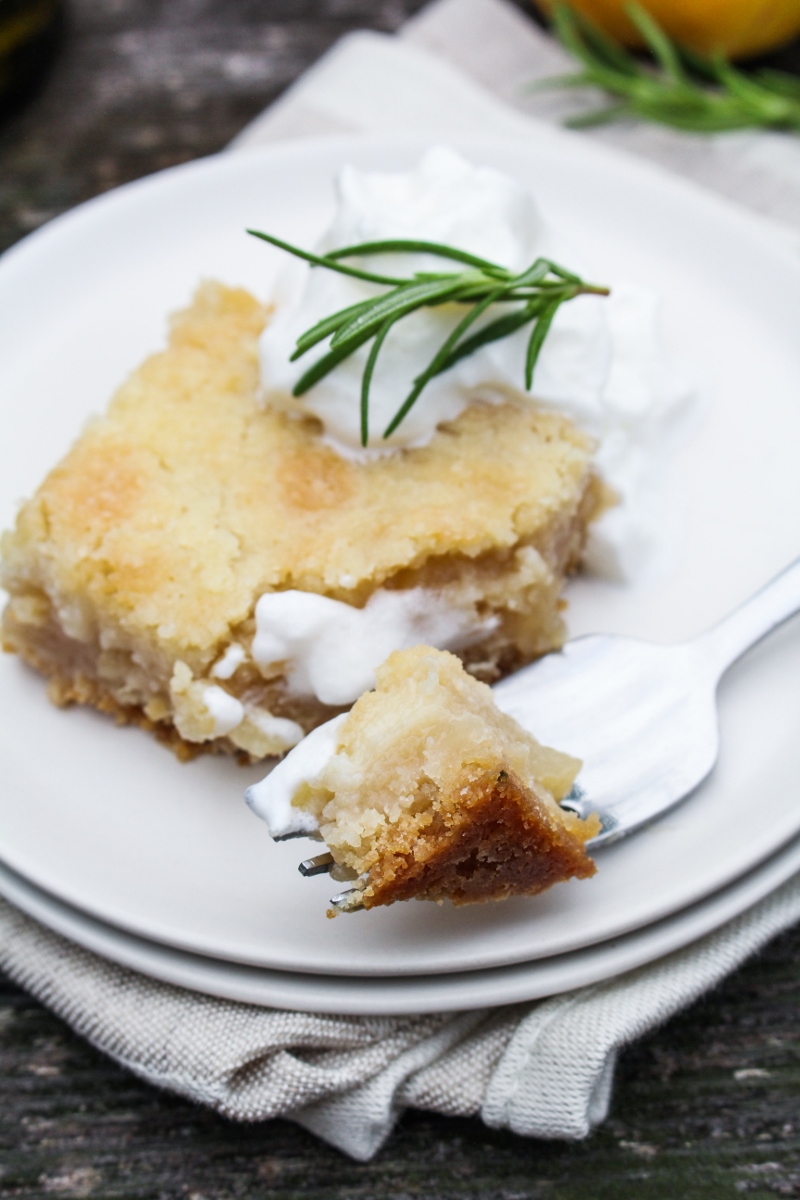 Third Course: La Crema 2013 Monterey Pinot Gris with Pear and Rosemary Crumble Bars. To be honest, by the time we poured the Pinot Gris my note-taking was getting a little sloppy, but I’m going to count that as a good sign overall. I did note that the Pinot Gris had a fairly strong minerality, and was heavy on the citrus flavor. La Crema’s tasting notes also indicate that it has a subtle note of Asian pear, which is the pairing I chose to pursue for the dessert course. Of course, serving a wine that is not a dessert wine with a sweet dessert is tricky, but the whole table felt that the Pinot Gris and the rosemary and pear crumble bars went very well together. The bars were composed of three parts: a rosemary shortbread crust, ripe pears poached in a mixture of Pinot Gris and honey, and a simple butter-and-sugar crumble topping. After an hour in the oven, the pears turn into an intense, caramelly jam while the crumble and the crust stay a buttery golden brown. I had initially planned to serve these with a rosemary-vanilla whipped cream, but a few missteps left me with some very delicious rosemary-vanilla butter that could not be brought back from the brink. Whipped cream from the can was a fine substitute.

Disclaimer: La Crema provided me with the wine for this post free of charge, but I was not otherwise compensated and all thoughts and opinions are my own. 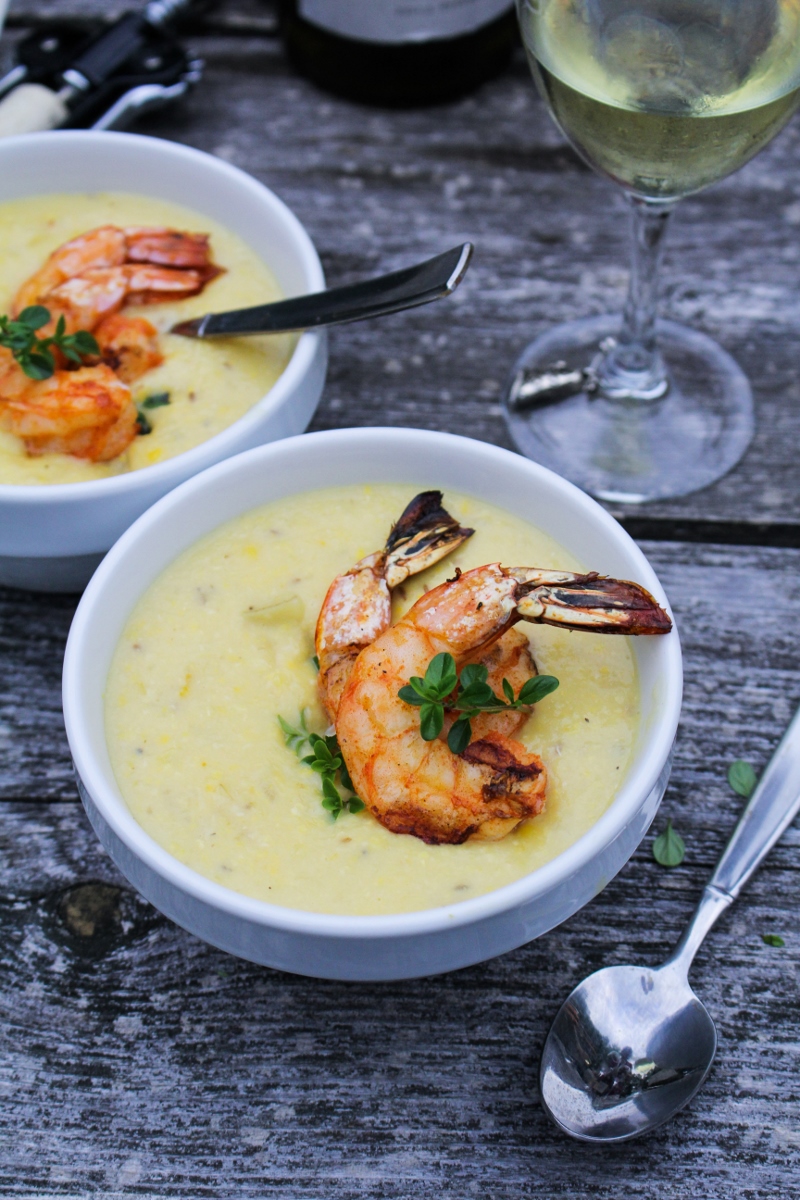 Note: You will need wooden grilling skewers to prepare the shrimp.

Grilled Leg of Lamb with Ratatouille 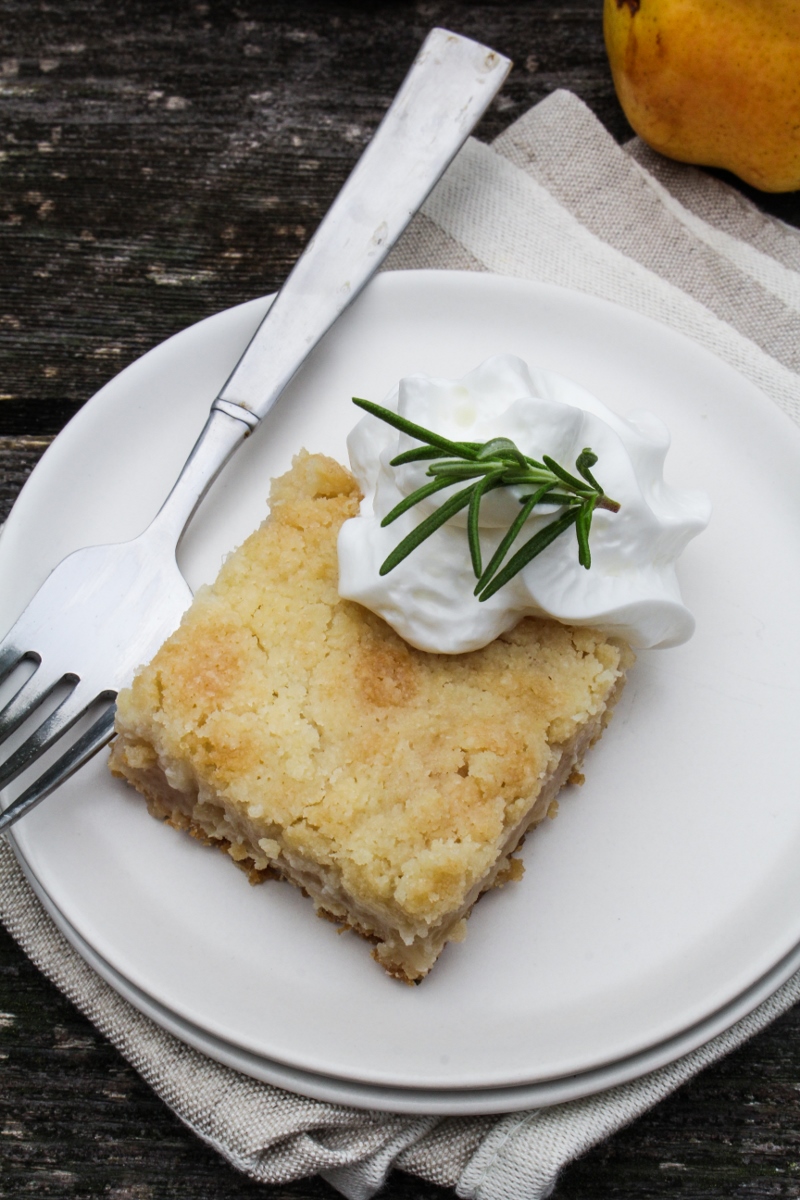