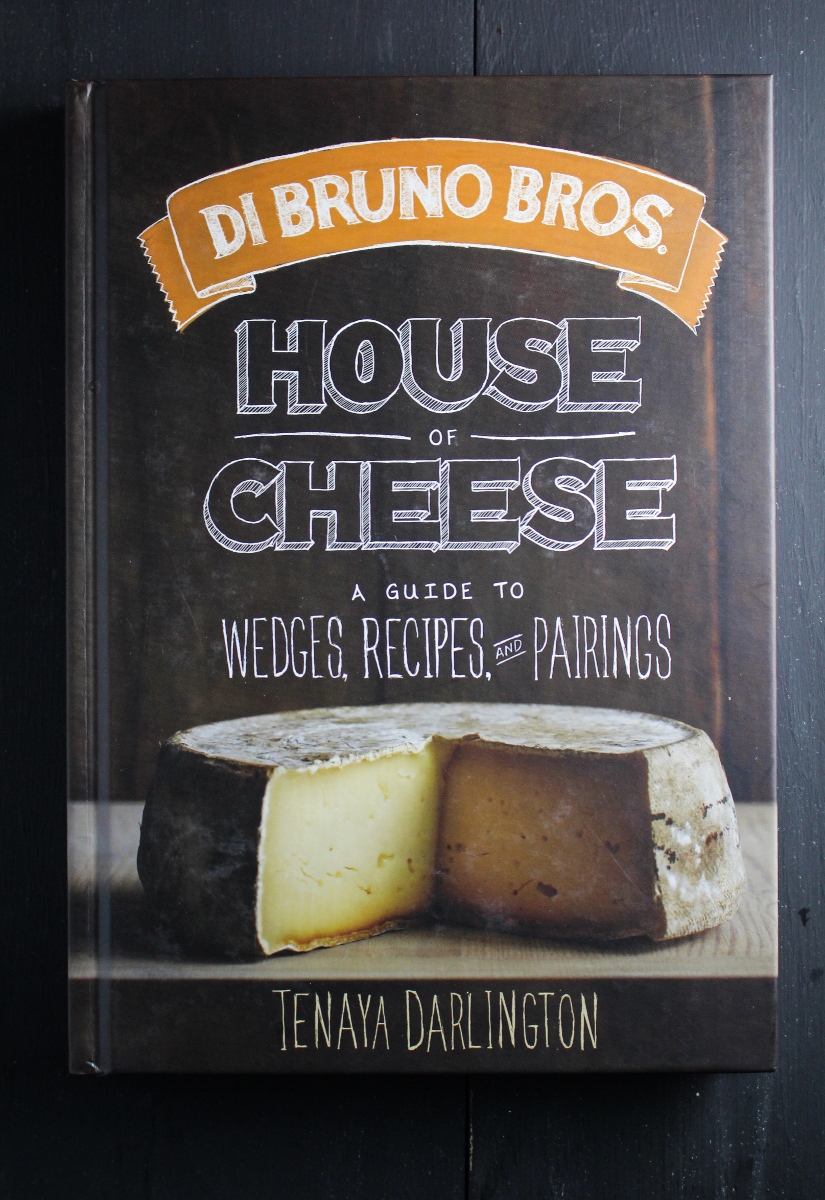 The Book: I  have a special book review for you today, one that involves a lot of cheese, an anniversary, and an awesome giveaway (scroll down for details). Although I’m not from Philly, I’m thrilled to be helping Philly-institution DiBruno Bros. celebrate their 75th anniversary as well as their first book, DiBruno Bros. House of Cheese: A Guide to Wedges, Recipes, and Pairings. DiBruno Bros. is a gourmet market specializing in high-end cheeses and cured meats, as well as other specialty food products. Family owned and operated, its the kind of gourmet culinary institution that’s worth supporting and preserving. Their only brick and mortar locations are in Philadelphia, but the rest of us can enjoy their delicious products by purchasing them through their online store. 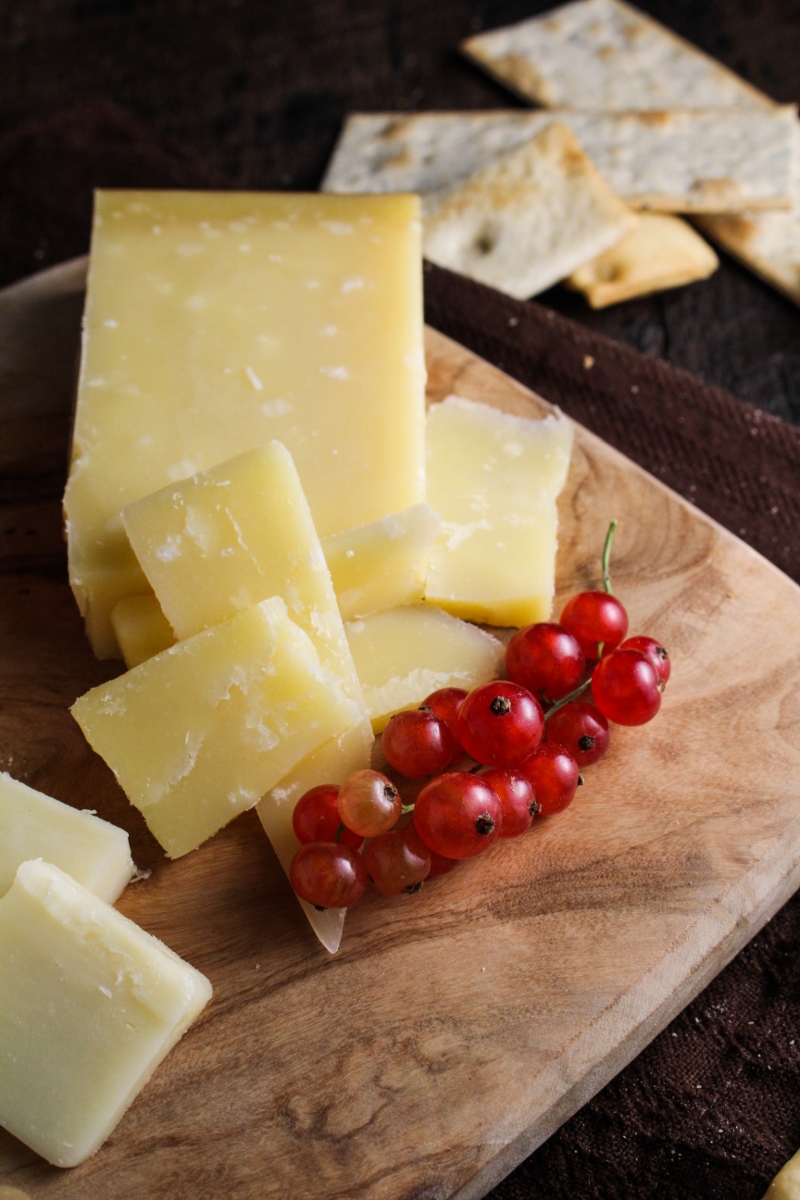 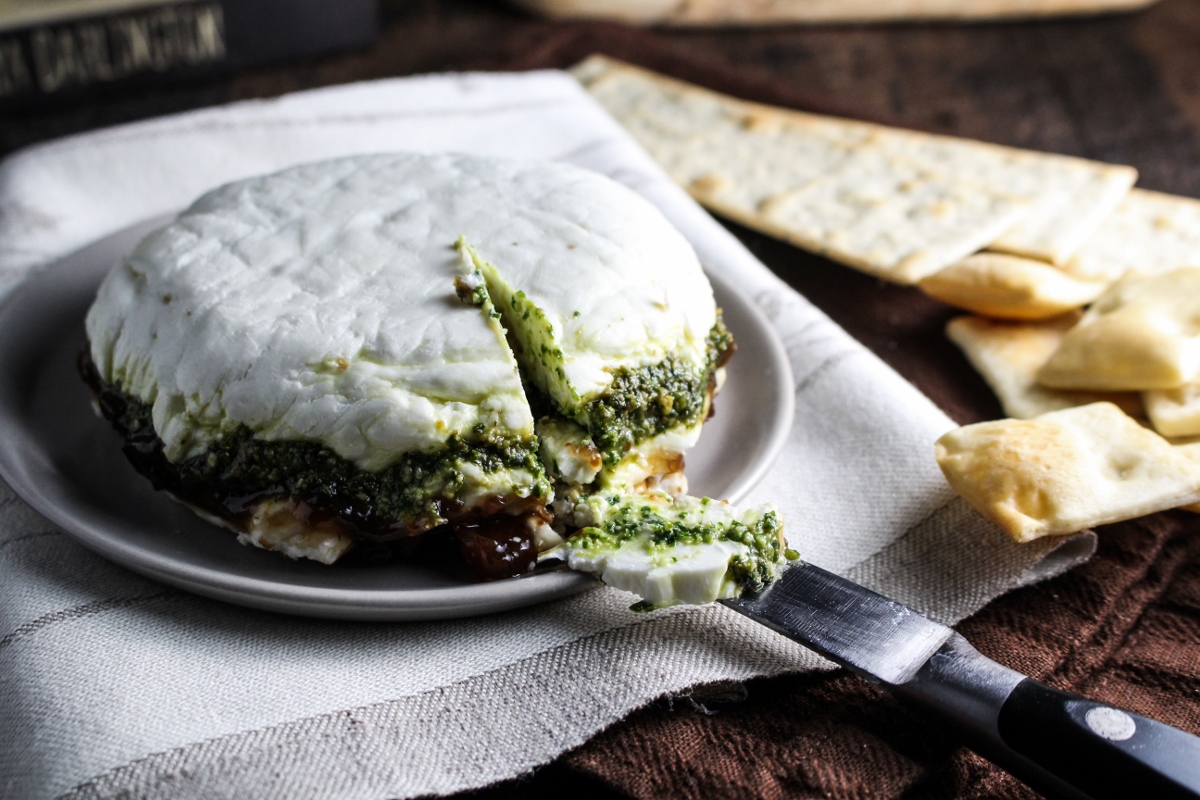 Last year, DiBruno Bros. released their first book, House of Cheese, in partnership with blogger Tenaya Darlington, author of Madame Fromage. The bulk of the book is composed of descriptions of various cheeses, separated into 10 categories, from “Free Spirits” to “Pierced Punks.” The descriptions of each cheese are quirky and engaging – I’ve never heard cheese described with such personality and detail! – and each includes a series of food and drink pairings for that particular cheese. Tenaya writes with a subtle sense of humor that had me cracking a smile at descriptions like “full of wild, fatty-licious stink – prepare yourself for the smell of boiled peanuts, pick-up truck exhaust, and bare feet [Cato Corner Farm’s Hooligan]” and “wrapped in walnut leaves and aged in mountain caves, it’s the sort of cheese you want everyone to see that you’re eating [Foja de Noce].” Interspersed throughout the descriptions are notes and anecdotes about making, serving, and eating cheese, cheese board suggestions, and simple recipes for appetizers to serve with your cheese. The themed cheese boards with pairings will ensure that you really impress your guests at your next party – I, for one, will be trying the “fireside party” board when the weather turns colder, which includes Truffle Tremor paired with roasted chestnuts and Stilton paired with dark chocolate. Yum. All told, the book is both pleasantly engaging and very informative, covering a much broader range of cheeses than I expected to find. The next time I step up to the cheese counter, I’ll certainly have done my research about what I really want to try. 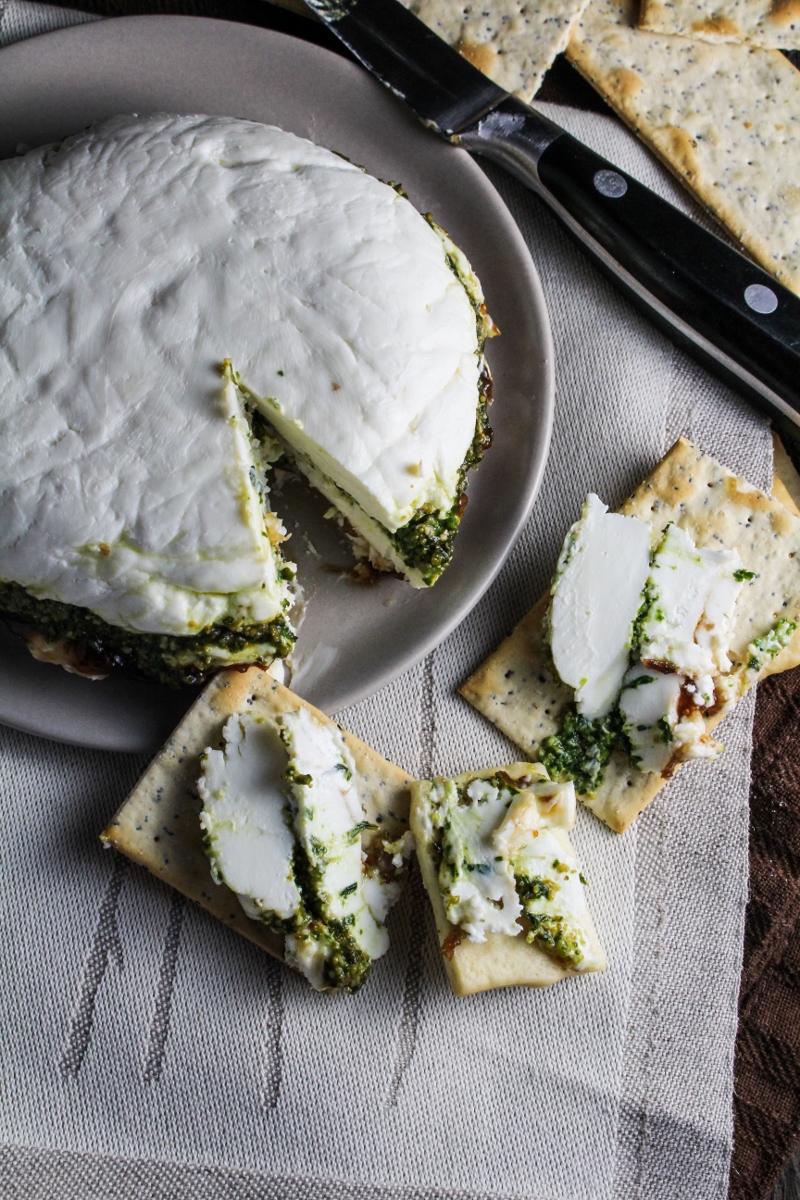 The Food: While there’s only a handful of recipes included in House of Cheese (the focus is more on the cheese descriptions and pairings), I don’t like publishing book reviews without at least giving you a taste of whatever recipes there are, so I decided to make the Goat Cheese Terrine with Fig Jam and Pesto. Like most of the recipes in the book, it’s very simple to pull together – it only took me about 10 minutes to whip up – and the results are really lovely. I’m not sure I would have naturally come up with the combination of pesto and fig jam, but the sweet and herbal flavors are tied together well by the layer of goat cheese in between. This is the kind of appetizer that disappears in no time at a party, the sort of thing that draws everyone into the same room to stand around the table and nibble on cheese-covered crackers and chat. It takes a little bit of patience to get the cheese to spread out evenly, but that’s the only part that is even remotely tricky. Even my least culinary friends could handle this one. 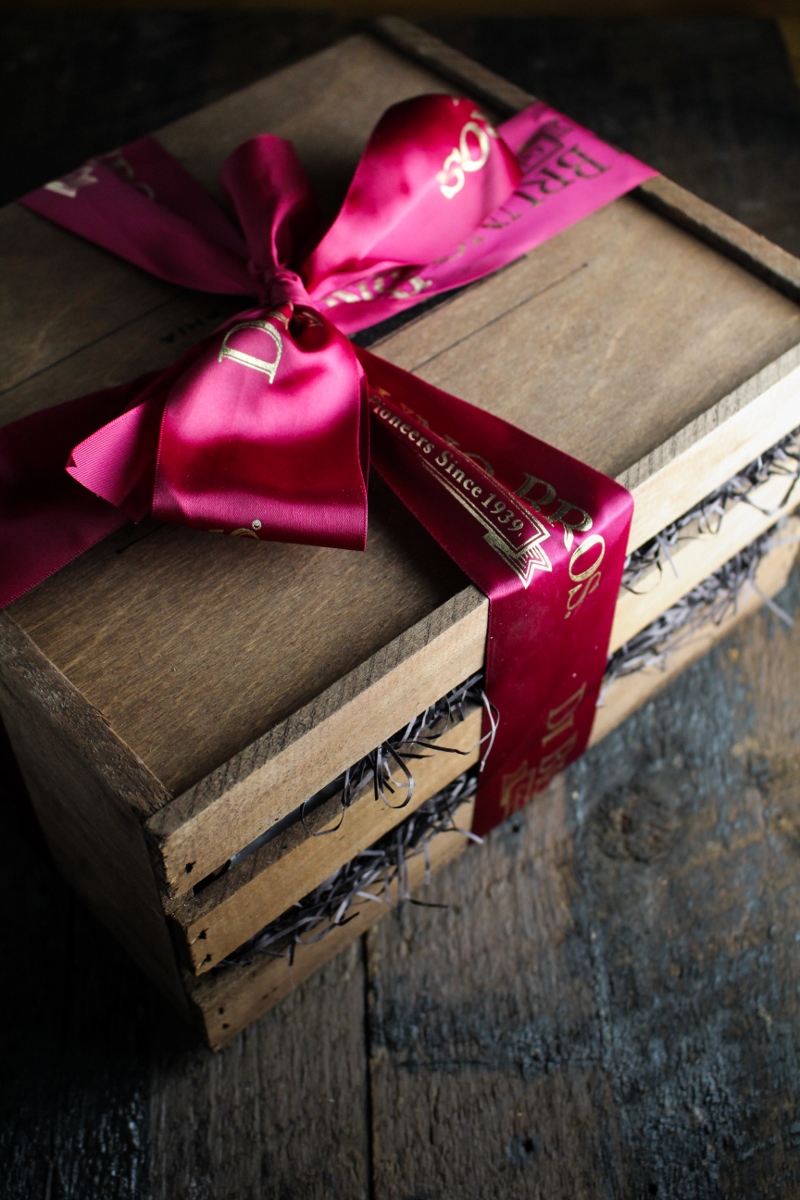 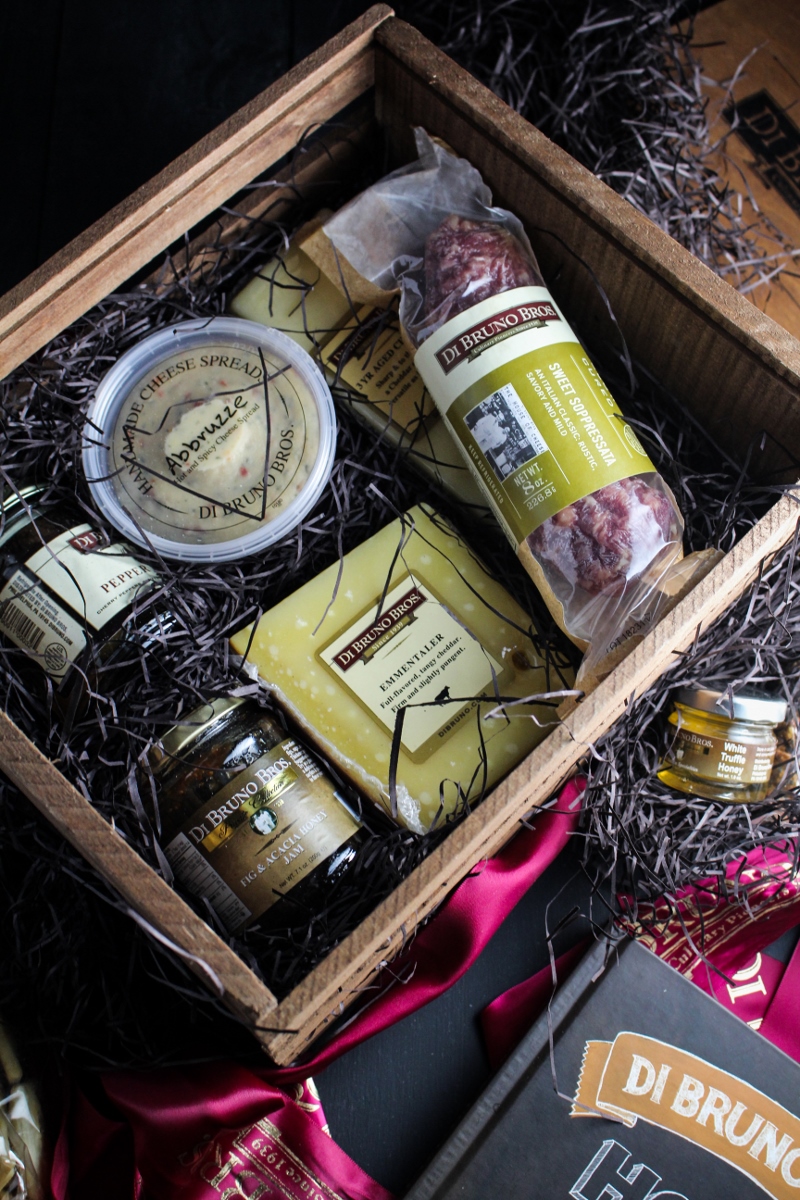 Congratulations to Victoria C on winning this giveaway! Enjoy your goodies :-) 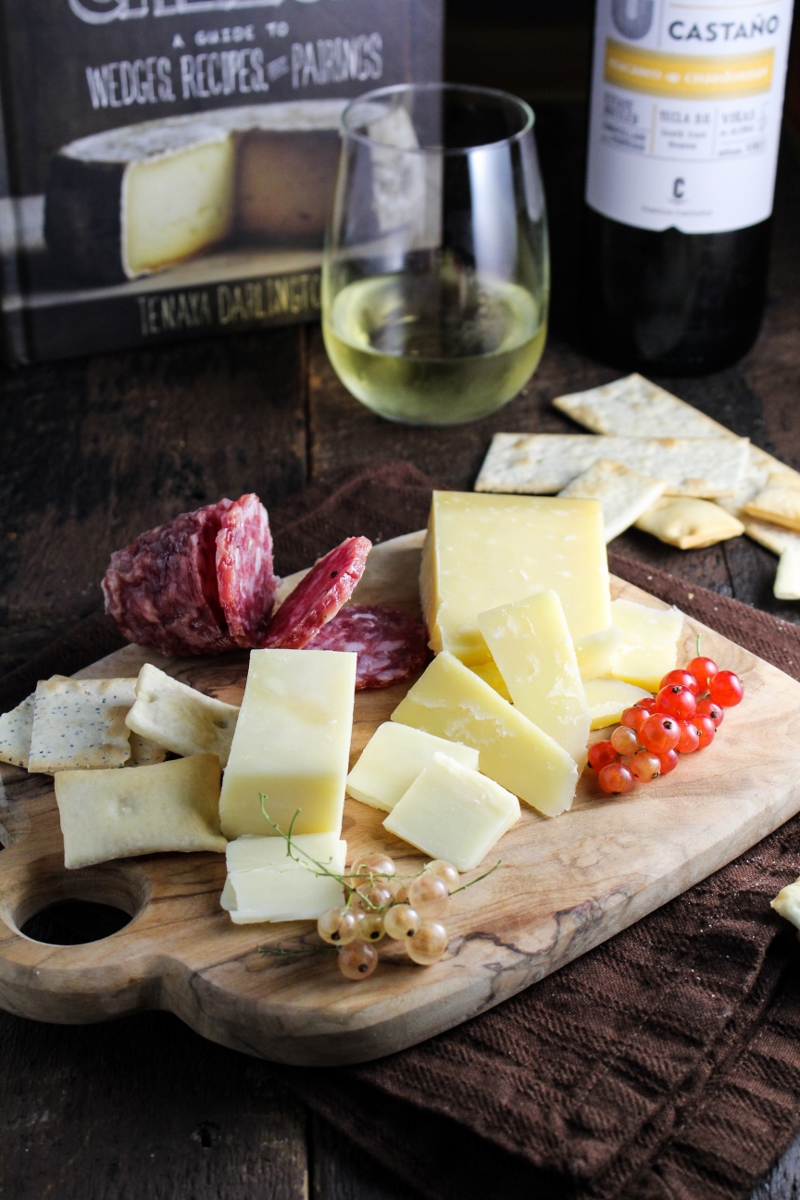 DiBruno Bros. sent me a copy of House as Cheese, as well as a 75th anniversary gift basket free of charge for this post. I was not otherwise compensated, and all opinions are my own. 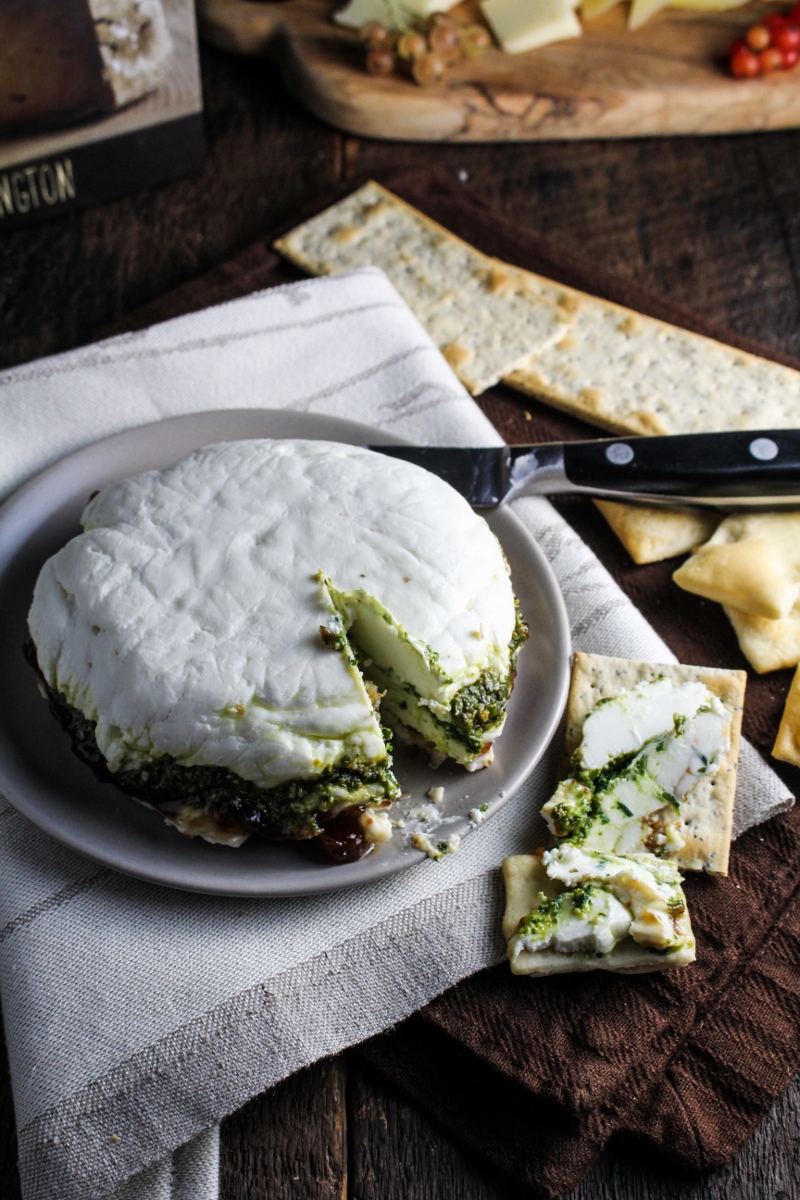