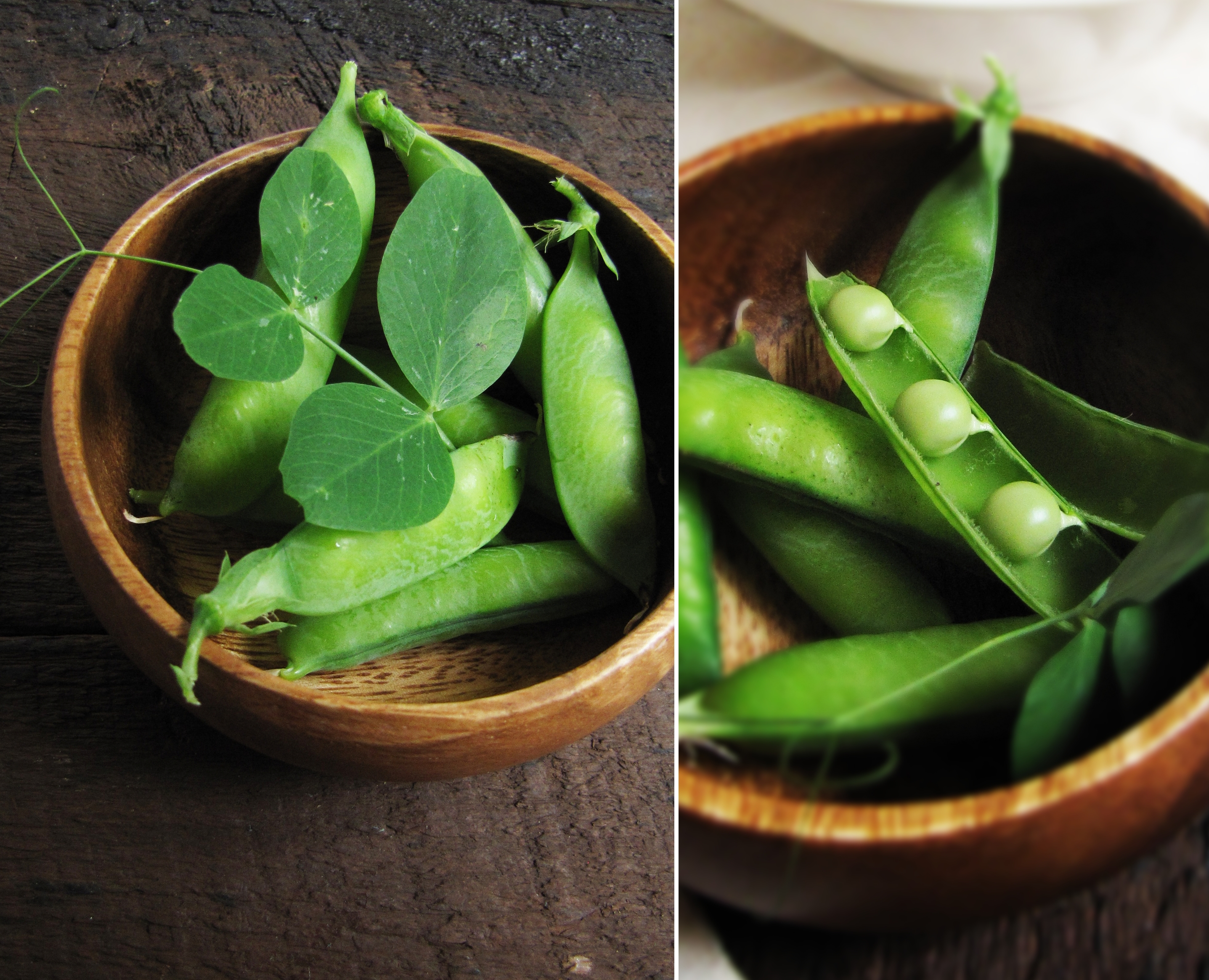 I’m here to tell you about our garden.

I’ve been looking forward to writing this post since the beginning of February, when I planted the first tiny parsley seeds and proceeded to check them hourly for signs of growth.  I’ve taken hundreds of pictures, from those first tiny sprouts to the squash flowers that have just opened up to the fat little pea pods on the vines (peas! actual peas!)  and I’ve been dying to share them.  Well, I’ve shared a couple.  But really, I didn’t want to say too much about the garden in case it was a total failure.  Having written about it prematurely would only have compounded my disappointment.  I love this garden.  Like, I really love it. 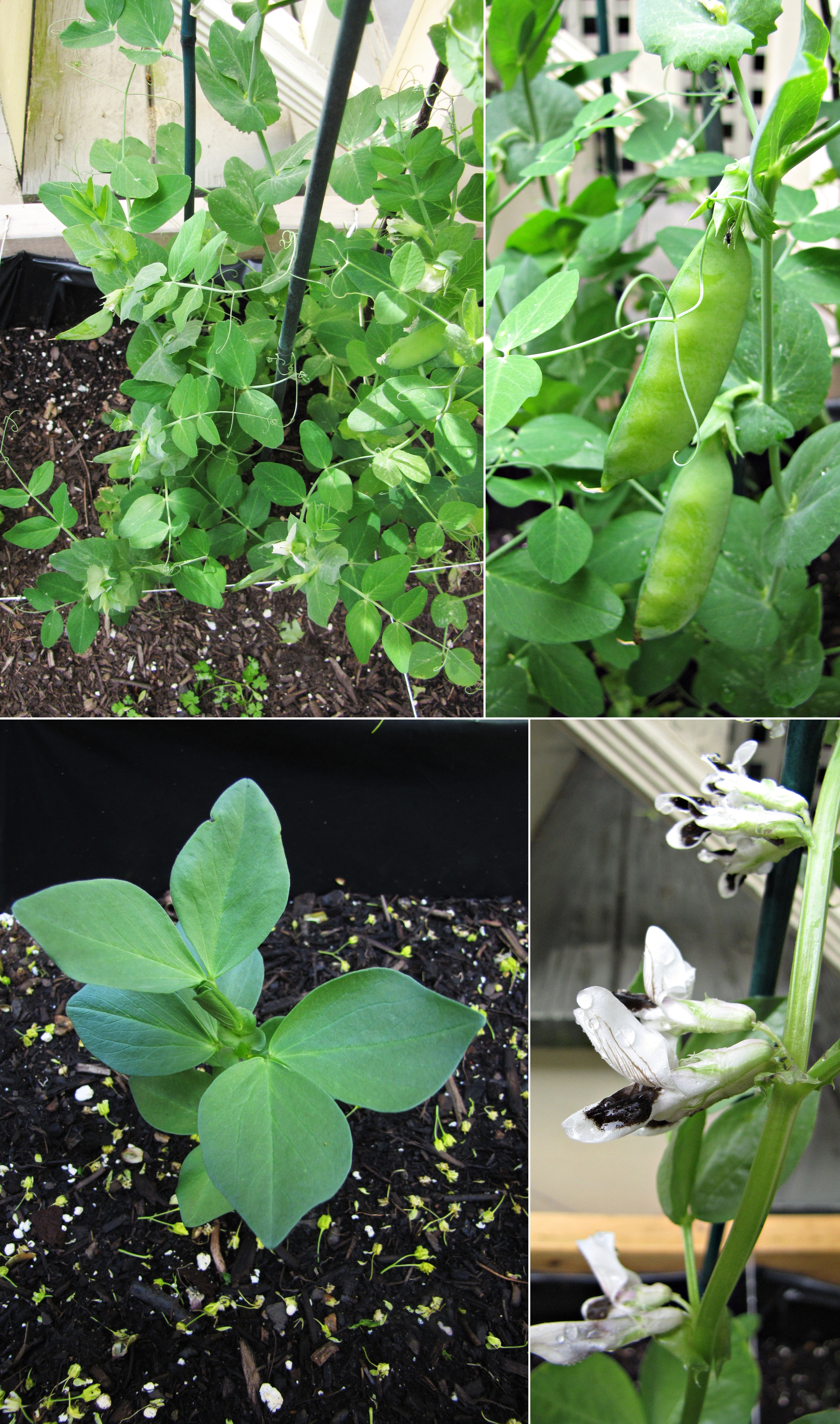 From the get-go, I decided that if I ate even one thing from the garden, I would consider it a success.  And now that I’ve harvested not one, but two things from the garden (arugula! peas!), I’m taking a deep breath and declaring success.  And telling you all about it.

Dork alert: I’ve been keeping a garden diary.  Growing things is not something I have that much experience with, and when I’m unsure about something, I write about it until I understand it.  That’s why I have 8 journals full of notes about boys – they’re not as simple as they seem at first, what can I say?  But looking back at the notes I’ve taken in the past 4 months reveals how much uncertainty there is for a first time gardener – there was the week when the trees leafed out and the raised bed stopped getting morning sun, and I wondered if the sun would ever be high enough in the sky to give it afternoon sun (it is).  The days when the lemon tree suddenly dropped all it’s leaves caused a bit of panic too (it’s covered in blossoms now, although still a little low on greenery).  Just the other morning I found that some creature had hopped into the raised bed and eaten an entire kale plant, leaving no signs that the plant had ever existed.  Little heartaches are left and right in this process, but working in the garden with Trevor has become one of my favorite activities, and eating the first fresh peas this week has seemed more like icing on the cake than the natural outcome of all the hard work we’ve put into it. 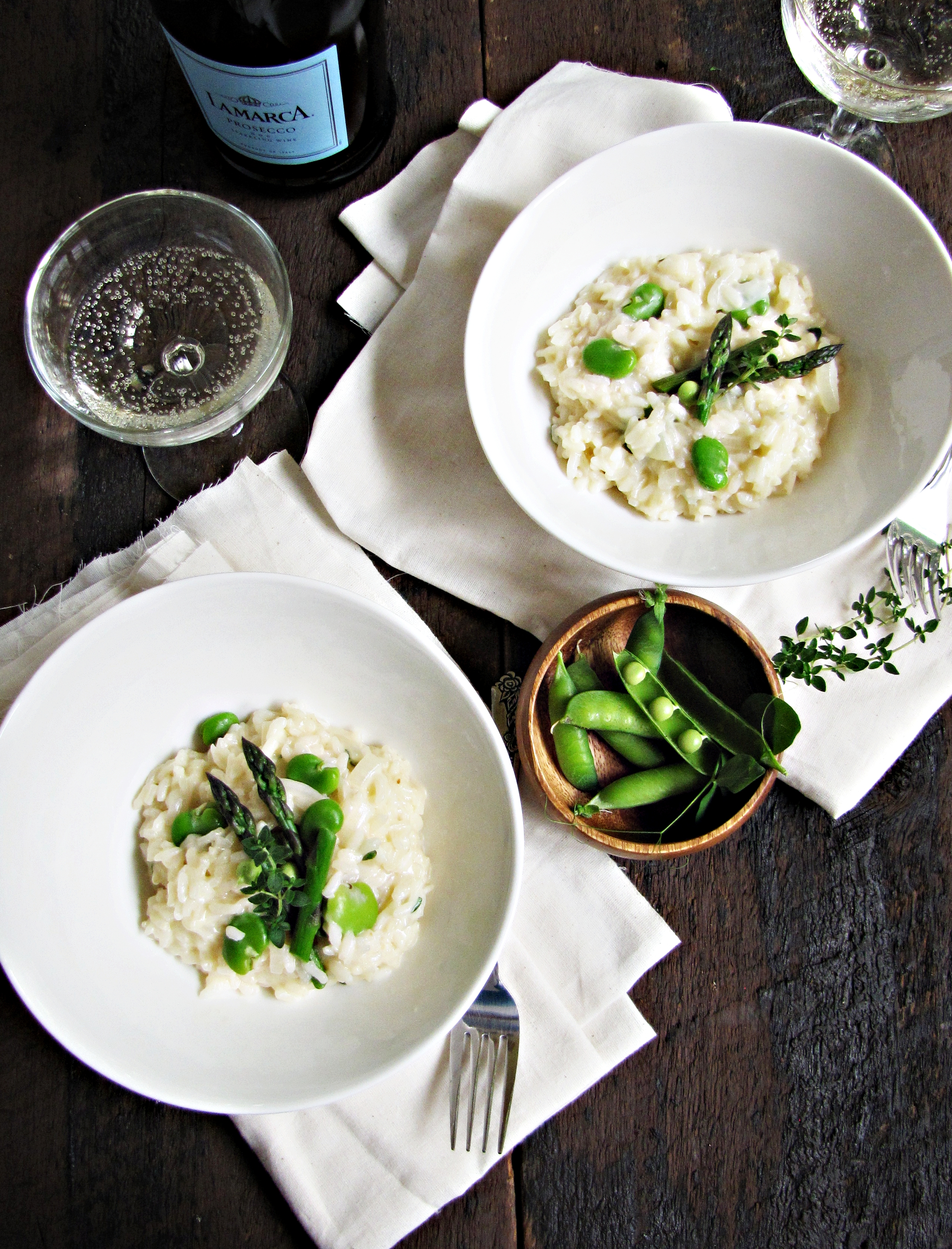 I started planning the garden out in January.  I’ll admit, we were a little over-zealous, and the garden quickly spread from being contained in a 16 sq. ft raised bed, to a 16 sq. ft raised bed and about 20 pots and containers along the driveway.  With the exception of 1 eggplant, the thyme, the oregano, and the trees, we started everything from seed.  In February, we started the basil, sage, parsley, oregano, thyme, broccoli, eggplant, and tomatoes.  I invested in a heating mat and found that, even though they seem like a waste of money, the Jiffy pop-up seed pods were much more effective than planting in little pots with seed starter.  The oregano and thyme sprouted but never really grew, so we replaced them with big plants from Pemberton.  That first batch of basil got dried out when I went away for the weekend and had to be restarted.  The parsley was a slow-starter, but is now doing OK in the raised bed.  One of the eggplants really took off, and has it’s first flowers now.  The tomatoes have been the biggest success – San Marzanos and Sweet 100 cherry tomatoes.  The 5 cherry tomatoes are all huge and just getting their first tiny green tomatoes.  In March, the shelling peas and fava beans got planted directly in the bed, the lettuces went into a large stone bird bath, and brussels sprouts and kale got planted inside.  Then in April, the squash, cucumbers, and beets went in. 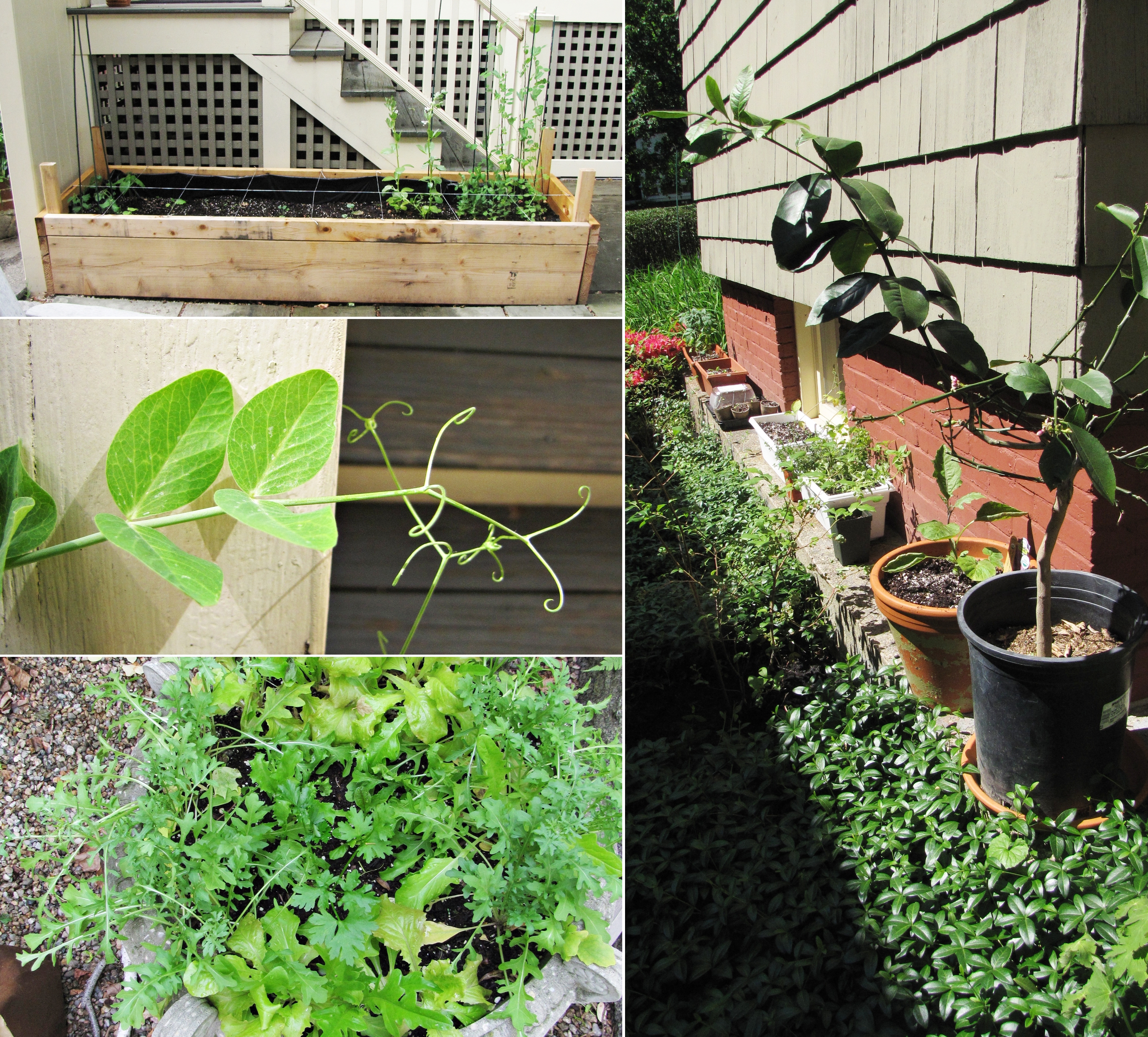 And now?  In the raised bed are 2 varieties of English shelling peas, fava beans, parsley, broccoli, cucumbers, roma beans, edamame, kale, and brussels sprouts.  On the porch?  A fig tree and a strawberry plant.  In the backyard, a planter that’s overgrown with arugula, parsley, radicchio, and lettuce, and containers with raspberries, more broccoli, mint, and sage.  In pots along the driveway, where it’s the sunniest, are the meyer lemon tree, tomatoes, summer squash, watermelons, basil – both green and purple, and cucumbers.  It’s a giant hodge podge of green, and I have no idea what will work and what won’t, but it’s the best experiment I’ve done in a long time. 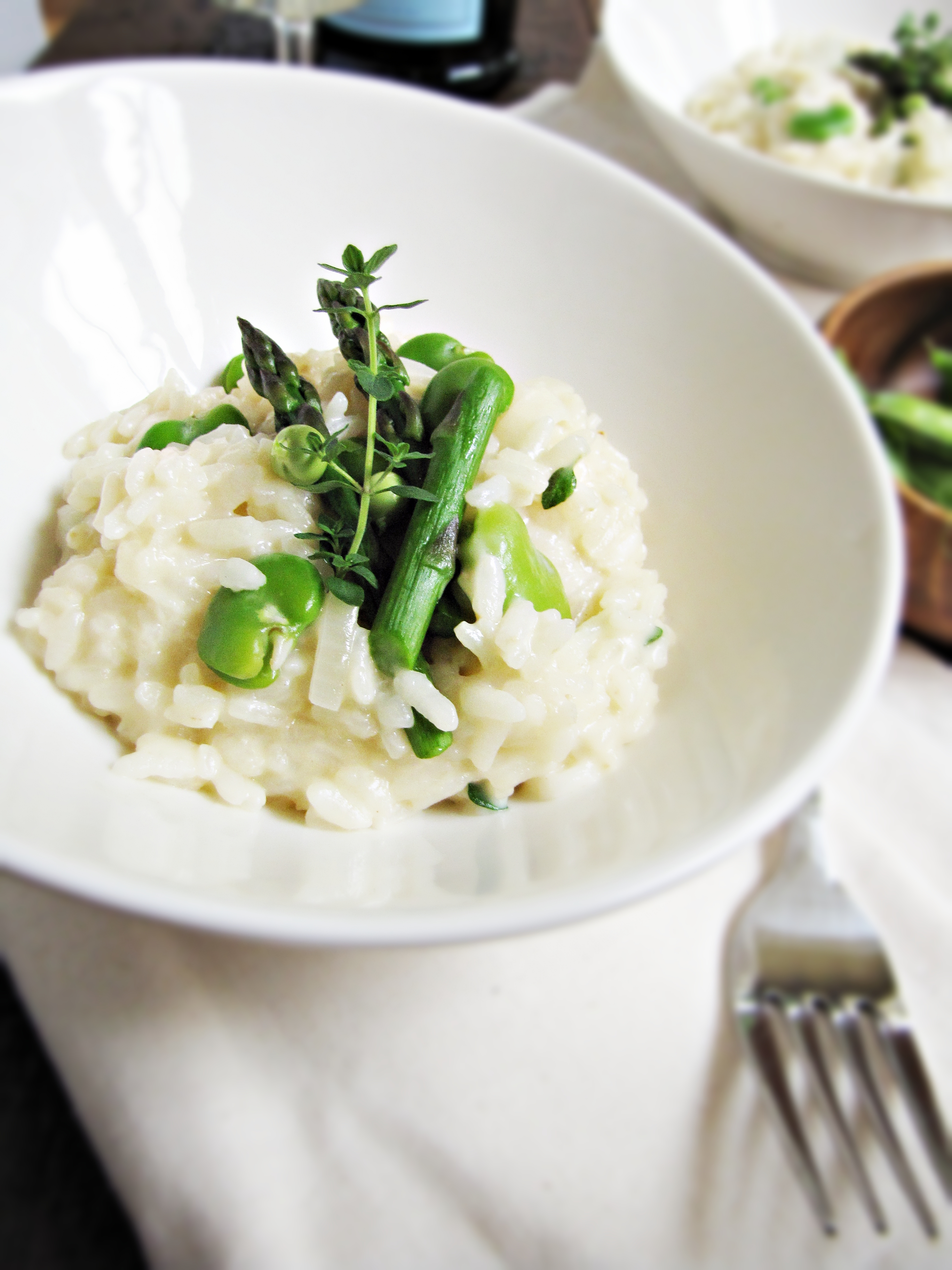 To celebrate the arrival of the peas, the success of the garden, and the beginning of summer, I had a little dinner for Trevor and I on Saturday night.  An actual dinner – with a glass of prosecco, a main course, and a dessert, where we sat down at the same time at the table with bowls and forks rather than eating out of tupperware from the fridge.  Mostly I just eat the peas straight while I’m sitting in the garden – they are so incredibly sweet and cool and juicy – but I wanted to use at least a few in a real meal.  So I made a spring risotto, with peas, fava beans, asparagus, mascarpone, and pecorino – all the flavors of spring.  The fava beans and asparagus aren’t from our garden, but they are local and very tender and flavorful, so we’ll take ’em.  It was delicious.  And for dessert, there were parfaits with chocolate shortbread, whipped mascarpone, and lovely red-ripe strawberries from the farmer’s market… but you’ll have to wait for Tuesday for that recipe! 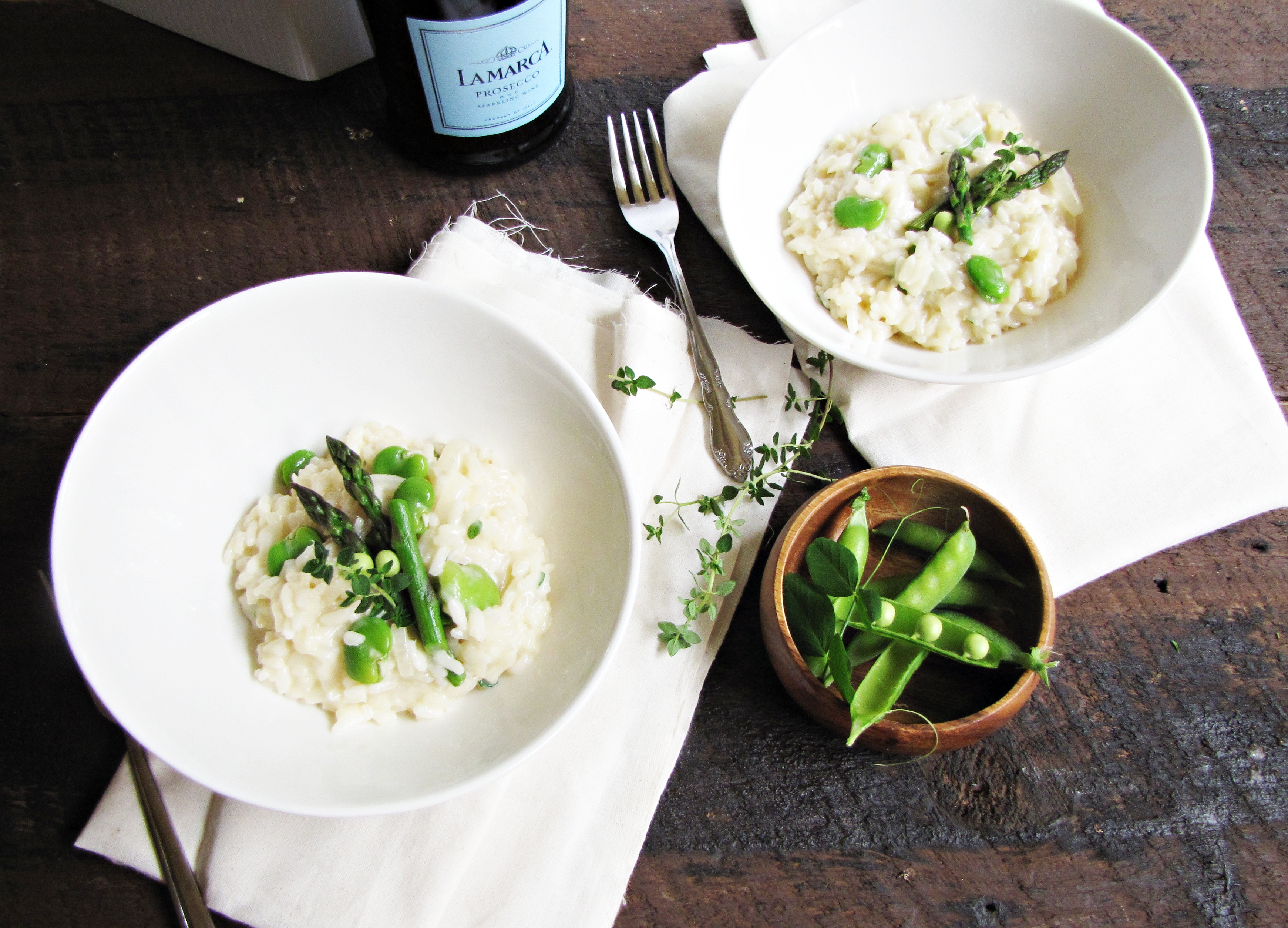 A Katie at the Kitchen Door original.  Serves 4.