In the fourth and final round of Marx Food’s Ridiculously Delicious challenge, the Marx dudes sent each of the ten remaining competitors something pricey, perishable, and totally foreign to me – fresh wasabi root.   I was immediately excited about working with a completely new ingredient (I don’t even eat sushi so I’m really a wasabi newb) because it’s much easier to be creative when you don’t already have strong associations with an ingredient.  So, wasabi safely wrapped in a damp paper towel and stored in the fridge,  I began learning, using the collective experience of the food-loving internet as my guide.

In the end, I had a lengthy list of flavor combinations and recipe ideas, ranging from dark chocolate, candied ginger, and wasabi cupcakes to a garlic and wasabi crusted Ahi tuna.  For the past two weeks I have been entirely bogged down with work and major deadlines, so I haven’t had any time to think creatively or cook or read or do much of anything that wasn’t directly related to engineering.  With this wave of deadlines finishing up this weekend, I decided to get all of my pent up creative cooking energy out there at once, and create a wasabi trio.

I wanted my wasabi trio to consist of three distinct elements, all with wasabi as a primary flavor, that complemented and enhanced one another.  They would be served together, so that a bite of one could be followed by a bite of another to a positive effect.  Running down my list of ingredients, I chose several that seemed to all work together: wasabi (duh), avocado, grapefruit, ginger, and apple.  Beyond the flavors needing to combine well, I wanted the three dishes to vary in temperature and texture, as well as in visual presentation.  My original menu?  Chilled avocado-wasabi soup with caramelized grapefruit, wasabi-potato latkes with fuji-ginger sour cream, and wasabi cupcakes with a grapefruit buttercream. Since the challenge only called for one recipe, however, I decided to make all three and only submit the one that turned out the best. 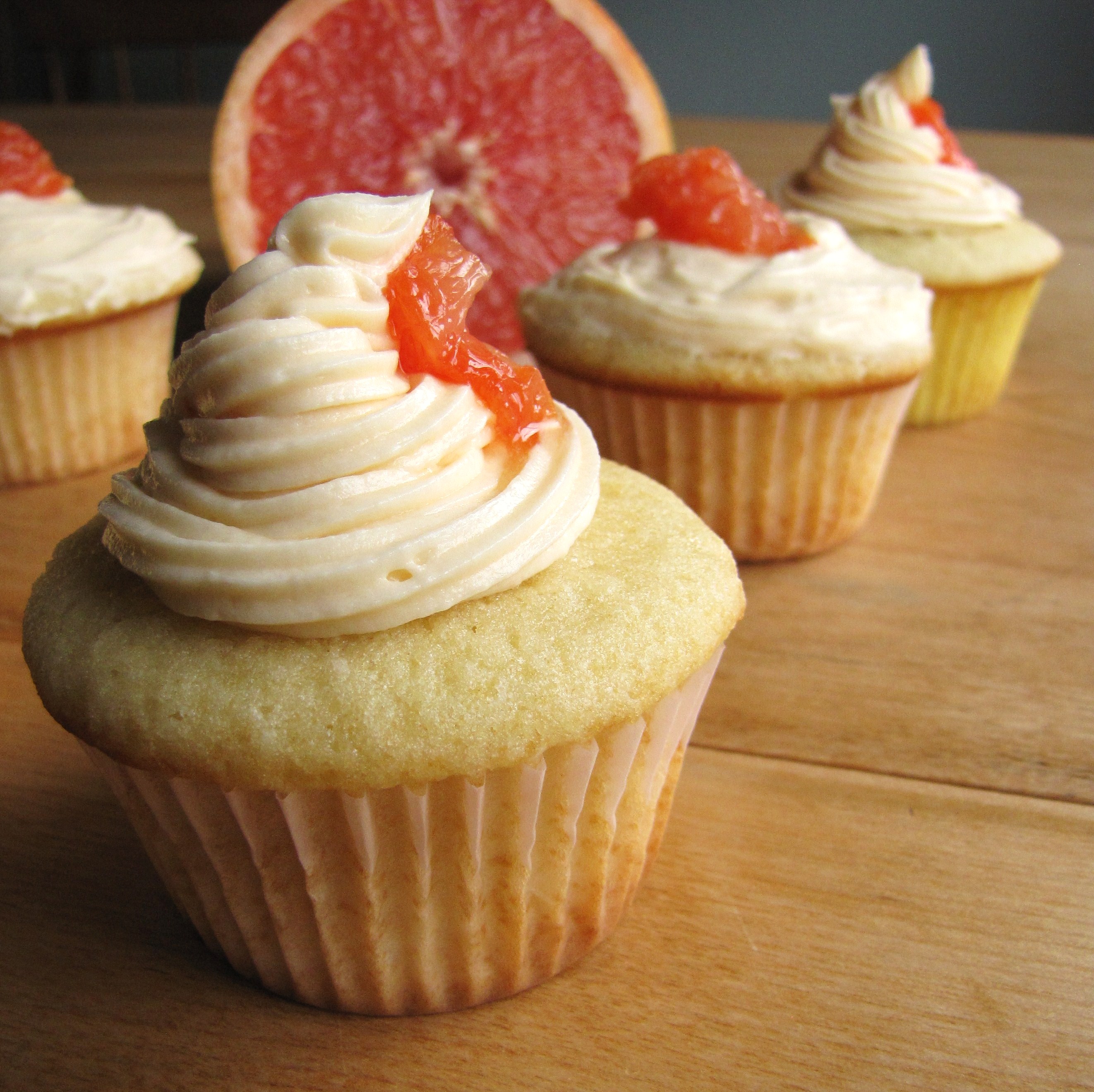 Clearly, my visions for these ugly little roots were grand.  My successes?  More moderate.  All three dishes were good, but only the soup really allowed the wasabi to shine through, which, after all, was the point of the challenge.  The latkes were delicious but didn’t have any wasabi taste at all, and the cupcakes were great but with only a mild hint of spice (which, to be fair, is probably how you would want a wasabi cupcake to taste).  The soup however, had a pleasing hit of wasabi at the first bite, followed by the scent of lime and the smooth, mild avocado taste.  So the avocado-wasabi soup it is!  Which is kind of exciting because it’s also the recipe that was the most original, i.e. I didn’t just add wasabi to someone else’s recipe.  Minus the caramelized grapefruit, which could easily be replaced by a few chunks of fresh grapefruit, this soup is super quick to throw together and full of delicate flavors.  Salt very gently, as even a little bit too much salt will overwhelm the flavor of the avocado and lime.  It could be served with the grapefruit still warm to contrast the smooth, cool avocado, or with a few sesame seeds or tortilla chip pieces on top for a contrasting texture.

For those of you eyeing the cupcakes or craving latkes, I’ll be posting the wasabi-free versions of those recipes soon!  Although, you could always throw a little fresh wasabi in there for good measure… 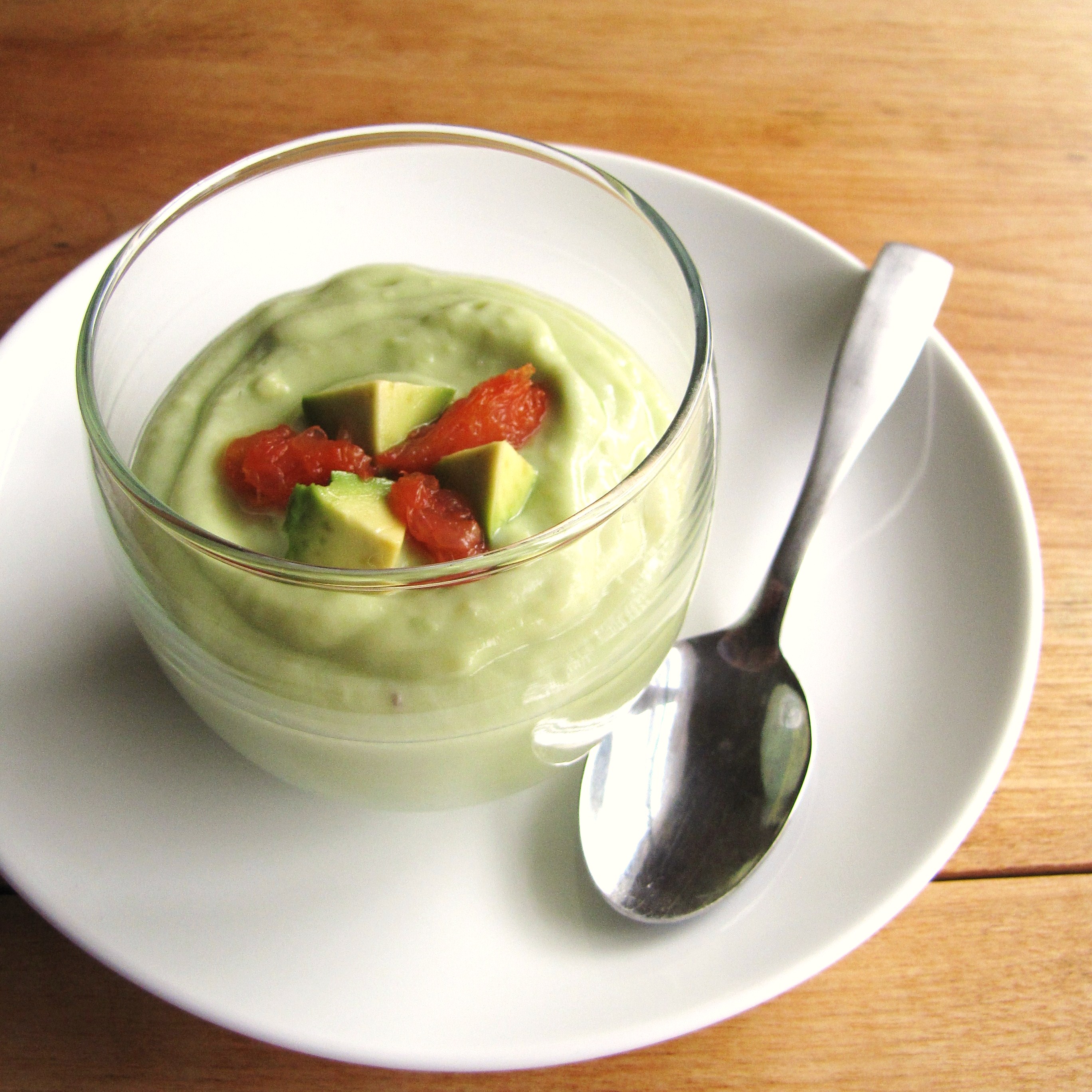