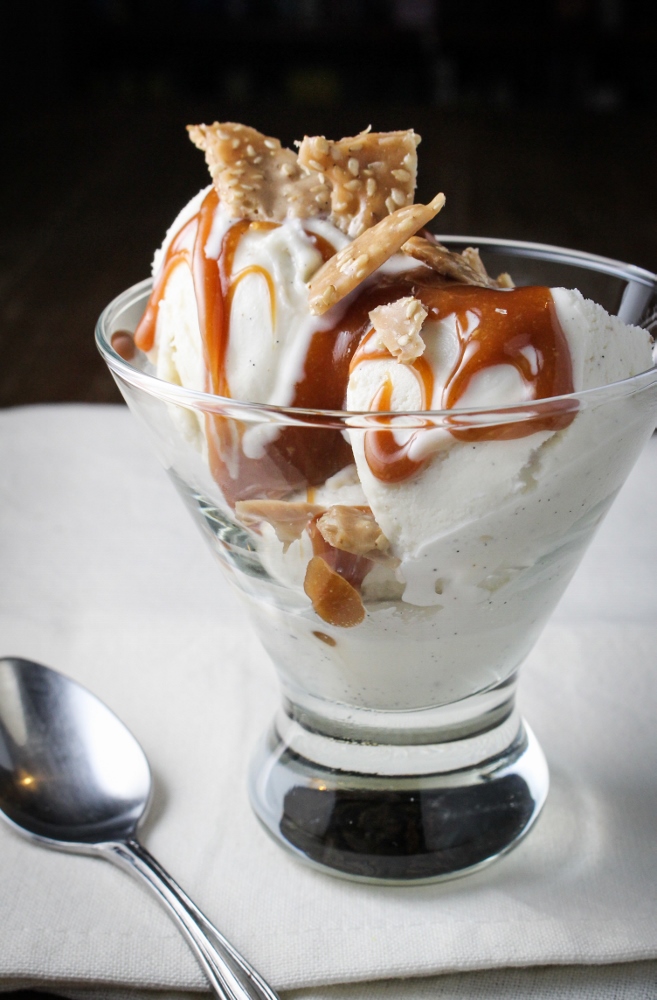 A little while ago, Graeter’s reached out to me I’d asked if I was interested in trying out their new ice cream flavors – three new “A Little Less Indulgent” varieties, and four new gelatos. To be perfectly honest, I’d never heard of Graeter’s – they’re more of a midwestern brand and we have plenty of great creameries in New England – but I said yes anyways, because, well, I really love ice cream. Like, more than most people, I think. I didn’t make any commitment to writing about the new flavors, but after my first few bites, I knew I would have to share, because it would have been a crime not to. It’s really good stuff. I’m a particular fan of the Salted Caramel Truffle Gelato, which I savored two spoonfuls at a time, straight out of the pint, every night for a good two weeks. It’s fabulously soft and creamy and richly flavored, and although I’m not sure I could swallow the $10/pint cost of ordering it online, if I ever see some in a store near me, I’m stocking up immediately. 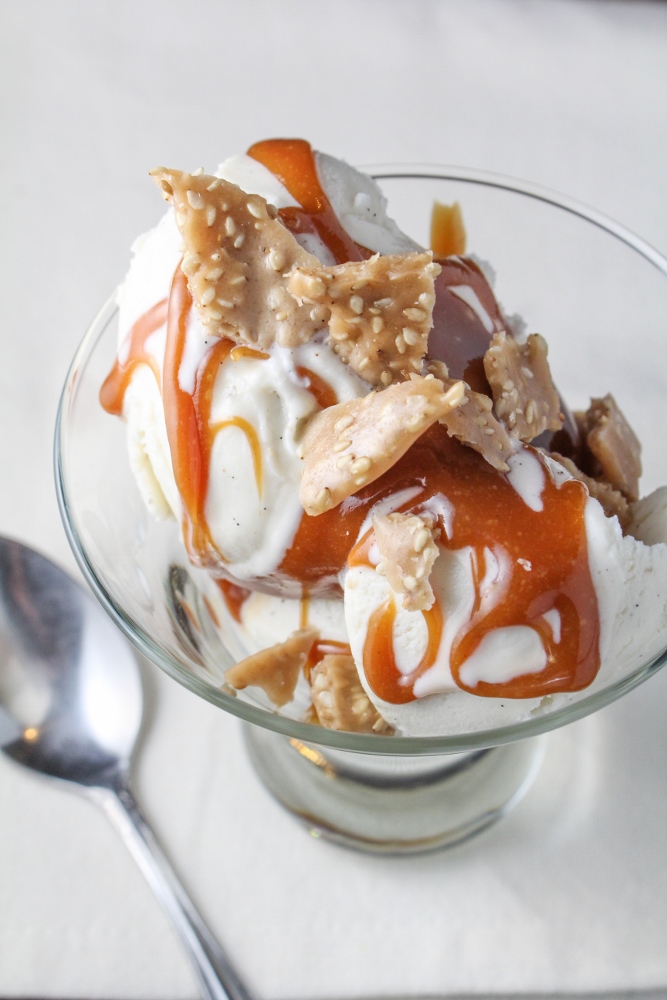 I decided to share this delicious new discovery with you in the form of a sundae. I mean, if the ice cream is “A Little Less Indulgent,” that just means you have an excuse to douse it in caramel sauce, right? This sauce is inspired by a dinner we had recently at Oleana, a Middle Eastern mezze restaurant in Cambridge that’s nearly impossible to get a reservation at (at least by Boston standards). We had a lot of delicious dishes that night, but the most memorable one for me was the dessert: Turkish-style Profiteroles with Sesame Cashew Caramel and Sesame Halva. It was amazing, and I couldn’t get over how addictive the sesame caramel sauce was, so I wanted to try making it at home. It ended up coming out just how I wanted to, so now I might have to make caramel this way all the time. Adding tahini to the caramel makes it that much more unctuous and satisfying, and it cuts the sweetness with its deep savory flavor. But as much as I love the sauce, I think the real star of the show might have been the Salted Sesame Butter Brittle, which I decided to make at the last minute to add crunch, and more sesame flavor. It’s a Ming Tsai recipe, and Ming Tsai is pretty much infallible in my eyes – this recipe was no exception. I was a little concerned by how opaque and soft the caramel mixture looked at first, and how long it took to color, but as soon as I bit into the hardened candy I knew I never should have doubted. It’s more like sesame toffee, really, and I made myself a little bit sick I ate so much of it. Lesson learned. Maybe. All together – the ice cream, the tahini caramel, the sesame butter brittle – it was a solidly delicious dessert. 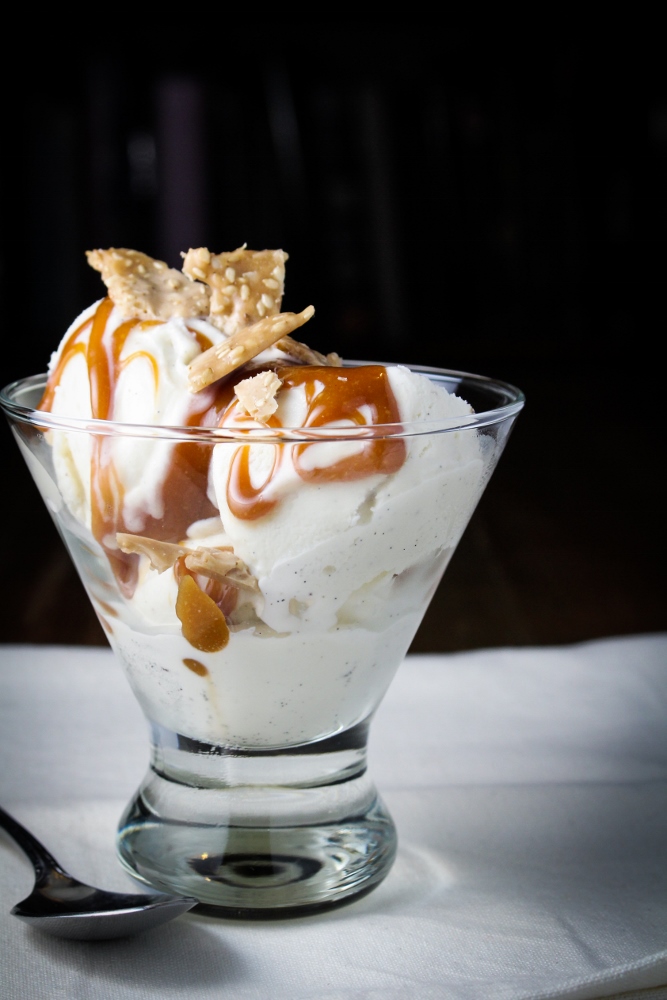 In other news, my blog is going through some growing pains this week – I’m finally biting the bullet and switching over to WordPress.org – so bear with me as I make some changes. Hopefully I’ll be able to unveil a flashy new custom design in a few weeks, but until then be warned that it might be a bit messy. And, as I think through how my content might evolve, I would love to hear if there are recipes or post types that you’ve enjoyed more than others! Shoot me an email or leave a note in the comments and I’ll be super grateful.

Disclaimer: I received a sample of Graeter’s ice cream free of charge, but I was not otherwise compensated and all thought and opinions are my own. 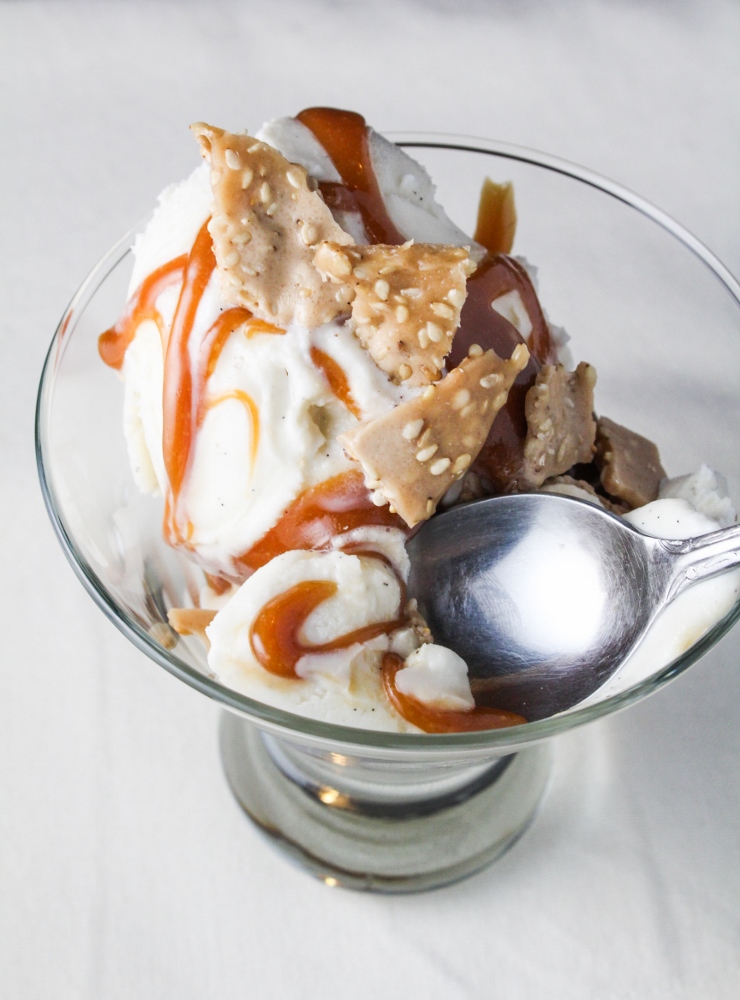