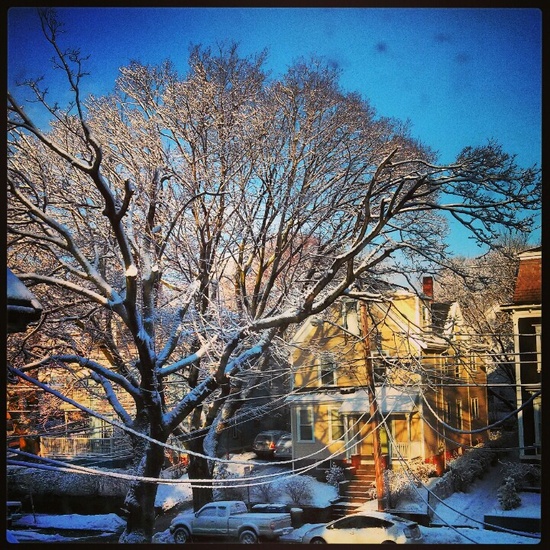 Now that two whole months of 2013 have passed, I just wanted to check in and share some of the things I’ve been doing, reading, eating, and loving, that may not have made their way onto the blog. I’m glad that it’s almost March, because March means spring, but there have been some good things about winter, too, and it would be a shame to forget about them.

Did you know I got my very first smartphone in January? Yeah, I know, I’m 3 years behind. Still, it’s awesome, and I may have been going a little bit overboard with Instagram… it’s just so fun! It turns out that most of the pictures I’ve taken recently are of gardening – one of the best things about this time of year is planning ahead to the summer and watching all the little tiny seeds burst into a much needed flourish of green:

1) Seeds arrived! All from Baker Creek Heirloom Seeds. 2) T planting the first batch of seeds. 3) First sprouts! Basil seedlings. 4) Eggplant, onions. 5) Impulse buying a key lime tree and an orange tree on a recent trip to Mahoney’s. 6) Peppers, varieties might be named after Game of Thrones. 7) Blossoms on my Meyer Lemon. 8) My Christmas present – an olive tree – before it lost all it’s leaves (don’t worry, I’m nursing it back to health)

It also feels like we got a never-ending amount of snow these past two months. First there was the blizzard (Nemo, if you must call it that), which mostly involved shoveling (and was the beginning of two full weeks of being sick for me), and it seems like every few days since then we get another few inches. I don’t mind snow, but in the city, it gets so slushy and gross so quickly. I’ve had my fill for this year. 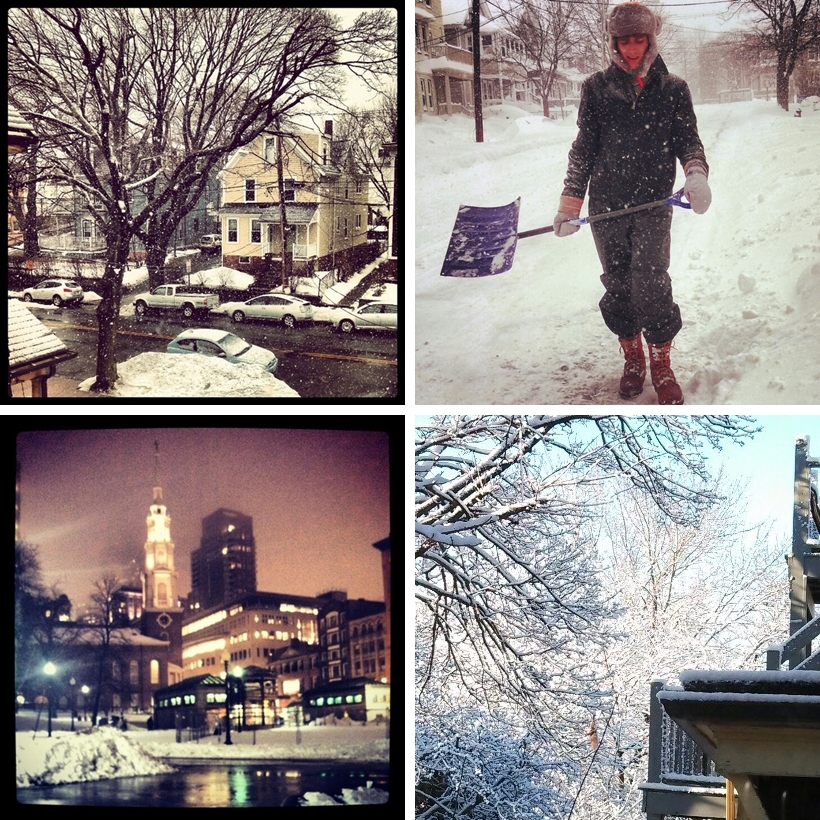 1) More snowflakes, sigh. 2) Trevor preparing to face the blizzardy streets. 3) Boston common in the snow and fog. 4) Pretty on the trees, if only briefly.

To stay warm, I’ve been filling up on plenty of hearty foods. A spicy chicken soup Trevor made for me, this vegetarian chili with chocolate from Green Kitchen Stories that I made for the Superbowl (during which I may or may not have watched an Anne of Green Gables marathon instead…), sausage and tortellini soup from Handle the Heat, and plenty of hot chocolate with Bailey’s.

And books! I’ve read a few really great ones recently. I just finished Exit the Actress tonight and it’s the only book I’ve read in a while that has had me up late at night reading. It follows the life of (real) historical figure Ellen Gywn, an orange-seller turned actress turned King’s favorite mistress. The characters and story are so compelling. I also read Pretty Birds, a deeply moving but disturbing account of the Bosnian War, told through the eyes of a female sniper. I think it had such a profound impact on me because it was so recent. A worthwhile read. Last, Fearless, which chronicles the journey of Freya Hoffmeister as she circumnavigates Australia in a kayak. Fascinating, and kind of makes me never want to go to Australia – too many ways to die. Now, she’s 407 days into her journey around the entire continent of South America – you can track her progress daily on her blog.

I’m realizing that this post makes me seem like I might be the most tame 23 year old on the planet – gardening, snowstorms, reading. I don’t have any pictures to prove otherwise, but I promise I did spend a couple nights out doing fun things as well. I even stayed up past 2am last weekend. Crazy. I’ll try to get some proof for you in the next few months that I’m not a little old lady. Until then!