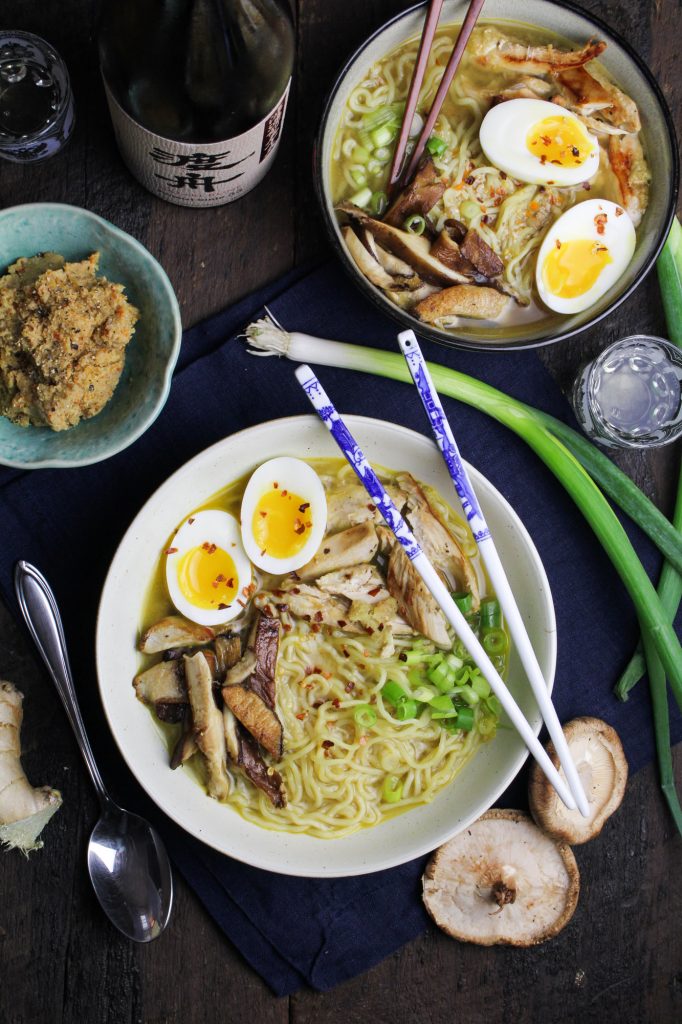 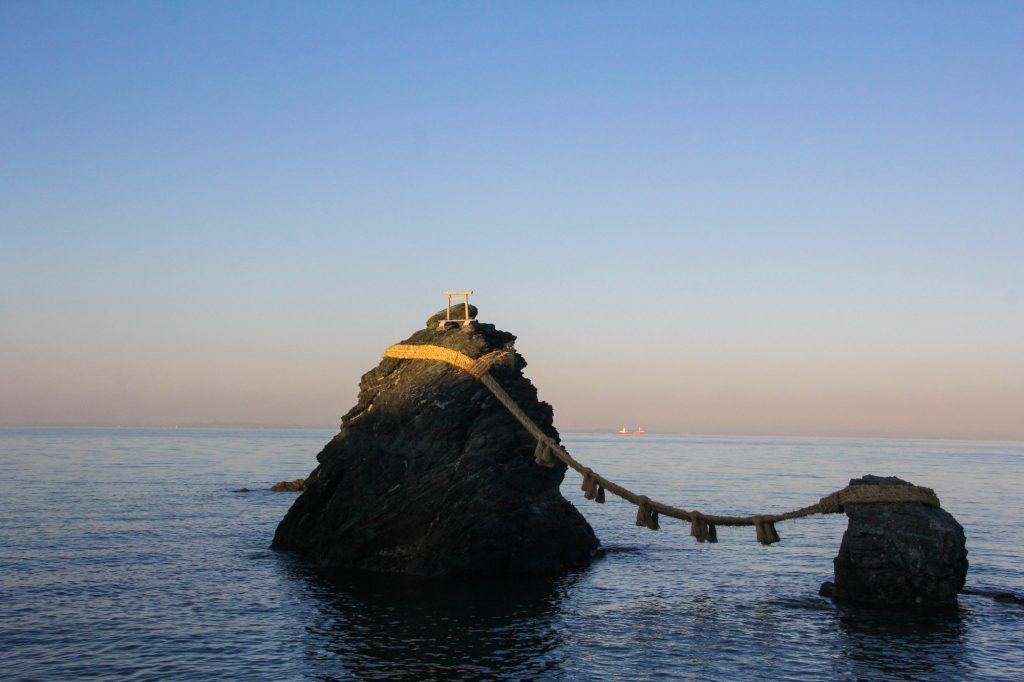 I had originally meant this recipe to be for my book review of Simply Ramen, a lovely new(ish) book with a great mixture of traditional and non-traditional ramen recipes by Amy of Easy Peasy Japanesey. But then I opened a bottle of sake to steam the chicken, and poured a few glasses, and Trevor and I sat down to these steaming bowls of ramen, and I couldn’t stop thinking about our time in Ise. So instead of a book review this post is the much overdo second part to our Japan travelogue, dedicated to our time in Ise, and a true review of Amy’s book will come later. (Warning: this is a long post, so if you’re just here for a delicious ramen recipe, skip to the end!) 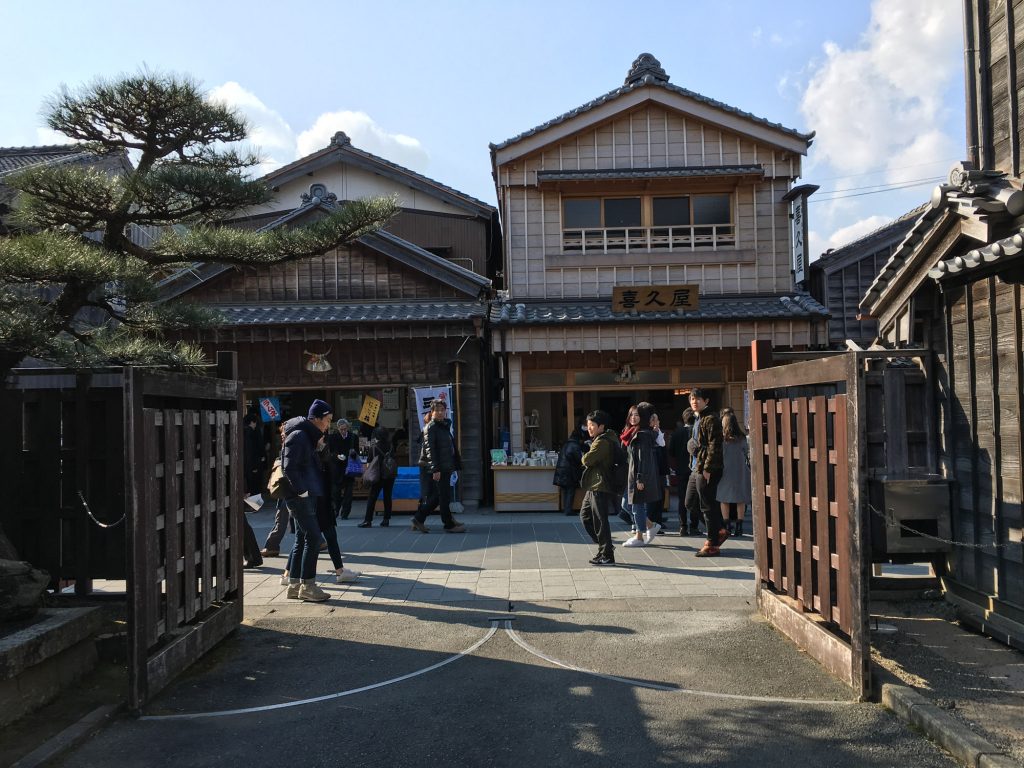 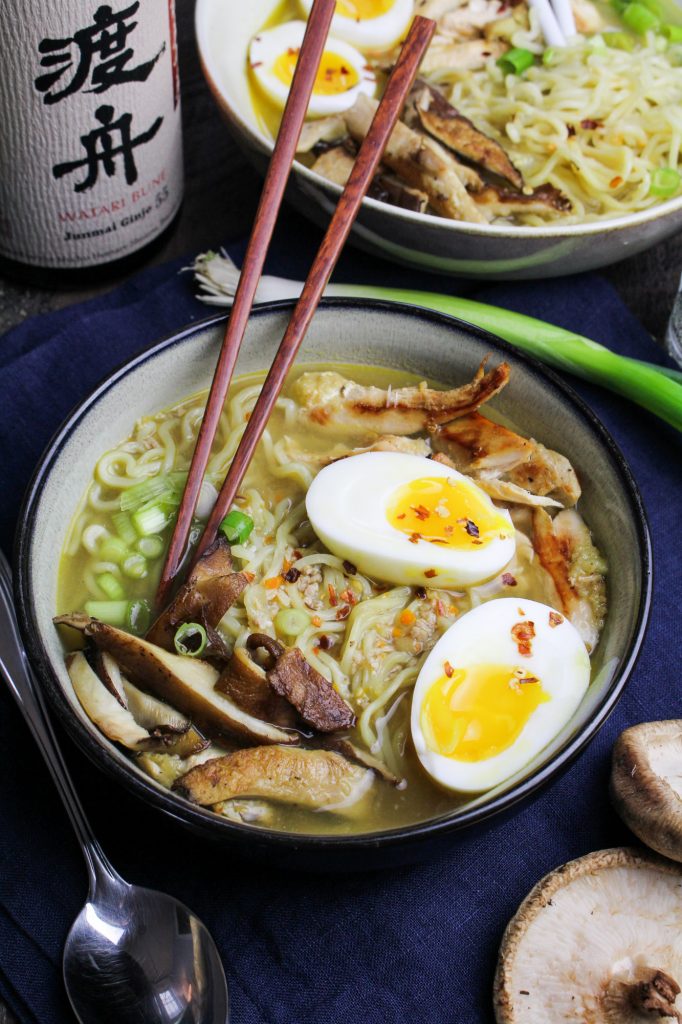 After our magical introduction to Japan in Kyoto, we wandered a bit off the beaten track, to the Ise peninsula, a coastal area about 2 hours southeast of Kyoto. Ise is the home of the Grand Shrine complex Jingū, one of Shinto’s holiest and most visited sites. Trevor had learned about the shrine and its architecture in college and it was at the top of his list for things to see in Japan. There were plenty of other visitors in Ise, but I would guess that 99% of them were Japanese, pilgrims coming to visit the shrines. English speakers became harder to find and we became more of a curiosity. 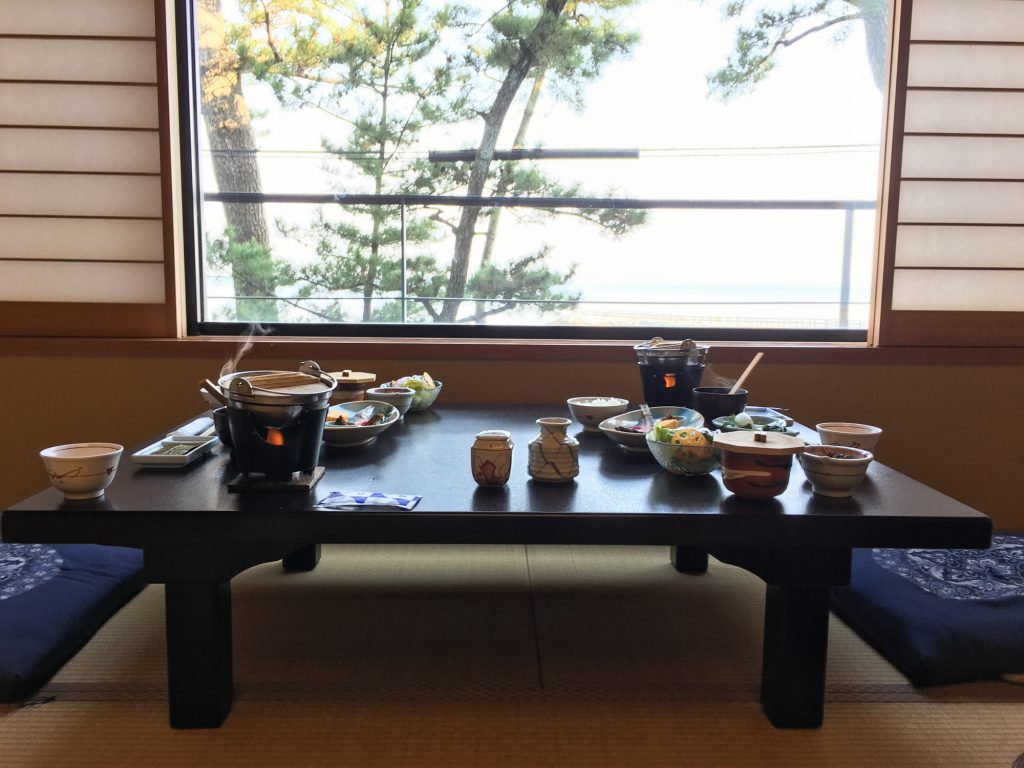 When I think about Ise, I think about sake, and blonde wood rooms, and strangely deserted beach resorts, and 500 year old sacred Cypress trees, and our ever-smiling pink-pajamaed Ryokan room attendant. I think about getting caught in a rainstorm in the middle of a frustrating and misguided walk from one shrine to the next, somehow finding ourselves in an Italian restaurant in one of those travel moments where everything feels like it’s going wrong, only to emerge to find the sun shining and realize that we were only 10 minutes from where we wanted to be. I think about sitting in the small basement-level restaurant in our hotel, using Google Translate to attempt an interpretation of the Japanese-only menu, and somehow successfully ordering two bowls of ramen. And I think about sitting alone, naked, in a steaming, outdoor Ryokan bath late at night, with icy cold winter winds whipping around the trees and the sound of the ocean pounding below. 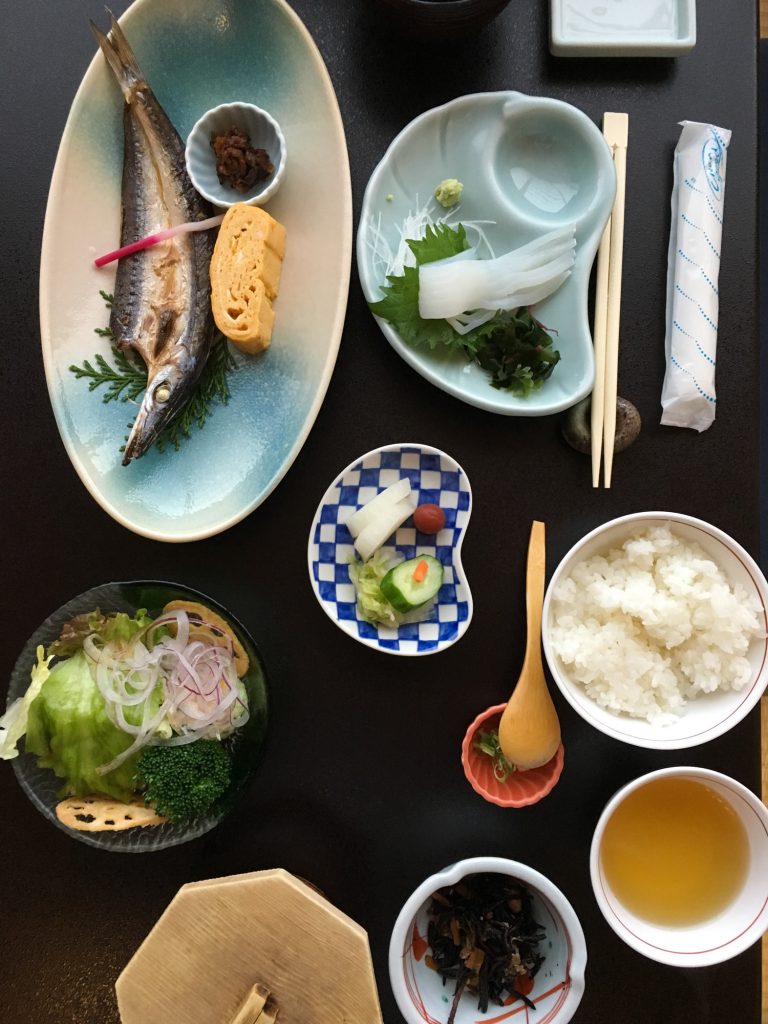 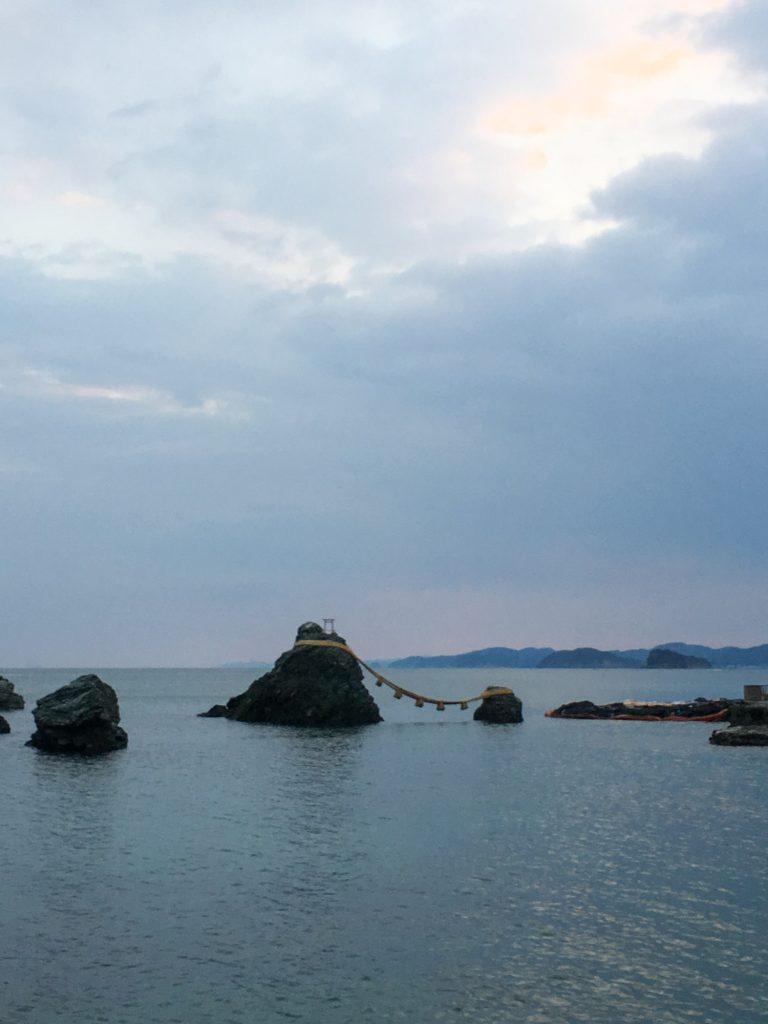 Our three days in Ise had two major components – a stay at a traditional Japanese inn called a ryokan and a visit to the grand shrines. A ryokan is more of an experience than just a place to stay – it has a whole set of traditions around it, and is widely considered a “must-do” while in Japan. We chose a mid-range ryokan called Oishiya right next to the Wedded Rocks (or Meoto Iwa). When you arrive, your room attendant greets you and takes you to your room, typically a spare, furniture-free room with a tatami mat floor and paper-screen walls. You are given a yakuta to change into, and then your room attendant returns to serve you tea. Our room attendant (I wish I could remember her name!) was such a lovely, smiling woman. She had a little note card with all of the English phrases she needed to say tied to her waist, and she giggled a lot and just made us feel so cared for, which is a big part of the ryokan experience. And then after that you… just relax. You’re not really supposed to do much other than visit the baths and wait for dinner. 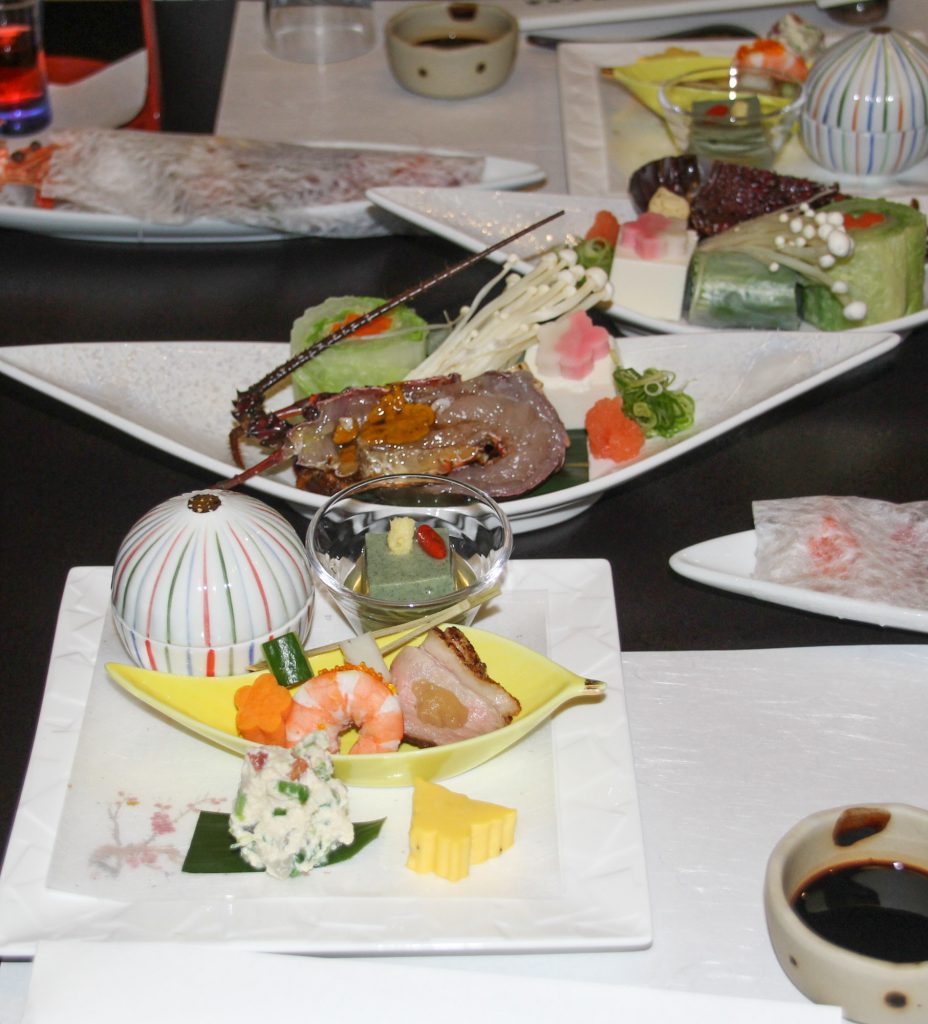 Dinner is served in your room, in a series of tiny, elaborately-plated dishes – ours included raw spiny lobsters that we cooked ourselves in boiling miso, fried fugu (blowfish) that I was too nervous to try, and two bottles of sake, which left us red-faced and giggly, sitting on the floor in our matching yakutas. I really enjoyed the dinner – it was so different and strangely intimate, a cross between a romantic dinner out and dining in, with an added element of discovery as I’d never tried most of the foods we ate that night. After dinner, our attendant pushed the table to the side and pulled out our futons, fluffing the comforters and pillows and practically tucking us in… and then we slept. Soundly. 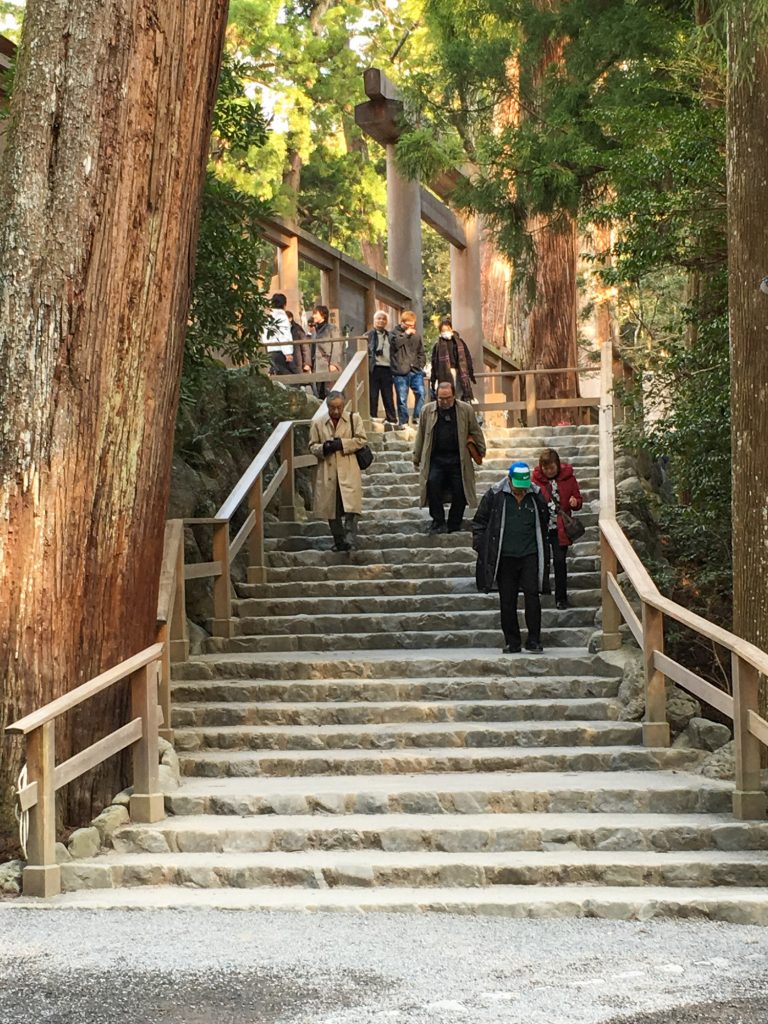 The grand shrines, the reason most people visit this part of Japan, were the center of our full day in Ise. For me, the shrines themselves weren’t the most interesting part of the visit – you actually can’t even see most of the shrine, as only the imperial family and a few select priests are allowed to enter the gates. What I found most fascinating was watching all of the other visitors, who clearly felt a certain reverence being there, and feeling myself to be part of a pilgrimage. It was also a lovely, sunny day, and the shrines are surrounded by forests with ancient trees and a wide and winding river, so I enjoyed the walking as much as anything. Outside the inner shrine, Ise Naiku, there is a small, traditional town called Oharai-machi, which includes a pedestrian street filled with food vendors and shops. It is more a recreation of a traditional shrine town than a contemporary one, but walking down the main drag, sampling fried oysters and local beers and window shopping, was a highlight of the visit for me. We even managed some non-verbal conversation with a group of young Japanese men we were sitting next to who didn’t like their beer and wanted to share it with us. (Key words – “oishii?” “ie oishii” “arigato!”) 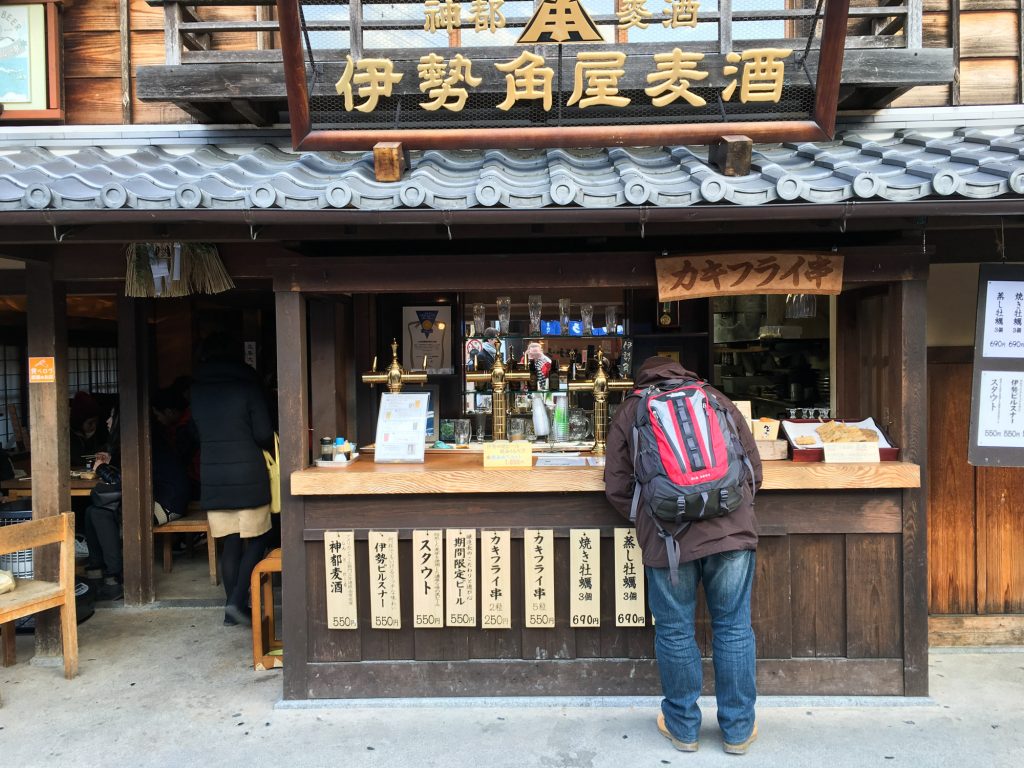 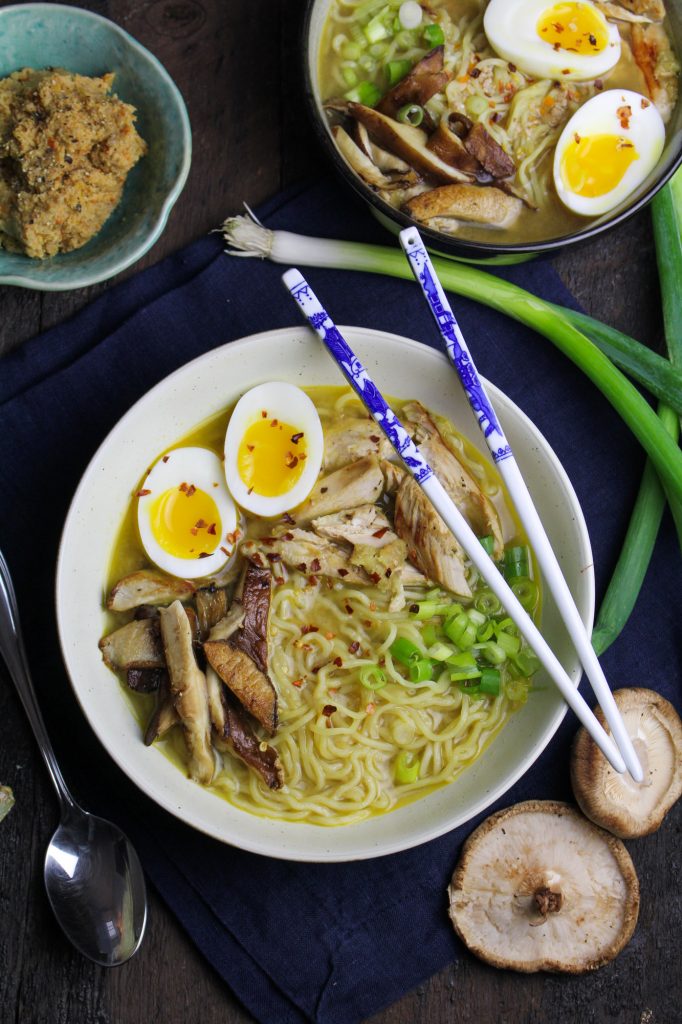 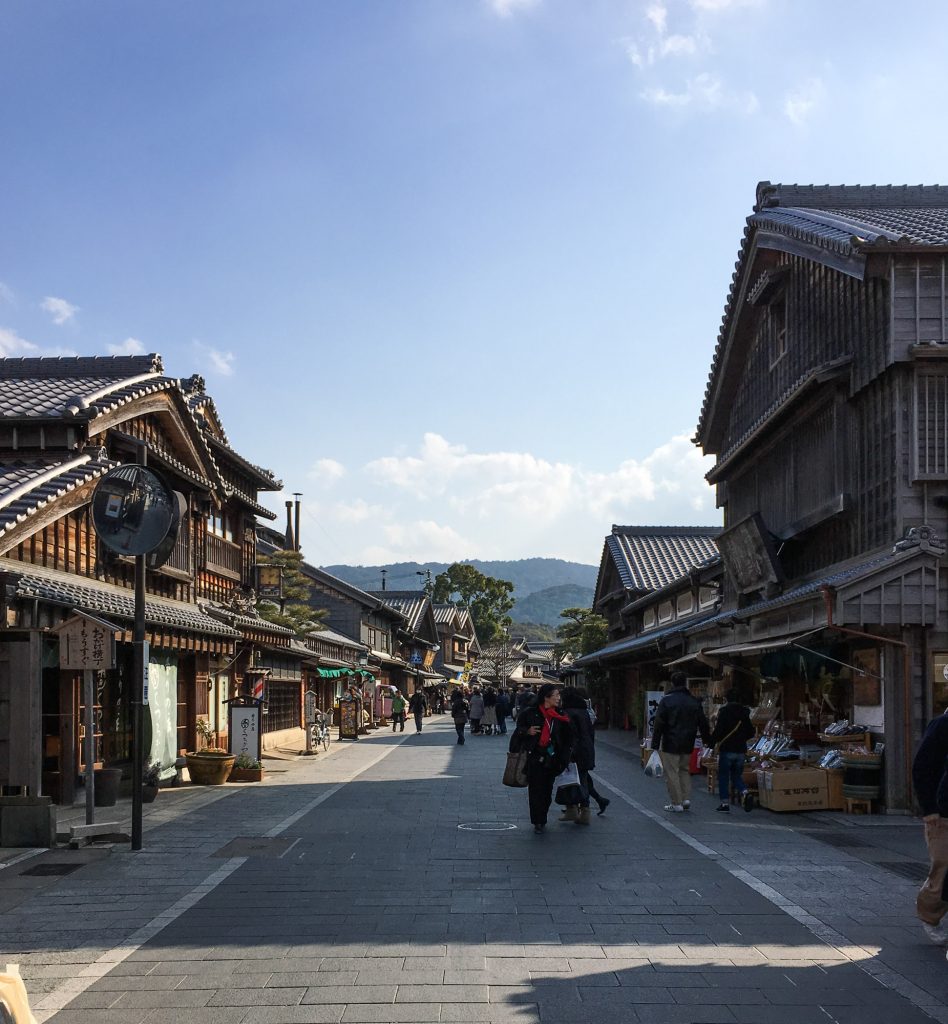 From a practical standpoint, visiting Ise was the most complicated (and frustrating) part of our trip. Getting there required advanced train navigation (JR passes, probably the most popular way to get around Japan for foreigners, only work on Japan Railways lines, which thinned out considerably on the Ise peninsula), we switched between two hotels (perhaps a misguided decision, but we weren’t sure two nights at a Ryokan was worth it for us), and communication became difficult. But looking back, it also provided some of the most memorable and unique experiences. If you’re also headed there, a few tips: 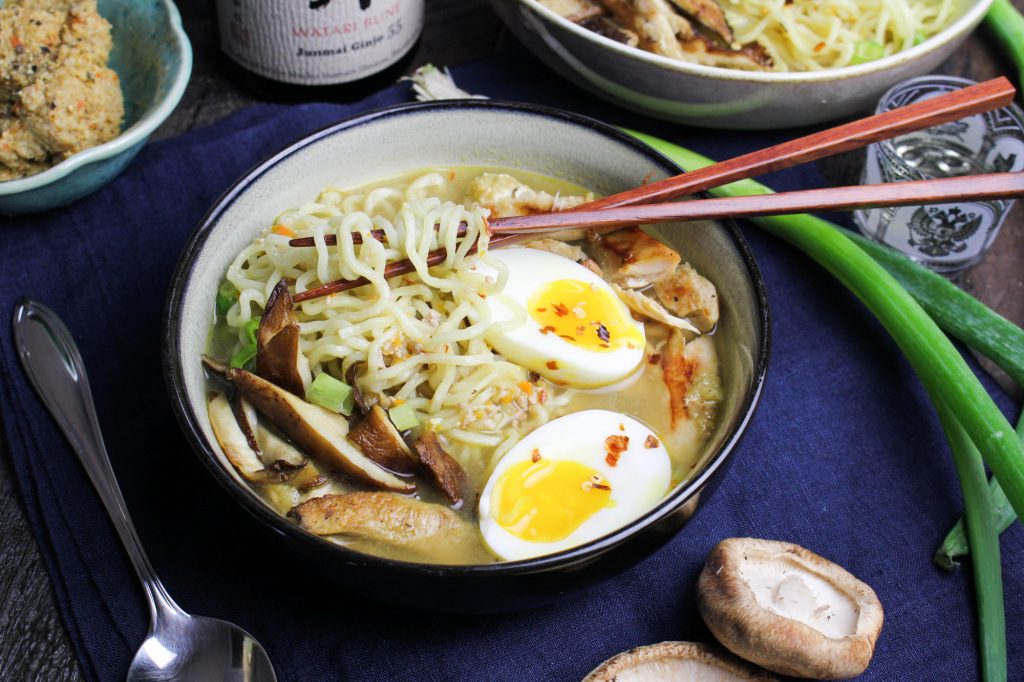 This is the third ramen recipe I’m posting here, and this one, far and away, is the closest to the real deal. The miso base is made by blending together aromatic vegetables, ground pork, a healthy amount of bacon fat, and two kinds of miso paste (the real stuff, not the minute miso that comes in a bottle). The base is simple to make, and once you have it, you have the key to practically instant ramen bliss. A few spoonfuls of the intensely flavored miso base stirred into good chicken broth makes a cloudy, salty, deeply savory ramen soup. Beyond the noodles (essential), you can top it with pretty much whatever you want. For this version, I’ve topped it with Amy’s ginger-and-sake steamed chicken (delicious on its own, as well), a few sauteed shiitake mushrooms, and a soft-boiled egg. It’s one of the most satisfying things I’ve eaten in the past few months. Luckily, having a tupperware full of the miso base stashed away in the freezer means I can experiment with toppings to my heart’s content for the rest of the fall. 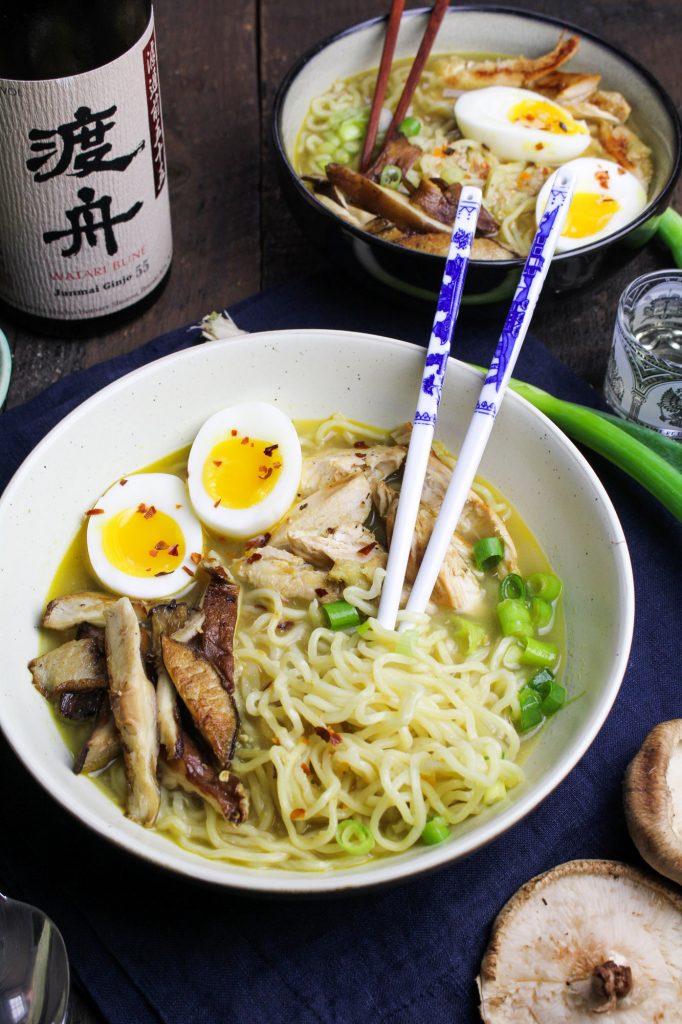