I’ve imposed a ten day baking ban on myself.  And the next three things I post on this blog will be healthy, energy-inducing, balanced meals.

These drastic measures are a direct result of the evils of facebook.  Because maybe Trevor and I were indulging in a little trip down memory lane via backwards facebook stalking.  And maybe around 6 months ago a disturbing presence began to make itself known.  And maybe that presence was the gradual rounding of my face.  And arms.  And legs.  But mostly face.  And you know, this really isn’t that surprising (see danishes, brownies, tapioca), or truly that alarming (yet), but it still needs to be remedied.  Gotta nip it in the bud before I get too old to do anything about it.  Actually I’m just depressed by the fact that when I get to Maine (tomorrow!) my skinny little brothers and marathon running mom and five soccer games a week dad are all going to be able to run a 5k faster than me.  We’re competitive.  (Once, I took my best friend Steph along to a family picnic, after which my entire family started competing in races – running, cartwheeling, hopping on one foot.  She was completely baffled.)

So, the three sticks of butter recipes are going to have to be put on hold for a while, and we are going to focus on minimal butter consumption, healthy activities.  Like running.  Let’s talk about running.  Let’s talk about how much the first two runs suck when you decide it’s time to get in shape after a 2 month hiatus (I know, two whole months, but it’s just been too hot here to focus on exercise.  And there’s been more exciting stuff to do.  See drinking in the pool.)

So there, that was my little motivating moment for myself.  And maybe for you, too.  Because really what inspired all those thoughts was this thought, that I huffed and puffed to Trevor on the first run in a while: “How much would it suck if you’d never done this before and you didn’t know how good it could get? That running could be something beyond pain?  That it could be empowering, enjoyable?”  (Well, maybe I only said the first of those sentences out loud.)  And I kinda wanted someone out there struggling with all the initial suck to know that it’s totally worth it.

Now that that’s out there, let’s move on to the grub.  In my mind, this is the perfect black bean recipe – saucy, spicy, and a little bit sweet.  I know a lot of people aren’t huge bean fans, but I could eat these for days.  They fit all of my criteria – cheap, healthy, and delicious.  This particular recipe is the creation of Rebecca from Foodie with Family, which she has graciously allowed me to share.  The bean recipe itself is very healthy, coming in at 265 calories, 10 grams of fiber, and 10 grams of protein per serving.  (See bottom for rough nutritional and cost analysis.)  I’ve turned them into enchiladas which are less healthy but more satisfying when you want a full meal, and that still have all the nutritional benefits of the beans, tomatoes, and herbs.  These beans are also killer over couscous if you’re looking for a happy medium recipe – a full, balanced meal, without the not-exactly-diet-friendly tortillas and cheese.

So that kicks off our healthy streak.  Try these, let me know what you think, and get excited for the next healthy recipe – it’s the perfect late summer meal and one of the best recipes I’ve tried all year.  Happy healthiness. 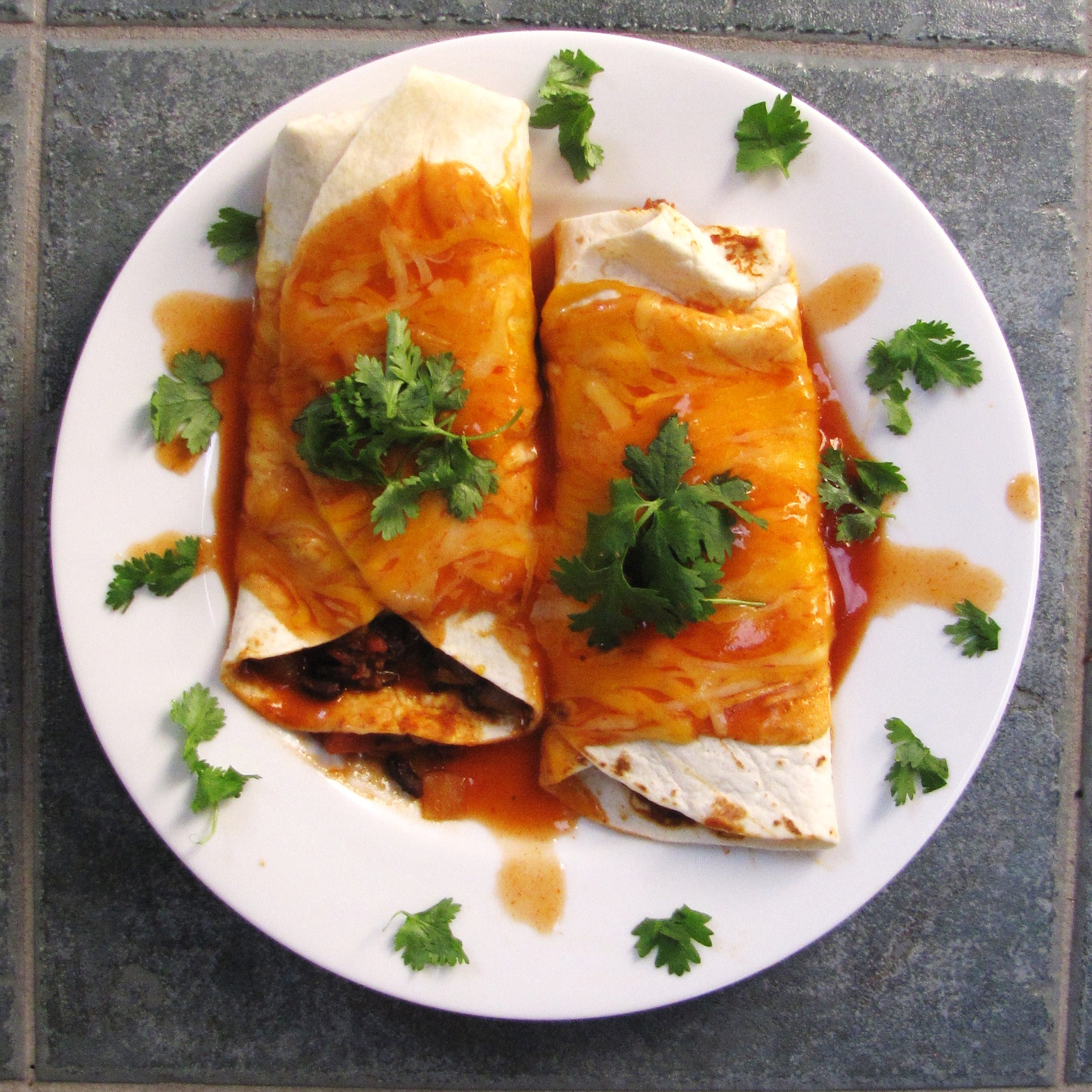